After five weeks without a game for his club, Miguel Almiron was back in the Newcastle team for the 1-1 draw with Brighton.

A point gratefully received for Newcastle United but a bit of an anonymous performance from Almiron as he was subbed off on 74 minutes in favour of Joelinton.

Joining up with Paraguay for vital World Cup qualifiers, Miguel Almiron hoping for a return to form for both himself and his national side.

The October internationals had seen a promising goalless draw followed up by defeats to Chile and Bolivia, major setbacks for the chances of qualification to Qatar.

In the early hours of Friday morning (UK time), Miguel Almiron played what looked a key make or break World Cup qualifier, that they had to win to have any realistic chance of still getting to those finals next November and December.

Instead, it was disaster for Miguel Almiron and his international teammates. Despite playing at home they were dominated by Chile and only had 39% possession and two efforts on target in the entire game. The Newcastle player well under par, eventually subbed on 84 minutes and only a yellow card to show for his efforts.

Chile had taken a 56th minute lead via a Silva own goal and that proved to be the winner, leaving the South America qualifying group for Qatar looking like this on Friday morning: 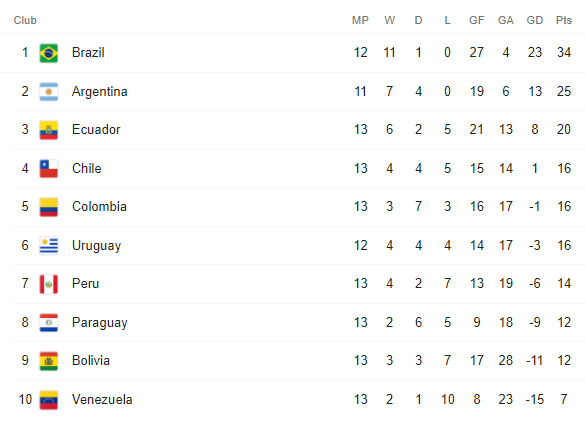 The top four qualify automatically for Qatar whilst the fifth goes into a play-off. As you can see, after this disastrous result, Paraguay are now third bottom and realistically a mountain to climb to have any chance of qualifying now.

Despite those defeats to Chile and Bolivia in October, a win in this return match against Chile would have kept them in with a chance in sixth place on 15 points, two points ahead of Chile. Instead, it is four points off qualification and a block of three all on 16 points, including Uruguay with a game in hand.

Before heading home to Tyneside, Miguel Almiron and his Paraguay teammates play away against Colombia, a match that will finish in the early hours of Wednesday morning (UK time). After three defeats in a row and not a single goal scored in over seven hours of football, difficult to see Paraguay suddenly putting together a run to take them to qualification. Particularly when after Wednesday’s match their next game is away against all dominant Brazil, with then just three further group matches to play.

For Newcastle fans, Miguel Almiron begins his lengthy journey back to Tyneside sometime on Wednesday at the earliest from Colombia. This means he will likely have at the most only one training session under new Newcastle boss Eddie Howe before the massive relegation clash with Brentford in eight days time, surely meaning he has no chance of selection in that starting eleven.

Elsewhere on the international front, Martin Dubravka finds himself still looking for his first action for club or country in five months. Slovakia could no longer qualify anyway for Qatar and the Newcastle keeper was left on the bench as Slovakia drew 2-2 at home to Slovenia.

For Emil Krafth, he has suddenly found himself getting a regular game for both club and country. Last night he found himself playing right-back for Sweden in a back four against a struggling Georgia, the Swedes only needing a point or better which would have left them as automatic qualifier for the Qatar World Cup finals if they avoided defeat against Spain in their final group match. However, a shock 2-0 defeat away against Georgia has meant Emil Krafth and his teammates have to go to Spain on Sunday and win, if they are going to top the group and automatically qualify. They are though already guaranteed a play-off place for the finals at worst.

The biggest ‘success’ for Newcastle’s international players was Jeff Hendrick, he played the first 79 minutes before being subbed, as the Republic of Ireland managed a goalless draw at home to Ronaldo and Portugal. Ireland’s chances of World Cup qualification ended a long time ago.