Jonas Gutierrez has finally called it a day.

At the age of 38 years four months and ten days, the Newcastle United cult hero played his very final match on Tuesday.

Having joined them in July, Jonas Gutierrez now ends his long and distinguished playing career with Almagro, the club that he supports, based in Buenos Aires.

Tuesday’s game was at home against Ferro Carril Oeste, in the final round of games in the regular league season in Argentina.

Ahead of this final match of his playing career, Jonas Gutierrez referring to it yesterday as ‘The Last Dance’ via his Twitter account:

Restricted to only sub appearances in the league for Almagro, Jonas Gutierrez had came off the bench six times since arriving in July and he remained unbeaten so far in the matches he had featured in. 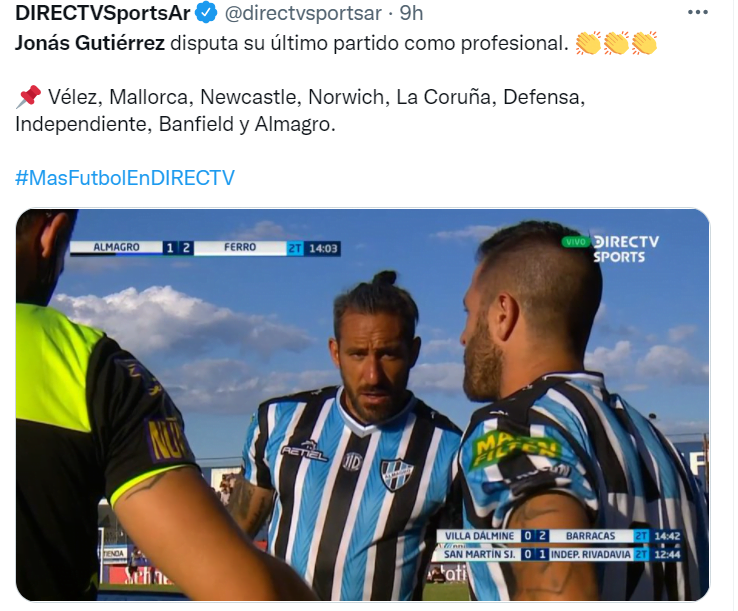 However, Ferro Carril Oeste hadn’t read the script, Jonas Gutierrez coming off the bench on 61 minutes with his team trailing 2-1 and whilst Almagro did score late in added time, the former Newcastle star ended his career with a 3-2 defeat as the visitors had scored a third on 80 minutes.

The result not a massive surprise as Ferro Carril Oeste needed a win to stand a chance of finishing top of the Argentine second tier, whilst Jonas and his teammates started and ended the game in ninth place. The visitors ending up runners up though anyway, as top of the table Barracas Central won their final league game as well.

So good luck to a real NUFC cult hero, somebody who will always be welcome on Tyneside.

Always gave his all on the pitch and a key player in that fifth place Premier League season of 2011/12.

Whilst off the pitch he was also very popular with both fans and the other players, a larger than life character.

He also had real bottle, not only overcoming the nightmare of finding out he had testicular cancer, but also standing up to Mike Ashley.

Maybe the most shameful Ashley NUFC moment of all (against some VERY stiff competition), the former Newcastle United owner found by a tribunal to have discriminated against Jonas when he was recovering from testicular cancer.

The tribunal finding that Mike Ashley had ordered John Carver not to play Jonas Gutierrez in too many games, so the cancer sufferer wouldn’t trigger an automatic contract extension.

Not only has Jonas Gutierrez had cancer to deal with but at the age of 35 he suffered a horrific injury in 2018, a ruptured patella tendon in his left knee when playing for Defensa Y Justicia. Many thought he would retire.

However, the former NUFC star fought back and got fully fit, moved on to Banfield and unbelievably suffered the exact same injury but to his other (right) knee in 2019, aged 36. Once again, many thought he would retire, only for Jonas to get fully fit again and play.

To have come through so much and still bounce back, to still enjoy his football as he moved past his 38th birthday, what a player and what a man Jonas Gutierrez is.

A total professional and somebody who just loves playing football, the former Argentine international giving so much back to club football in his home country – the former NUFC star at his fourth club in Argentina (via Deportivo La Coruna) since leaving St James Park – Independiente, Defensa y Justicia, Banfield and then Almagro.

Hopefully we can now see Jonas Gutierrez back at St James Park as a very special guest soon, now that Mike Ashley is no longer a factor and with his playing career at an end, Jonas with the chance to have time for a trip back ‘home’ to Tyneside.

Jonas Gutierrez speaking after his last ever NUFC match, Newcastle 2 West Ham 0 back on 24 May 2015:

“Since I arrived at Newcastle the fans were fantastic with me and the team.

“To be honest, they (the fans) don’t deserve to have this problem, this situation, Newcastle is bigger than this.

“To be honest, a few months ago I didn’t know if I was going to play football again and now I am back, I’m playing football, I have a second chance in my life.

“I am really proud to be a Geordie and it was fantastic to be here today.”