Premier League clubs this week found out the result of the latest TV rights auction in the United States.

This represents almost double what the current six year deal pays that was agreed in 2016, up to 2022.

NBC have held on to the US rights BUT due to the bidding competition, had to almost double their money.

So what does this mean for Newcastle United and the other Premier League clubs?

Well, until very recently, all money from overseas TV deals was equally shared between the 20 Premier League clubs, unlike the UK domestic TV deals which depends on where you finish in the Premier League table and how often you are chosen for live TV (in the UK).

However, with the usual suspects, the self-appointed elite and powerful Premier League clubs, recognising that whilst the UK TV deals were set to plateau or even go down whilst the overseas ones were set to keep on going up, they forced through a change.

So there is no longer an equal share out of overseas TV money amongst the 20 clubs, instead it depends on where you finish in the table.

Football finance expert Kieran Maguire has now shown what this represents in terms for how much this would mean for each of the 20 Premier League clubs based on their current positions in the table: 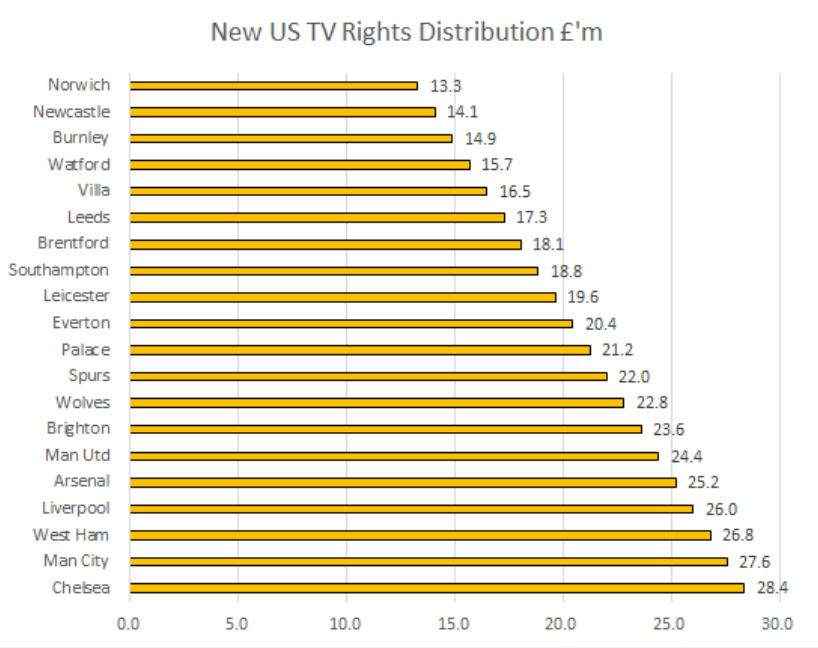 The new US TV deal doesn’t kick in until next (2022/23) season but this illustration above, shows just what an impact that change has had, which was forced through by the self-appointed elite. Instead of an equal share out, those at the very top getting more than twice what those at the very bottom will bank. Remember as well, the above table represents only what the amounts of cash will be from the US TV rights, with all the other overseas TV deals to be added on top.

Here’s hoping that Newcastle United are in that 2022/23 Premier League season AND start to make inroads into taking money off those in the self-appointed elite.

‘The American broadcaster NBC has renewed its television deal with the Premier League in a new six-year agreement worth £2bn. That is almost double what the company, the home of Premier League coverage in the United States since 2013, paid for their current contract in 2016.

The new deal, understood to be worth $2.7bn (£2bn), goes some way to offsetting the £2bn Premier League clubs have lost since the start of the pandemic. Over the next three years the Premier League will filter £1.6bn down the football pyramid, having on Thursday announced a further £25m of Covid impact funding to clubs in Leagues One and Two and the National League.

The Premier League has completed its international broadcast sales processes in Europe, the Middle East and Africa but there are deals in the rest of the Americas and Asia Pacific to be concluded and further increases in revenue would see solidarity payments to EFL clubs go up.