Fabian Schar shows international excellence…how can he not get in this Newcastle United defence?

Fabian Schar got the chance on Friday night to remind us of the quality he possesses.

Only two Premier League starts for Newcastle United this season and not a single minute on the pitch since September, totally sidelined by both Steve Bruce and Graeme Jones.

Despite that lack of time on the pitch, Fabian Schar stepped out in Rome and gave a superb performance, hopefully Eddie Howe was watching on…

Level on points at the top of Group C, Italy a two goal GD advantage, the penultimate group match saw Switzerland with a tough ask.

However, Newcastle’s Fabian Schar and his Swiss teammates rose to the challenge and pulled off a 1-1 draw, to send things through to the final group games on Monday. Switzerland taking the lead through Widmer on 11 minutes and Di Lorenzo equalising on 36 minutes. Italy restricted to only four shots on target but a late scare in the last minute, Ulisses Garcia giving away a penalty but Chelsea’s Jorginho failing with his spot-kick, unlike the one he scored in the 3-0 win at St James Park recently.

That now leaves Group C looking like this on Saturday morning: 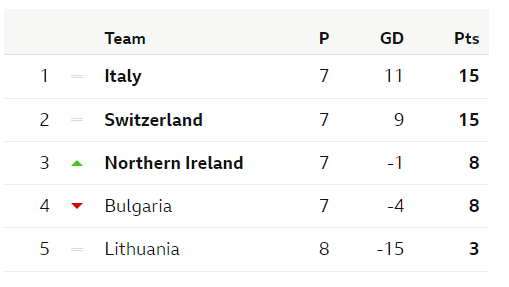 Jamal Lewis played the final 20 minutes for Northern Ireland on Friday night as they reclaimed third spot but obviously chances of qualifying for Qatar long gone. A 1-0 home win over Lithuania courtesy of an own goal.

Fabian Schar now looks forward to a massive Monday night and hoping Jamal Lewis (another player hoping to get a chance under Eddie Howe, not a single PL start these past nine months under Bruce and Jones) and Northern Ireland can give a big helping hand. Switzerland guaranteed at least a play-off now for Qatar but still with a real chance of overtaking the Italians, with Northern Ireland’s help…

It would be interesting to know what was going through Ryan Fraser’s head as he no doubt watched Scotland taking on Moldova last night.

The Newcastle player pulling out of the Scotland squad due to a calf injury but both media and fans north of the border questioning the withdrawal, when Fraser was seen training through the week with the NUFC squad.

A 2-0 win in Moldova has confirmed their play-off spot for Qatar, Group F looking like this on Saturday morning: 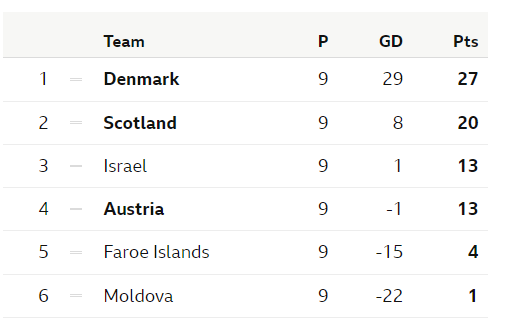 Scotland complete the campaign against Denmark at Hampden Park on Monday, the Scots likely to need a point to get a home semi-final in the play-offs.