Brighton fans comment pre-match on Newcastle United – Most excitable (obsessed?) they’ve ever been?

This is the longest ever period that Brighton fans have watched their team in the top flight of English football.

Having been promoted behind Newcastle United back in 2017, this is their fifth consecutive season in the Premier League.

Indeed, their only other spell of top flight football was four decades ago, promoted in 1979 and lasting four seasons before relegation.

Fair to say though that as things stand, Brighton fans have more optimism than Newcastle supporters when it comes to seeing their team still in the Premier League next season.

If they do remain in this division, or indeed prove something far better than just survivors, they will be totally indebted to one man…and no, it isn’t Graham Potter.

Instead, that man is Tony Bloom, the sugar daddy who has bought the Brighton fans such (relative) success.

If you question that, just have a look at this table that has been compiled by the excellent Swiss Ramble who specialises in the business of football.

He (Swiss Ramble) looked at the net finance provided by the owners of Premier League clubs from 2010 to 2020. 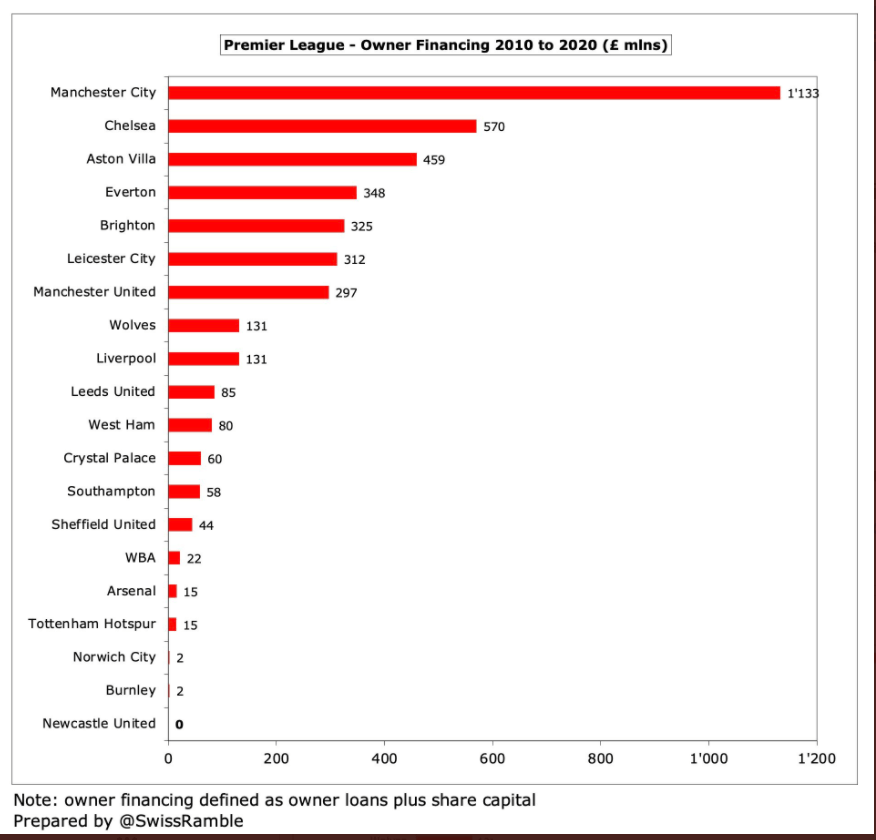 As you can see, Brighton fans benefiting to the tune of £325m when it comes to their owner pumping cash into the club, as compared to the big fat zero for Newcastle United under Mike Ashley.

Brighton fans aren’t renowned for their support but I have to say, I’ve never seen them so animated since well…ever.

As Newcastle fans finally are released from Mike Ashley’s zero ambition decade and a half ownership, the new NUFC owners have certainly attracted the attention of the Brighton fans…

Brighton fans commenting via their North Stand Chat message board:

‘Let’s destroy them. Always hated the over inflated egos of nufc fans and hate them even more for selling their soul to a corrupt and murderous regime.’

‘Looking forward to chanting abuse at the Newcastle fans while part of a collective of 30,000 but not chanting anything while they continue to chant about how sh.te our club / city is compared to theirs in the train queue.’

‘Very excited about the prospect of handing the saudi blood money laden toon their a.ses on a plate but very worried about slipping up and letting ourselves and all those others hoping we win this one down!’

‘Is there an anti-House of Saud banner being unfurled at the match? We have to show solidarity with Palace fans (ideally by producing a better banner than they had).’

‘Gloves off for this one- Al-Rumayyan, Staveley, McPartlin, Donnelly, your boys are in for a hell of a beating!

What could go wrong?’

‘Our only convincing win this season has been against Watford. I’m hoping Saturday will bring up our second.’

‘Ultra positive 3-0 to the good guys, this could mean it will end with disappointment.’

‘Hoping for 2 nil to the Albion with bonus of pelters directed at the Toon all afternoon.’

‘Im expecting goals in this.. ASM and Wilson will be a handful but their defence is very leaky. I expect Trossard / Maupay/ Lallana/ Biss to have a load of chances. Whether we can put them away is another story.’

‘I don’t think I’ve ever wanted to win a mid-season game as much as I do this one.

Which leaves me VERY nervous, as I am far from confident. This is exactly the type of game we usually stumble over.

I prediect a boring 0-0 but very much hope to be wrong (in the right way).’

‘I hope the Palace banner has been loaned to the SWC. Hate crime my a.se, that banner needs to tour PL grounds for every NUFC away fixture.’

‘Really hoping our recent good performance levels, and their poor ones, coincide for an absolute drubbing of Geordie Arabia.’

‘3 points, 90 more minutes of the most beautiful Brighton football in our history. Beating Newcastle and helping relegate them as one in the eye for the Saudis.’

‘Down with the Saudis

You’re going down with the Saudis.’

‘Will be watching in a pub opposite Newcastle Central Station

‘Every one is talking as if the three points will just be a formailty. Newcastle won’t roll over that easily, and they have forwards, Wilson and Saint Maximin particularly who are well capable of scoring goals.’

‘I’m more fearful of Complacency than the likes of Saint Maximin. I also don’t think that sport and politics should mix…….oh go on then, ‘you’re getting dismembered in the morning’

‘Singing the name of ‘Jamal Khashoggi’ in the 59th minute maybe? Shall we?’

‘I wonder if seeing Eddie Howe on the touchline will act as a spur to the Newcastle players, Callum Wilson for one will want to impress his new, (and old), boss with a goal.’

‘Now let’s see how good Howe really is, especially as he’s up against Potter and our team is developing a really strong mentality, as demonstrated when 0-3 and 0-2 down to two of the best three teams in the league.’

‘Whoever you are and no matter if you have a face covering or not, I hope you all give the Toon Utter Abuse all afternoon.

I have never wanted a team to be relegated as much as this shower of sh.t.’