Alan Shearer has been picking the best players he ever played alongside.

It is the latest Match Of The Day Top 10 for Gary Lineker, Micah Richards and Alan Shearer himself.

The three picking their best elevens made up of former team-mates, for their latest MOTD podcast.

Asked to choose ten to play alongside him, for Alan Shearer there are five former Newcastle United players in his greatest ever team, including himself.

That team being (and at which clubs Alan Shearer played with each player):

The Alan Shearer greatest ever team: 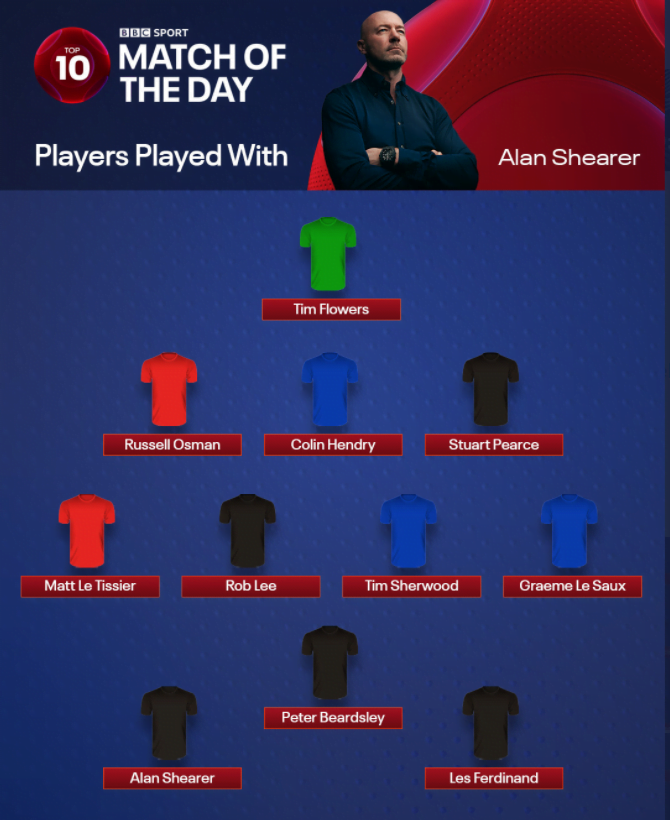 Heady days when thinking back to when we had the likes of Alan Shearer, Peter Beardsley, Rob Lee and Les Ferdinand playing for Newcastle United.

Stuart Pearce did ok for United when in the later stages of his career but fair to say that it will be their together with England, that secured Pearce’s place in this Alan Shearer team.

As for any glaring omissions?

Maybe not so much a glaring omission but I bet Alan Shearer would have thought long and hard about Shay Given, However, Tim Flowers did win the Premier League title with Shearer when at Blackburn together.

In the other two teams, Micah Richards selects no former Newcastle players, though Gary Lineker chooses two. Paul Gascoigne who he was with at Tottenham, as well as Kevin Sheedy from his Everton days.