As Head Coach he oversaw his latest shocking performance and defeat as Newcastle United boss.

It has also proved to be his last defeat with Newcastle, as on Wednesday morning the club announced that ‘mutually’ they had agreed he should be sacked.

So just how good a manager (head coach) has Steve Bruce been over these past 1000 matches?

Analysis and table by BonusCodeBets of managers to take charge of 1,000 or more games (which includes at least some matches in the Premier League / English top tier):

Only Tony Pulis has a worse record than Steve Bruce amongst top-flight managers with 1,000 games to their name, research from BonusCodeBets has revealed. 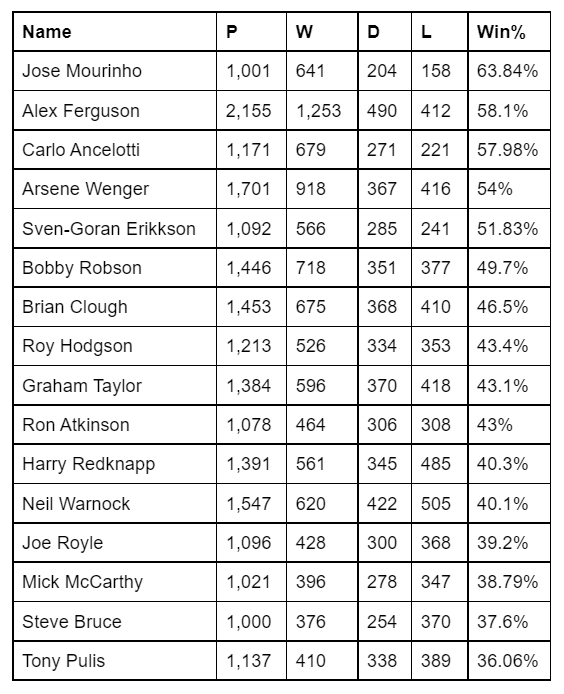 The Newcastle boss brought up his 1000th match as a manager with a 3-2 defeat against Tottenham on Sunday.

And that was his 370th loss in a managerial career spanning over 20 years, which leaves his win ratio at 37.6%.

Former Stoke and West Brom manager Tony Pulis is bottom of the list with a win percentage of just 36.06% from 1,137 matches, while Mick McCarthy has achieved a slightly more impressive 38.79% across his long career.

At the other end of the table, Jose Mourinho boasts the best win percentage by some margin (63.84%), though Sir Alex Ferguson’s 58.1% win ratio came from almost twice as many games during his 26 years in charge of Manchester United.

Carlo Ancelotti (57.98%) and Arsene Wenger (54%) are also amongst the most consistent managers to have graced England’s top flight.

Meanwhile, there is little to separate veterans Harry Redknapp and Neil Warnock (40.3% and 40.1% respectively), and the recently-retired Roy Hodgson sits on a commendable win ratio of 43.4%.’