Like a moth to the flame, I know it will do my health absolutely no good, BUT I can’t stop myself having a look / listen to what Steve Bruce has said this time.

An absolutely horrendous performance against Wolves, who hadn’t scored or picked up a point at home all season.

All too predictably Newcastle turn up, after a few minutes of enterprising play Steve Bruce quickly goes negative and the midfield retreat to just in front of the defence, Wolves invited to dominate, create their chances, score the goals.

Looking at the bare statistics it might not look it BUT Wolves were by far the better team. Apart from Allan Saint-Maximin no attacking plan whatsoever, as usual.

ASM playing centre-forward but having to come deep to try and get the ball after getting sick of pointless high balls knocked up, who was going to be getting in the box in the absence of ASM as he foraged ever deeper?

I couldn’t get to Molineux today and so I had to watch on a stream…lucky I didn’t drown myself watching that.

Wolves are now added  to Villa, Watford , Southampton, Burnley, West Ham and Leeds, all are poor to average teams and Newcastle unable to beat any of them. Indeed, whilst Steve Bruce built up his mates at Man Utd to be some kind of impossible opposition to get anything from, the reality is that this season they haven’t been very good, defeats to Villa, Young Boys and West Ham, unable to beat Southampton and Everton, very luck wins against Villarreal and Wolves. Newcastle United have not played anybody yet. 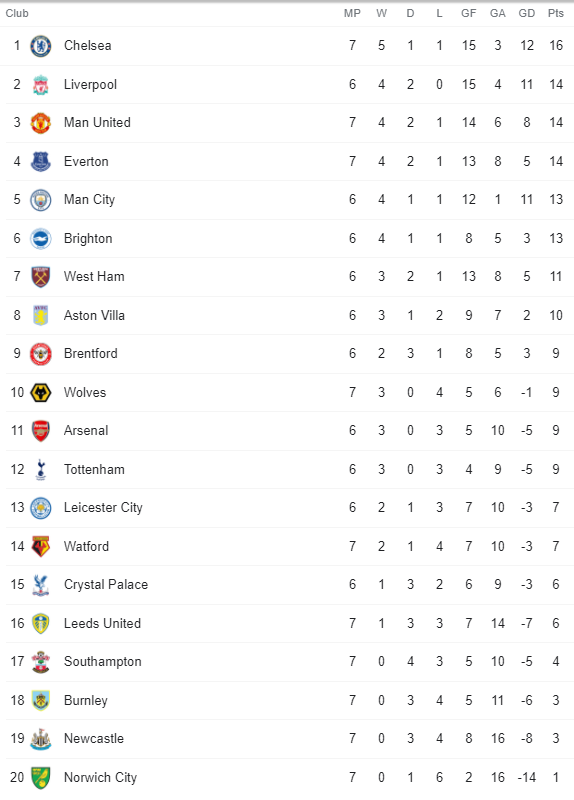 As you can see, Newcastle United entering the October international break deep in relegation trouble.

You look at that top six and NUFC have only played Man Utd.

As usual, the only positives were elsewhere, Southampton unlucky to lose at Chelsea late on after equalising, Burnley only managing a 0-0 draw against Norwich. Whilst if you have an interest in the lower leagues, Sunderland got smashed 4-0 at Portsmouth.

Steve Bruce will no doubt tell us how unlucky Newcastle were today, if only ASM had taken that one chance we had other than the goal. Dust ourselves down and get prepared to lose at home to Tottenham in two weeks time.

The thing is, when pundits and journalists and Bruce’s other mates ask what exactly is our problem it is that Steve Bruce shouldn’t have this squad in the relegation zone and no decent manager would.

We look at not just this joke seven weeks start to the season and no wins in eight games. Instead, we are now looking at only seven wins in thirty seven games these past ten months.

This is the match schedule up to the end of November 2021:

Honestly, when you look at all the poor to average teams that Steve Bruce has failed to beat this season, where exactly do you see him getting any wins…?

He has to go now and if Steve Bruce isn’t willing to retain some dignity and resign and walk away without his massive pay-off, Mike Ashley has to sack him.

Steve Bruce has to go immediately and bring in whoever is the best available, Eddie Howe?

If they wait until the following international break (November) then every chance we will still have only three points BUT eleven PL games gone.

Leave it until we get to December and quite possibly still three points BUT thirteen games, over a third of the season, gone.

Last season, Steve Bruce was lucky enough to see three such poor teams that 29 points kept everybody else up.

Even 29 points looks ridiculously far away now under Steve Bruce and if there are going to be three hopeless cases once again this season, then Newcastle could well be one of them unless Bruce is removed ASAP.