There are some helpful stats now available after this latest weekend saw the first seven rounds of Premier League games concluded.

Steve Bruce has regularly insisted that he is seeing loads of positives this season with Newcastle United, the Head Coach claims definite signs of progress.

Newcastle fans overwhelmingly not seeing their black and white world through the type of rose-tinted specs that Brucey owns.

This is how the Premier League table looks now as we are into the October international fortnight: 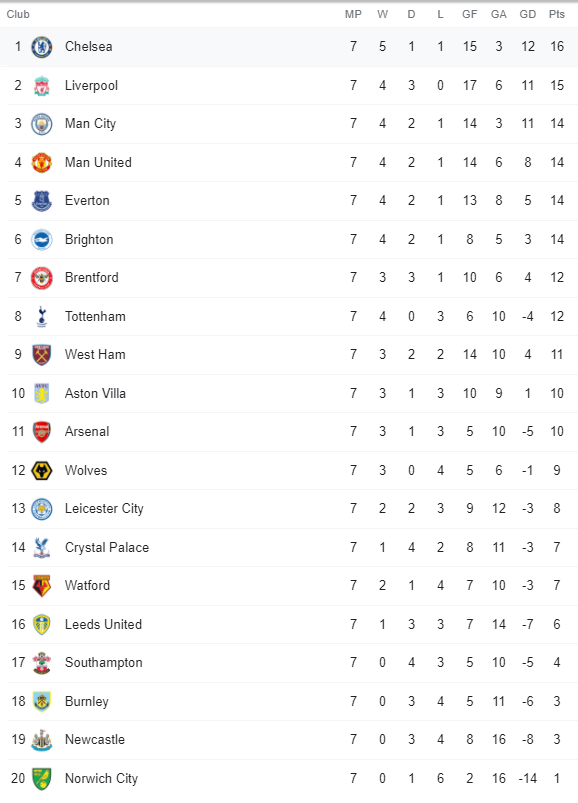 However, is there any other way of measuring how well, or not, Newcastle United are doing so far. A more subtle / refined way to judge the season as we head into it match by match?

Following the Wolves match (and the other nine Premier League games played this weekend), this Premier League Baseline Tracker table has been published by ‘The Other 14’ (who specialise on stats/tables etc on the 14 clubs who aren’t the ‘Big Six’).

They explain how the Premier League Baseline Tracker works:

‘The points system for the Baseline Tracker Table is based on the fact that the 13 home games against the rest of the other 14, are the most likely for scoring points. These 13 games give a baseline par score of 39 points.

The result is a table which is a more realistic view of how each of the other14 clubs are doing at any stage through the season.’ 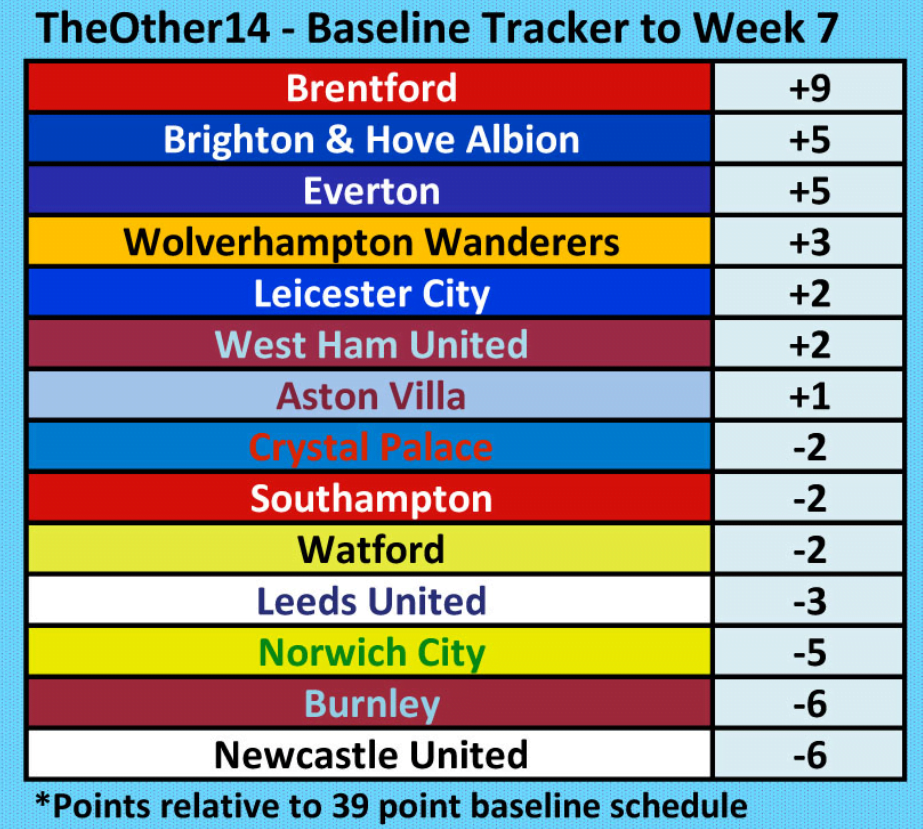 As you can see, Newcastle United are rock bottom when it comes to how they are doing this season, using the baseline tracker system, even worse than Norwich City who are bottom of the real table.

Whilst Steve Bruce has waffled on about how great but unlucky Newcastle have been this season, supporters have been pointing out that not only have performances and results been terrible, but also NUFC have had such a soft set of fixtures to start the season.

Newcastle have only played Man Utd of the big six, whilst Norwich have faced Liverpool, Man City and Arsenal, plus the Canaries have also faced Leicester who finished fifth last season and Everton who are currently fifth.

The Newcastle United -6 rating above, comes from taking the four home games against other14 teams, a defeat by West Ham and, draws against Southampton, Leeds, so two points instead of nine leading to a -7 rating. Then from the away games against other14 clubs, only the one point from nine, that draw against Watford but defeats to Wolves and Villa taking it from -7 to -6. Plus of course no bonus point(s) from the 4-1 defeat at Man Utd.

When you look at the full Premier League table, Newcastle have only played one of the top eight and that was Man Utd, who haven’t exactly looked great in most of their other matches.

In contrast, four of the next five Newcastle games are against clubs currently in that top eight.

Maybe an even more helpful and simplistic insight into how desperate things have been, is if you look at where Newcastle United picked up their points last season, against which clubs.

Moving forward to the 2021/22 season, it is of course averaging 0 points against big six clubs, with that defeat at Man Utd.

However, very worrying in that six games against non-big clubs have produced only three points from a possible eighteen, an average of only 0.5 points per match. Already almost a quarter (6 of 26) of games gone against the non-big six.

Realistically, Newcastle United are going to get very few points against those big six clubs, so that now puts massive pressure on those remaining 20 matches still to be played against other14 clubs.