Miguel Almiron and his Paraguay teammates started off the October internationals with a great result in the early hours of last Friday (UK time), drawing 0-0 with Lionel Messi’s Argentina in their South America qualifying group game for the Qatar World Cup in 2022.

In reality anything from the Argentina match was always going to be a bonus and Paraguay thus having a great chance to set themselves up for the final run of half a dozen qualifiers that will follow after October. As they then had to play third bottom of the table Chile and then second bottom Bolivia, before Miguel Almiron would head back to Tyneside for Sunday’s match against Tottenham.

That result against Argentina left the South America qualifying group for Qatar 2022 looking like this last Friday (8 October) afternoon: 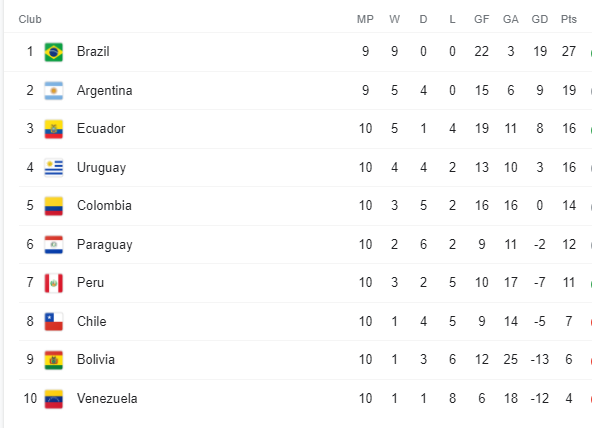 The top four qualify automatically for Qatar whilst the fifth goes into a play-off. As you can see, Paraguay were in sixth and out of the qualifying spots, but with a massive chance with their other two October games to put themselves into a powerful position.

However, in the early hours of Monday morning (UK times), Miguel Almiron and Paraguay lost 2-0 to eighth place Chile,  losing the game to two second half goals from the hosts.

Late last (Thursday) night Paraguay had the chance to still put themselves back into the mix BUT in La Paz they really came unstuck.

Bolivia taking the lead on 21 minutes and then 2-0 on 53 minutes, Miguel Almiron starting the game but subbed after 69 minutes (tactical substitution). Two late goals making the final scoreline a humiliating 4-0 hammering.

That now leaves the qualifying table looking like this on Friday morning: 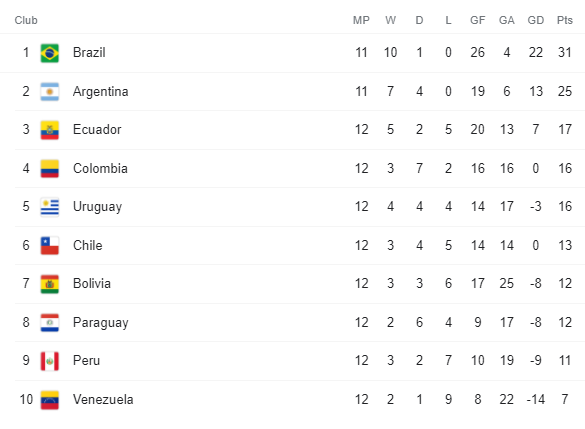 With more difficult fixtures to come, very difficult to now see Paraguay having a realistic chance of qualifying.

What might have been though, as two wins these past few days would have seen Paraguay on 18 points and fourth in the table.

For Newcastle fans, the attention will all be on whether Miguel Almiron arrives back in good time to face Tottenham on Sunday, as a new era blows into Toon. Almiron finisheed his game at around 11pm in La Paz on Thursday night, so now begins his lengthy journey back to Tyneside sometime on Friday.