I forced myself to sit through Match of The Day despite the latest Newcastle United shambles and I’m glad I did now.

I actually took a lot out of watching the other matches that were featured from Saturday’s action, how the various managers set up their teams, how they reacted during games to try and improve their chances of winning or at least getting something out of their games.

Then we had Newcastle United and Steve Bruce.

Gary Lineker and Ian Wright were right on the money talking about the problems at Newcastle United and where the biggest problem of all (excluding Mike Ashley) is.

However, there always has to be one, which on this occasion was Danny Murphy.

No surprises there, as Murphy has repeatedly stuck up for his mate Steve Bruce and is one of those pundits who always loves to wind up Newcastle fans.

Amongst what he has said in support of Steve Bruce, Danny Murphy had this to say back in November 2019:

“What he [Steve Bruce] has done, is with the players he has got, he has found a way of winning games.

“He has worked damn hard at set-plays, you can see that.

“He has made some very, very cute tactical changes in various games which I have seen.

“Steve Bruce is not scared to make big decisions.”

Well Danny, the big decision Steve Bruce is refusing to make is to resign, to leave Newcastle United with at least some minute shred of dignity.

“Thank heavens Alan Shearer wasn’t around today, he would have been very loud.

“But they are winless now…and that is four of the last seven [Premier League] campaigns they have started it without winning a match in their opening seven fixtures.”

“Three points from a possible twenty one.

“You know something, you look at Newcastle, unfortunately, you don’t know where their next point is coming from.

“He [Steve Bruce] hasn’t changed it from Watford. He is playing Allan Saint-Maximin down the centre.

“They just look…I don’t know…the [lack of] cohesion, I don’t know what is going on there?”

“I don’t think it is all that bad.

“I know they haven’t won but they have scored more goals than anyone else in the bottom half this season.

“The balance isn’t right…last season right, I think this would have been the other way around, or the last couple of seasons – hard to beat but able to score many goals.

“Steve Bruce has definitely tried to play more on the front foot at the beginning of this season but they are suffering defensively because of it.

“And that is football, finding that balance between being entertaining, looking like a team having a go, but leaving yourself wide open.”

“But is that not the manager’s job, to find the right balance?”

“Of course it is, which he hasn’t done so far.

“What you can’t argue with is the goals they have scored and the chances created, they should have won comfortably at Watford last week.”

“But Dan, it comes to the point where you say that they should have won but they didn’t.

“I don’t think Allan Saint-Maximin playing down the centre is good. Play him out there [wide], let him create, get somebody else in the middle.”

“One of the other problems is [Callum] Wilson, he is a terrific player but he doesn’t stay fit enough.

“If he was playing in that side, I think they would be in a better position, they have got to get him fit.”

This is the up to date Premier League table on Sunday morning: 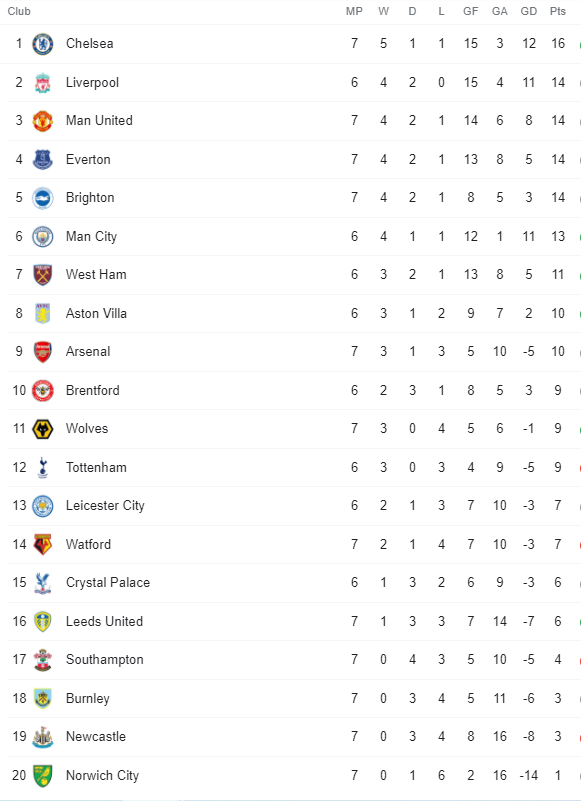 As you can see, Danny Murphy is right, in that Newcastle have scored more goals than any other team in the bottom half.

However, that is just a bit of an anomaly this season, far less goals scored by teams in the bottom half than usual, whilst they have been conceding less generally as well.

Last season after seven games, five clubs in the bottom half had scored 10 or more goals and that included Newcastle United! Steve Bruce’s team had actually scored two more goals (ten) than they have done in the same amount of matches this time. So it is even a fallacy when Murphy is claiming Newcastle are doing better attacking wise when it comes to goals.

Last season, Newcastle had conceded 11 goals after seven matches, they had the seventh worst record in the bottom half at that point, whereas now Newcastle are the very worst with 16 goals conceded this season after seven.

Reality is that things have got worse at both ends of the pitch under Steve Bruce compared to last season.

Danny Murphy talks about the problem just being about finding the right balance BUT it is not.

In all competitions this season Newcastle have scored eight goals in eight games, that is exactly one goal a game, which is rubbish.

Whereas at the back it isn’t rubbish, it is far worse than that, it is a disaster that has got progressively worse in these 27 months of Steve Bruce.

Bruce inherited a disciplined defence that under Rafa Benitez had conceded 47 and 48 goals in his two NUFC PL seasons, under Steve Bruce that has become 58 conceded in 2019/20 and 62 in 2020/21, with 16 already conceded in seven, Newcastle are on course currently to concede 87 in the PL this time, whilst the current average would mean 43 goals scored.

Unless something radically changes with what is currently happening, Newcastle United are going to be relegated.

If Steve Bruce doesn’t go, Newcastle United are going to be relegated.