Bat and eye of newt – David Batty – A Defence

Before electricity was first used in the UK, the rare occasions where bats became visible to people was around bonfires, harvest fires plentiful at this time of year. So it is said began the creature’s strong association with Halloween.

Like almost everyone else, I was surprised to learn of our attempts to sign David Batty mid-season, from then champions Blackburn in 1996.

Top of the league, with our only title rivals Manchester United still often unimpressive, albeit often fortuitous also, there didn’t seem the necessity.

Furthermore, David Batty did not strike anyone as the sort of player a Kevin Keegan Newcastle would be interested in. A defensive midfielder, far more associated with being a ruffian than for contributions going forward, even though an international and a success at club level, this had been in teams not renowned as footballing sides, Leeds, Blackburn and a post Sir Bobby England

True, the last time I’d seen him play he was dominant and scored a cracker against Manchester City and before that in the Champions League he was about to chin team-mate Graeme Le Saux – both highly commendable acts – and we had very limited first hand exposure through transfers and injuries, his reputation went before him.

I was wrong. We were wrong. Even The Mag was wrong, well one contributor….

From issue number 88 of The Mag in a piece titled ‘Its A Conspiracy’:

The match report of his debut said of Batty: “I had no doubts that he would be good defensively but I have to hold my hands up and admit I was amazed at how good he was in a positive sense. His passing and running off the ball were excellent.”

Keegan would later say that it wasn’t until he worked with David Batty on the training ground day-to-day that he realised how good he was.

Bats have gotten a bad name in recent years. I read comments on these pages recently to that end, in which it was agreed that Batty had also:

2) was nowhere near as good as Lee Clark and

It is about opinions, but this felt to me like the sort of myth that led myself and others to believe Batty wasn’t good before we signed him, was beginning to resurface. In and maybe because of hindsight,

Like Batty seeing an opponent with the ball, time and space seemingly under control in the midfield, I couldn’t let it go unchallenged.

This was the first time I’d heard of the concept that Batty’s arrival was responsible for us losing our 12 point lead and ultimately the title.

At the time it was generally accepted that Keith Gillespie’s injury at Old Trafford over Christmas had caused an imbalance. In the post-mortem it was considered and became mythological fact to outsiders that it had been the inclusion of Faustino Asprilla to blame for loss of form, points, lead and ultimately title. I’ve always had compulsion to defend Tino who was one of our better performers at that time from the allegation but have sympathy for the case. His individual performances were no problem, though that is never specified in the argument against. However, the nature of player he was, made it feasible. 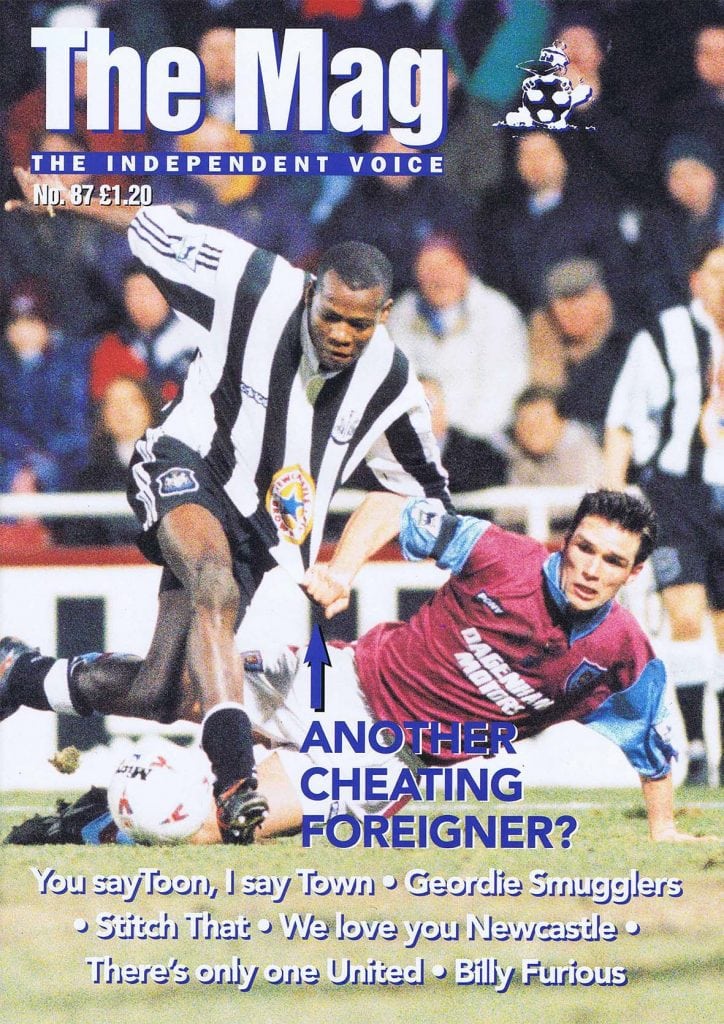 I could cite winning the game at Boro for us, a goal and a brilliant assist at Man City, a genius finish and brilliant assist at Liverpool, a brilliant assist against Spurs, a man of the match performance in an bamboozling 41 shot demolition of West Ham with two of the most sublime assists you’ll ever see – was decent going for a flop in the space of 3 months – but cannot extricate Tino’s presence as entirely blameless.

David Batty added balance. The afternoon of the day Keegan met with Batty saw a sloppyish performance at relegation threatened Man City. Clark chose the inopportune moment to have his worst game of the season, maybe in a black and white shirt, in the would-be Batty role, was run ragged by Kinkladze. 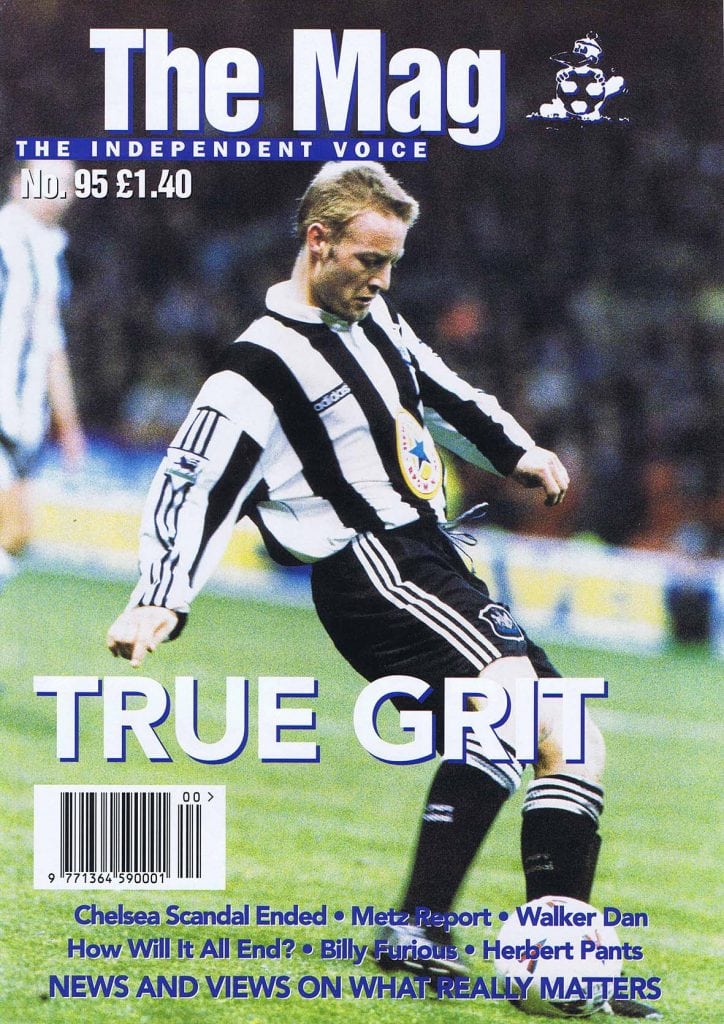 His debut was at home to Manchester United, a game we dominated and he excelled in, at the end of which the gap was a single point.

The player least responsible for the diminished lead was David Batty.

The horrible reality may be a dip in performance from the players that got us there was responsible. Les’ goals ratio dropped, Ginola’s performances dropped (albeit from arguably best player in the world levels) as did Beardsley’s and Lee’s.

It was almost legend that the first foot he put wrong (literally I hadn’t recalled a single ball given away or tackle flinched to that point) was a slight mis-control at Forest which led to Ian Woan scoring a spectacular long range goal.

The accusation beyond reasonable debate is the summation that he basically wasn’t a good player:

David Batty with 42 England caps, including in World Cups, European Championships and qualifiers under three different managers. Including man of the match showings.

Finished runner up at two different clubs on three occasions. Third and fourth.

Played in the Champions League for three different clubs on four different occasions.

Apart from as a youth, never played outside the top flight and always at teams competing for trophies.

Was a perennial first choice pick wherever he was and in the best team we’ll possibly ever see (player of the month at times).

The other reasons for this estimation of Batty are arguable, personal preferences. He was a defensive midfielder (what a b.stard) before that position was made trendy by Didier Deschamps (of ‘water carrier’ fame) and Claude Makelele a few years later.

Another, whilst somewhat the same point, his is displacing in the side of Lee Clark. I loved Clark. Kelly apart he was my favourite player in the pre-premier league days so am uncomfortable even comparing players so fondly remembered and assumed it never had to be said.

Though I will say this. Not to do with Batty / Clark but just because it always amuses me. The night before we (and Batty) beat Barcelona in the Champions League, the mackems (and Clark) were playing in a half-empty stadium in a league-cup preliminary round against Bury.

Clark’s longest run in the team and undoubted best form in the Premier League came as a holding midfielder at the start of the 95/96 season. Giving it simple. Biting at their players. Linking play, pass and go. Not as an attacking player for in that role Rob Lee was the best player in the country at times. In the season in question Clark had scored twice in 27 games and 7 sub appearance, whilst Batty contributed 1 in 11 and would equal Clark’s two in his 13th start with that fantastic goal against Wimbledon.

For each side of the argument it should be remembered that they weren’t the same sort of footballer despite occupying the same position. The same can be said of Barry Venison who excelled so much in that role in 94/95 that he was selected for England and was arguably our player of the season.

Receiving one of those tremendous St James Park ovations when entering the fray as a substitute in a close, tense game with Leeds over Christmas 2000/01. David Batty would retire in the summer of 2004 after, as fate would have it, an injury picked up in the match between ourselves at Leeds at SJP that January.

I just think one of the best players in the best Newcastle team, under the best manager I’ve / we’ve ever seen deserves as robust, combative, thorough and hopefully as efficacious a defence of his legacy as he gave us and ours over those years.