The Premier League table is obviously always usually the first place to start, when analysing what has been the case so far in any season.

As Steve Bruce always used to remind us, it is all about the accumulation of points, or not, as the case may be.

Looking at the updated Premier League table (see below) tells us a lot, certainly more than just the basic statistics.

This is how the Premier League table looks on Sunday morning (24 October 2021) after Newcastle’s draw at Crystal Palace: 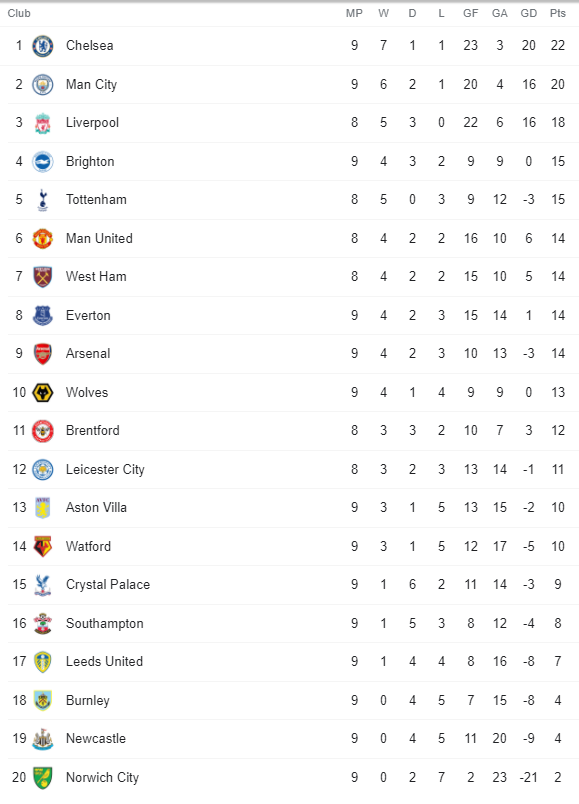 The four (more) ‘positive’ results so far this season have been against the four clubs (that NUFC have played) who are very lowest in the Premier League table. Indeed, the four clubs immediately above the relegation zone in 17th, 16th, 15th and 14th, Newcastle drawing against all four to pick up their only four points of the season so far. NUFC conceding only five goals in the four PL draws.

When you compare that to the matches they have played against the five clubs higher up the Premier League table (5th, 6th, 7th, 10th, 13th) it is a vastly different story. Not only losing all five but also conceding a massive 15 goals, averaging three per match.

Listed below are the 11 remaining games of 2021, the ones that still have to be played before any new signings can be potentially added. Nine of those eleven matches are against clubs currently in the top twelve, including all of the top four.

A reminder yet again of how Steve Bruce has burnt through a series of fixtures already, where Newcastle could and should have expected to pick up significantly more points. Even the League Cup match saw Bruce present third bottom Burnley with their only win against a Premier League team (in ten attempts) this season.

Graeme Jones and / or whoever comes in as a permanent appointment have been left with a tough looking quartet of matches up next, with Chelsea home, Brighton away, Brentford home and Arsenal away.

I don’t know about you, but my eyes can’t help drifting down to the following two matches and think these are going to be absolutely massive in the short-term for the club and its new owners. Consecutive home games against Norwich (30 November) and then four days later Burnley (4 December). As things stand, you have to be thinking absolutely essential six points.

I think we can expect / hope that from this point on, this same group of  NUFC players can show some improvement as a team, ahead of new recruits arriving. However, at the same time you have to be realistic and accept that the five matches that then follow in December are absolutely horrendous – Leicester away, Liverpool away, Man City home, Man Utd home and Everton away.

A reminder as well, that once we get into January, there is Southampton away on the 2nd January and so only 17 PL games remain after that when any new signings could come into play.

Putting a positive but realistic look on these remaining 2021 matches, I am looking for four points out of the next four matches (Chelsea home, Brighton away, Brentford home, Arsenal away) and then wins against Norwich and Burnley.

That would give Newcastle 14 points from 15 Premier League games and then anything from that daunting final five match run in December is a bonus.

The fans need to play their part and the swiftly sold out full house for Chelsea is where it has to start, the game where we are free of all the negativity of Mike Ashley and / or Steve Bruce for the first time in some fourteen and a half years.

Chelsea are flying at the top of the table and having scored 23 goals (including seven yesterday against Norwich) and only conceding three in nine Premier League games so far, the challenge is stark. However, Chelsea have traditionally not fancied it up here and whilst they have won two (and lost one) of their last three visits, their (Chelsea’s) record over the past eight Premier League matches at St James Park is won two, drawn one, lost five.

It was a gutsy point that Graeme Jones oversaw at Palace to stop the rot, another point against Chelsea would be a massive bonus.

At least one thing hopefully, whether under Jones or a new manager, Newcastle United shouldn’t be feeling they are beat already before the final whistle, as felt increasingly the case under Steve Bruce.