You have to love Steve Bruce…

Well, love him in terms of ‘respect’ for the fact that he never stops trying.

Never stops trying to put a positive spin on things.

Steve Bruce talking to NUFC TV in the aftermath of Newcastle 1 Leeds 1:

“Next stop Watford away, obviously still searching for that first win of the season, but is this something to build on going into that?”

“We were ten seconds away at [against] Southampton.

“And if we had took them two [extra] points we would be sitting on five or six, in mid-table, thinking ‘not a bad start’.

“We’ve got to still work at it.

“A long way to go and…but the Premier League is unforgiving, as we know.

“But lets look forward to the challenge of what is coming up next.”

This is the story of Steve Bruce and his time at Newcastle United so far, a very long 26 months we have endured. If Newcastle have even just one chance in a match and lose by a few goals, we have still seen claiming that if only that (one!) NUFC chance had gone in…

Against Southampton, the truth of the match was that the Saints came to St James Park and dominated the match, with 64% possession to Newcastle’s 36% and 22 shots for the away side to the home team’s 10.

Southampton deserved to have won the match by half-time as they wasted chance after chance and Freddie Woodman denied them as well. Djenepo somehow missing an open goal from four yards out summed up the kind of opportunities they had and why they should have scored a few goals and had the match won.

The game did end up with a late flurry of goals and Southampton scored in the final minute of injury time BUT Newcastle themselves had only taken a 2-1 lead on 90 minutes. The way Steve Bruce talks, you would think Newcastle had cruised this game and totally deserved to win, yet the very opposite was the case, no matter what time they scored their equaliser, it would have been a travesty if Southampton had lost that match. In plenty of matches these past couple of years, Newcastle have scored late goals and got points on many occasions they didn’t deserve, yet I can’t remember many (any?) occasions when afterwards Steve Bruce would come out and say how lucky NUFC had been to score a late goal.

Really though, you have to seriously look at this line from Steve Bruce.

If anything was ever in need of fact checking, it is this…

“And if we had took them two [extra] points we would be sitting on five or six, in mid-table, thinking ‘not a bad start’.”

Hmmm, just to remind you, this is how the Premier League actually looks on this Monday morning, with everybody having played five games: 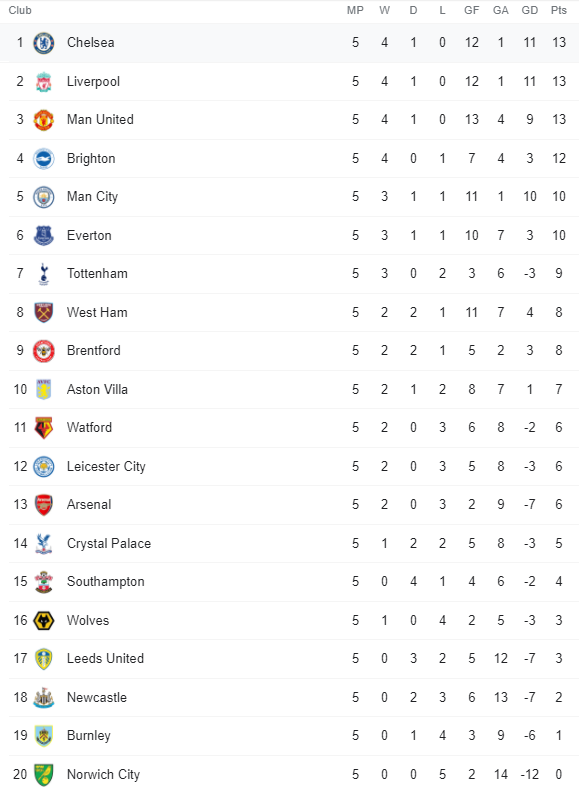 As you can see, Newcastle are in eighteenth place on two points, if they had held on against Southampton and won 2-1, Steve Bruce and NUFC would be on four points and in fifteenth place.

NOT ‘sitting on five or six, in mid-table’, pure fantasy!

As for thinking ‘not a bad start’, if it had been a win against Southampton, it would mean a not bad start to the season of four defeats, one draw and one win, already out of the League Cup, with four from a possible fifteen points in the Premier League and one point above the relegation zone.

Obviously four points would be better than two but considering the relatively kind early fixture list and the fact Newcastle have played four of the six games at home, you would have to be pretty deluded to be going around telling everybody that this has been alright so far.

The big worry for me is that this is how Steve Bruce is behind the scenes as well, telling the Newcastle players that it is simply a case of having been so unlucky. If only Southampton hadn’t scored, if only the referee had blown for full-time at half-time against West Ham, if only the Burnley keeper hadn’t made that save in the cup match, if only had taken that chance to make it 2-1 at Old Trafford…

Every manager could go down this route, every game you can find an angle to claim if only this had happened…but that is not reality, Newcastle have lost four and got two draws from these six matches because that is the most we have deserved, when actually luck has gone our way to get a point against Leeds and Southampton, with both of them dominating the play and having more and better chances to win the two matches.

Steve Bruce has to find a way to get the team playing better, not relying on luck to help dig him / them out.

The excuses he comes out with are unbelievable and last season we saw him quoting stats of runs of games and how many wins / losses that bore no relation to reality, whilst this season we have already had classics such as keep referring to the Burnley cup defeat as ‘a game that we didn’t lose on the night’, sorry Steve, we did lose that game (and others), a bit of a clue that Burnley not Newcastle are playing Rochdale tomorrow (Tuesday) night for a place in the fourth round.

Steve Bruce needs to face reality and if he doesn’t, you have to really worry as to whether Newcastle can climb out of this latest mess that Mike Ashley and his loyal servant have landed us in.

(Match Report – For one Friday night only, it was great being at a Newcastle United home match again Read HERE)

Alex Bruce gives a new ‘unbiased’ opinion on the Steve Bruce situation ahead of game 1,000