An interesting new report from the CIES Football Observatory has presented predictions for final tables for all five major European leagues, including a 2021/22 final table for Premier League clubs.

As well as the English top tier, the report also covering Germany, Spain, France and Italy.

Only five games into the season but their feedback on the Premier League clubs is particularly interesting.

CIES Football Observatory report that they have compiled the final tables using the following methodology:

‘The statistical model used for this purpose includes the players’ experience, transfer fee investments to assemble squads, as well as each team’s performance in the last 365 days.’

This is how the final 2021/22 table looks for Premier League clubs using the CIES Football Observatory statistical model: 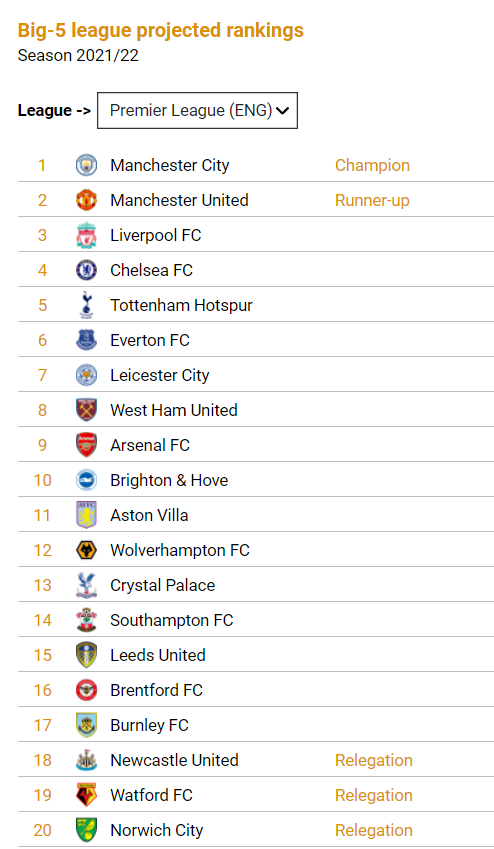 This is how the report described the likely situation for Premier League clubs:

In England, the top four would be the same as last season, with Tottenham fifth ahead of Everton. Norwich City, Watford and Newcastle United are the main candidates for relegation.

Whilst on the continental leagues CIES Football Observatory comment:

‘With respect to 2020/21, the only change from a champions perspective is supposed to take place in Spain, with Real Madrid finishing ahead of Atlético and Barcelona.

In Italy, Inter Milan would outrank Napoli and city rivals Milan AC, with Juventus only sixth. Wolfsburg are the most likely runners-up in the German Bundesliga, ahead of Borussia Dortmund and Bayer Leverkusen. In France, after Paris St-Germain, we would find the two Olympique (Marseille and Lyon in this order), while St-Etienne is a serious candidate for relegation.’