Interesting to see the impact on the Premier League relegation odds after Saturday’s hammering for Newcastle United.

The bookies reacting as the fourth round of fixtures have been played out, with two games still to come.

Newcastle United picking up only one point from four games so far, plus of course exiting at the first opportunity from the League Cup – losing at home to a relegation rival.

Some quite significant moves already after these eight results so far this weekend:

These are now the Premier League relegation odds for the likely candidates from Betfair, in brackets are the odds that were generally available before a ball was kicked this season:

The most significant move is Newcastle United (1/1) now finding themselves one of the three favourites to go down, having started the season 3/1 sixth favourites.

After that hammering from Man Utd and Ronaldo, the bookies see things looking bleak for Steve Bruce and his players.

As you can see from this updated Premier League table on Sunday afternoon, only one club below Newcastle United: 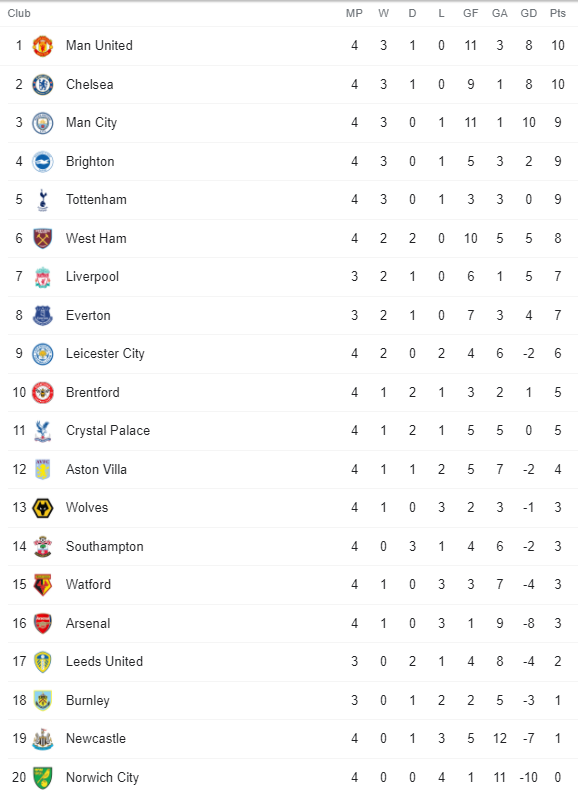 Needless to say, points are needed quickly to steady nerves at Newcastle United and the news on Friday on Callum Wilson that Steve Bruce has no idea when he will be available, hardly helps. The position the same with Martin Dubravka and Jonjo Shelvey, with Ryan Fraser and Paul Dummett also having been unavailable for yesterday’s defeat at Old Trafford.

Following the loss to Man Utd, Steve Bruce then revealed that there are now three more injury worries, with Ciaran Clark, Joe Willock and Javier Manquillo all subbed due to injury problems. The NUFC Head Coach saying it would be a case of waiting to see whether these are just knocks or more players to be ruled out of matches.

If Burnley were to get anything at Everton on Monday night then that wouldn’t be great news, as already I’m looking at Sean Dyche’s team, Watford and Norwich as our best hopes of survival.

A victory or two could swiftly improve the mood BUT difficult to see many wins coming our way whilst averaging three goals in the NUFC every match. Newcastle United (12) and Norwich (11) are the only two Premier League clubs to already reach double figures on goals conceded.

Newcastle now having to face Leeds on Friday night who scored seven against NUFC in three hours of football last season, then what looks already to be a massive relegation six pointer away at Watford in 13 days time.

Georginio Wijnaldum explains why he chose Newcastle United over PSG