Andrea Radrizzani has came out and spoke to Sky Sports.

The Leeds United owner and Chairman talking to the broadcaster after his team are still without a win after four matches and currently have only the two points.

This is in contrast to last season when after promotion, Leeds picked up seven points in their opening four matches, including two wins and an excellent draw against Man City.

Amazingly, to Newcastle United fans anyway, the Leeds owner and Chairman hasn’t gone public to have a go at and undermine the manager and the club’s fans, or for any other daft PR / internal club politics reasons.

Bizarrely, Andrea Radrizzani hasn’t chosen either to communicate via an unsigned statement released anonymously to the media and fans.

Astonishingly, the Leeds top man has instead simply spoken to Sky Sports to steady things at the club after a less than brilliant start, taking responsibility, lifting some weight off the shoulders of his manager as much as possible.

Quite remarkable, clearly Andrea Radrizzani hasn’t a clue how to run a football club?

Maybe Mike Ashley could hire Lee Charnley out to advise these clueless Premier League clubs on how to do things properly, maybe generate enough cash to make a loan signing in January…?

The truth is, that Leeds may not have quite hit the heights they hit regularly last season, but they have had a tough start.

Defeats away at Manchester United and home to Liverpool, whilst draws home to Everton and away at Burnley.

As you can see from this Premier League table on Tuesday morning, three of their opponents so far are currently top four, Leeds the only team not to lose to Everton so far as Rafa’s side have won their other three. 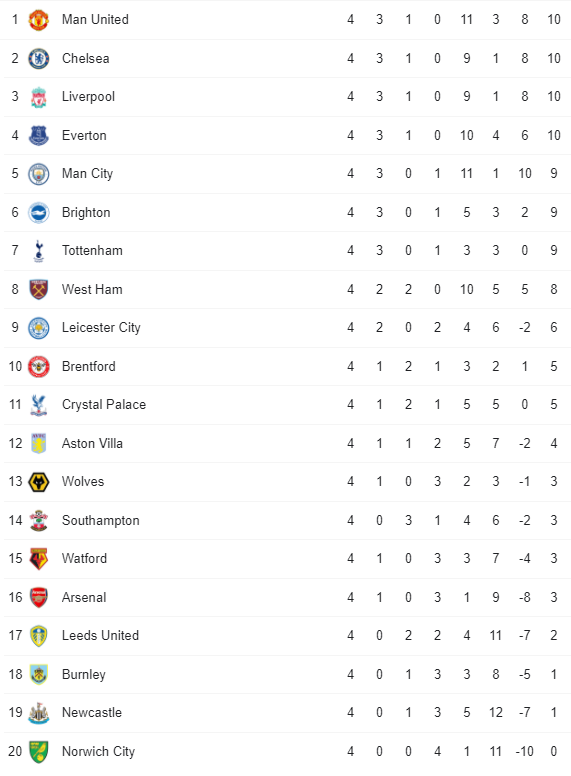 Last season, two of the first four Leeds matches saw them beat Fulham and Sheffield United who went on to be relegated by some distance.

Early fixtures have been far more difficult this time but now they face relegation favourites (along with Norwich and Watford) Newcastle United on Friday and Andrea Radrizzani is hoping this can be the launch pad to properly start the season.

It was two wins last season for Leeds against Newcastle and seven goals scored by the Yorkshire club across the two matches.

Whilst Leeds communicate intelligently and respectfully with media and fans these days, Newcastle supporters can only wait and see what insults Steve Bruce will serve up to media and / or fans ahead of Friday’s match.

Meanwhile Lee Charnley is still hiding in his St James Park bunker and Mike Ashley’s only contribution so far this season has been that ridiculous statement having a go at fans and Brucey.

What a time to be alive.

“We hope to make points next time [against Newcastle United], we can get better.

“I am sure we will, I’m confident.

“We have had a tough start, two very strong sides here at Elland Road, Everton and Liverpool.

“I am still positive [though] that we can start our season again on Friday at Newcastle.

“The difficult calendar at the beginning of this season is not giving us many options [to pick up points].

“We have only two points but we have plenty of time to get back to where we were last year.

“We invested a lot in players last year and this season and I think the club is going in the right direction to establish itself in the Premier League.”