What do you think has been the biggest Newcastle United problem this season?

No need to all shout out ‘Steve Bruce’!!!

Instead, I was meaning the actual nuts and bolts of what has happened on the pitch, which things / areas of the team that are working well, but most importantly, the ones that aren’t working well.

There are some helpful stats now available after the weekend saw the first six rounds of Premier League games concluded.

Following the Watford match, a table has been published by ‘The Other 14’ (who specialise on stats/tables etc on the 14 clubs who aren’t the ‘Big Six’) which shows Premier League players at  the 14 clubs who have created the most chances in open play, in the opening six rounds of PL matches: 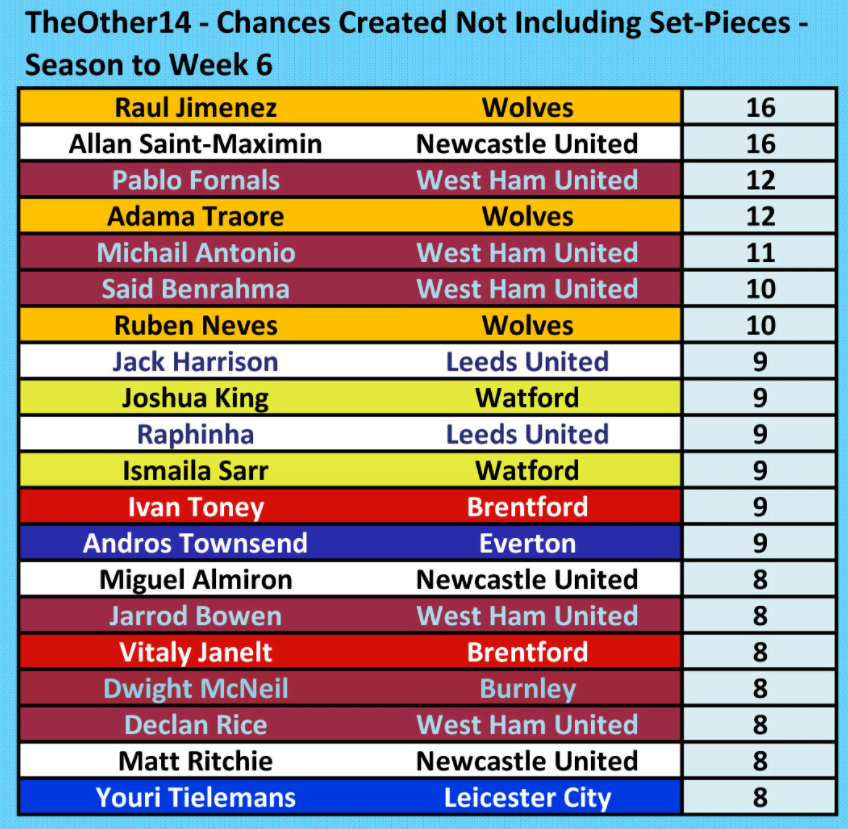 As you can see, Newcastle United are one of only three PL clubs (amongst the other 14) to have three or more players in the list of top creators of chances.

ASM (16) Almiron (8) and Ritchie (8) having created an impressive 32 chances between them in six games, an average of over five each match between just the three of them.

West Ham with five players making the list who have created 49 chances between them, pointing to why they have made such a good start to the season, currently in seventh, just three points off the top of the Premier League. With so many chances created, West Ham have scored 13 goals, only top of the table Liverpool scoring more goals (15).

In contrast, whilst the likes of ASM, Almiron and Ritchie have created so many chances, Newcastle United have scored just seven goals and are fourth bottom of the table without a single win, only out of the relegation zone on goal difference.

Newcastle United creating relatively plenty chances BUT the biggest problem that is potentially getting shown up, is the lack of players capable of converting the chances into goals. Certainly in the absence of Callum Wilson, the likes of Joelinton (six goals in 75 PL appearances, including zero in six this season) and others failing miserably. Many fans questioning why in the absence of Wilson, does Dwight Gayle – Newcastle’s only other striker, get more of a chance in the team than the seven minutes of PL football he’s so far been allowed this season.

I now want you to look at another set of stats, so maybe I should have titled this article biggest Newcastle United problems (not problem!).

As you can see, the number of efforts on target you allow the opposition, generally has a massive effect on how many goals you concede. Which is basic common sense. However, it also maybe is THE biggest issue in dictating your results, when we look at what has happened so far.

These three clubs also the ones to concede the most goals in the Premier League AND they make up three of the bottom four currently.

As has been much mentioned, the Newcastle United defending as a team has completely disintegrated under Steve Bruce. Rafa Benitez’ Newcastle team conceding just 47 and 48 goals in his two PL seasons, whilst under Bruce it has been 58 and 62 goals.

In the last two relegation seasons, Newcastle conceded 58 goals in 2008/09 and 65 in 2015/16. The past two seasons show we are very much in that territory under Steve Bruce, when it comes to relegation bringing number of goals conceded. With 14 already conceded in six PL games, if averaged over a full season that would mean a final total of 88 goals conceded this season. Clearly this has to be improved substantially, a bit of a worry when Newcastle are still yet to play most of the better teams, including the likes of Liverpool, Man City and Chelsea.

As an aside, interesting to see the Man City stats above. Their defence was seen as the biggest weakness in past years but in six PL games they have only allowed the opposition six efforts on target, with only one goal conceded.