Matt Ritchie has been a major talking point this season.

The winger turned wing-back has long been expected to leave Newcastle United, with family reasons usually cited as the reason for allegedly wanting to move back down to the south coast, or at least nearer to it than the north east.

However, having turned 32 earlier this month and contracted to the club until 30 June 2023, it appears now that he is far more likely to see out a seven years (or more…) stay, having first arrived in summer 2016.

Not only is Matt Ritchie still at St James Park but he has established himself once again as a first choice player.

Last season he ended up only starting 15 Premier League matches and indeed was named on the bench for the same number of games.

Steve Bruce ended up though bringing Matt Ritchie back into the team from April onwards last season and that has continued into the new season, starting all of the first four PL games.

Meanwhile, after spending £15m on Jamal Lewis, Bruce has totally sidelined him from his NUFC Premier League starting elevens, not since February has  the former Norwich player started a PL match.

A conundrum though presents itself now on Matt Ritchie…

A table has been published by ‘The Other 14’ (who specialise on stats/tables etc on the 14 clubs who aren’t the ‘Big Six’) which shows Premier League players who have created the most chances so far this season: 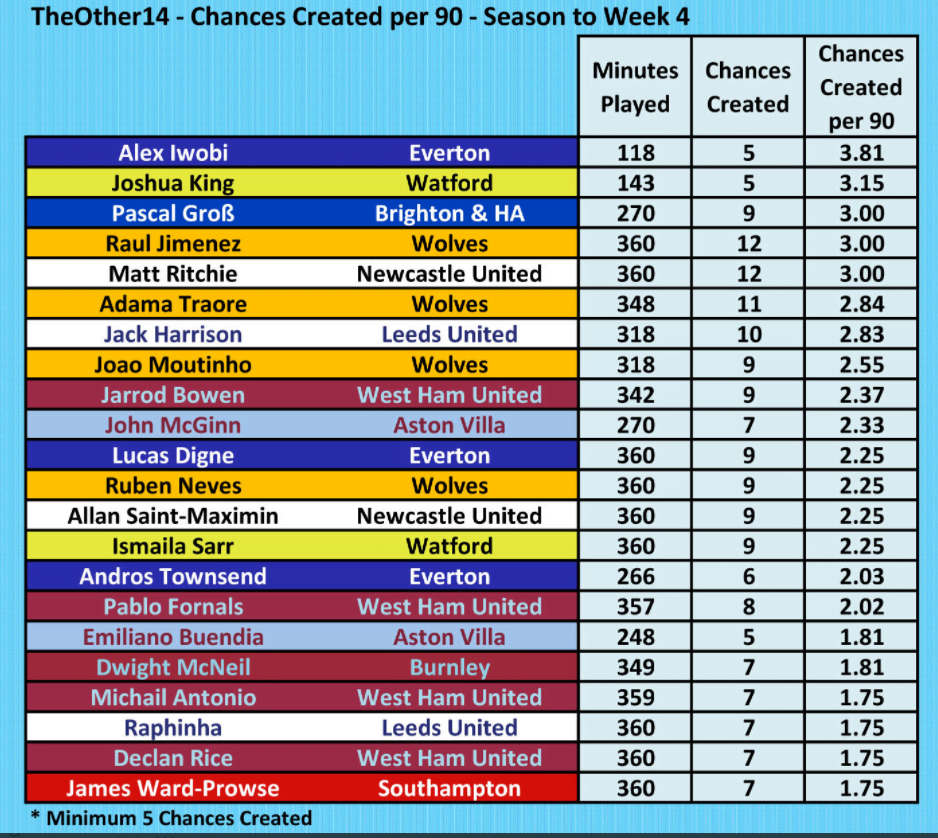 As you can see, no other player in the ‘other 14’ clubs has created more chances than Matt Ritchie in the opening four matches.

Only three ‘other 14’ players have a better average of minutes to chances created.

However, at the same time, Matt Ritchie has really struggled at the back and indeed a number of goals have seen him at least partly to blame.

The wing-back system appears to bring out the best in Matt Ritchie going forward these days BUT at the same time leaves Newcastle weaker in defence. Indeed, I think it is the same with Jacob Murphy on the other side, thriving going forward but very weak at the back.

So with Newcastle United having conceded more goals (12) than any other PL club, does Steve Bruce persevere with the wing-back system and keep Matt Ritchie in the team, or goes to a back four and / or replaces Ritchie?

If going back to playing as a winger, I don’t think Matt Ritchie would be anywhere near as productive going forward, so I do think he is in the team either as a wing-back or not at all. Something which may be the case with Murphy as well possibly, though not quite as clear cut.

Interesting to see what the team is against Leeds and indeed the formation. with Matt Ritchie maybe one of the biggest decisions to make.