Lawrenson’s mate has already seen seven games without a win so far this season.

Newcastle United are already out of the League Cup having lost at home to relegation rivals Burnley, after Bruce made nine outfield changes, whilst in the Premier League it is only three points from a possible eighteen for NUFC.

The big worry as well, is that this shocking start to the season has come about despite a very generous set of opening fixtures. Bruce’s Newcastle unable to beat any of Southampton, Leeds, Burnley, West Ham, Villa and Watford.

Wolves on the other hand, have managed to win two of their last three Premier League matches, away at Southampton and Watford.

Mark Lawrenson believing that Wolves ‘are playing like a team whose confidence has come back.’ The BBC Sport pundit believing that Bruno Lage can build on these six points from the last possible nine.

The other massive thing in their favour is that they now look to have a fully fit and mentally ready Raul Jimenez finally back, Southampton were the better team but the Wolves striker got a big morale boosting only goal of the game.

Before that, in four of the other five Wolves PL matches, Bruno Lage’s team had fallen into a routine of playing well, keeping it quite tight at the back as they have only conceded five goals in their six PL games, but in the four defeats they hadn’t managed a single goal.

Losing 1-0 at Leicester despite Wolves having 17 shots to 9 for the Foxes, before losing 1-0 home to Spurs even though having a shot could 25 v 8 in favour of Wolves.

Yet another 1-0 defeat, home to Man Utd, where Wolves were the better team, failing to take advantage though of 15 v 10 on the shot count and 6 v 3 when it came to efforts on target.

Completing the set, Wolves losing 2-0 at home to Brentford despite 62% possession and 11 v 9 shot count.

Wolves just may be on their way back and after punishing two poor teams in Southampton and Watford, Mark Lawrenson thinks they are about to do the same to a third.

He forecasts Steve Bruce going with negative tactics and losing 2-1 to a Wolves team now taking some of their chances.

It gets worse for Steve Bruce though, this is how the Premier League table currently looks ahead of the weekend’s games: 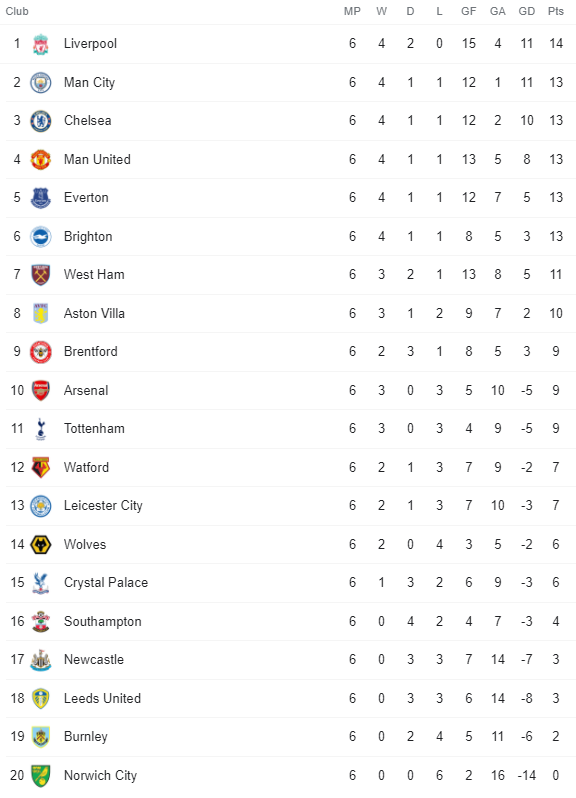 As you can see, Newcastle only outside of the relegation zone on goal difference.

Well including Wolves v Newcastle, eight of the bottom nine play each other this weekend.

If these results do happen, going into this international break, the bottom four would look like this, number of points before each:

This would be a disastrous set of results for Steve Bruce and already a gap opening up to safety.

After Wolves, Steve Bruce and his team then have Spurs and Chelsea at home, sandwiching an improving Crystal Palace away, difficult to see Newcastle picking up many points there after the international break.

Steve Bruce insists Newcastle have been playing well and are entertaining everybody, just unlucky, that excuse is already wearing a bit thin, especially when you look at who NUFC have played so far.

“Wolves have won two out of their past three games and they are playing like a team whose confidence has come back.

“Do Newcastle go to Molineux and set themselves up to be hard to beat, or do they think this is a chance to get a first win of the season and go for it a little bit more than that?

“I suspect it will be the former, but I don’t think it will work.

An open letter to Steve Bruce from Newcastle United fans