Joelinton conundrum has presented itself

Joelinton is, as always, a major talking point this season.

The Brazilian turning 25 the day before the 2021/22 Premier League campaign kicked off for Newcastle United.

Joelinton coming on as a sub in the first three league games, then with Callum Wilson out injured, the former Hoffenheim ‘striker’ has ‘taken the place’ of the number nine in the starting eleven.

Newcastle United failing to win any of their seven games and Joelinton failing to score a single goal, including when he played the full 90 minutes against Burnley in the League Cup defeat.

Business as usual I think most of you will be thinking when it comes to Newcastle United’s record signing.

Yet he does have a small but vocal fan club, certainly on social media anyway, who celebrate any small ‘victory’ where Joelinton is concerned.

It is almost always based around some random stats, supposedly highlighting a lot of unseen, less sexy, work that the 25 year old does, which goes unnoticed.

Following the Watford match, a table has been published by ‘The Other 14’ (who specialise on stats/tables etc on the 14 clubs who aren’t the ‘Big Six’) which shows Premier League players in the 14 clubs who won the most heading duels at the weekend: 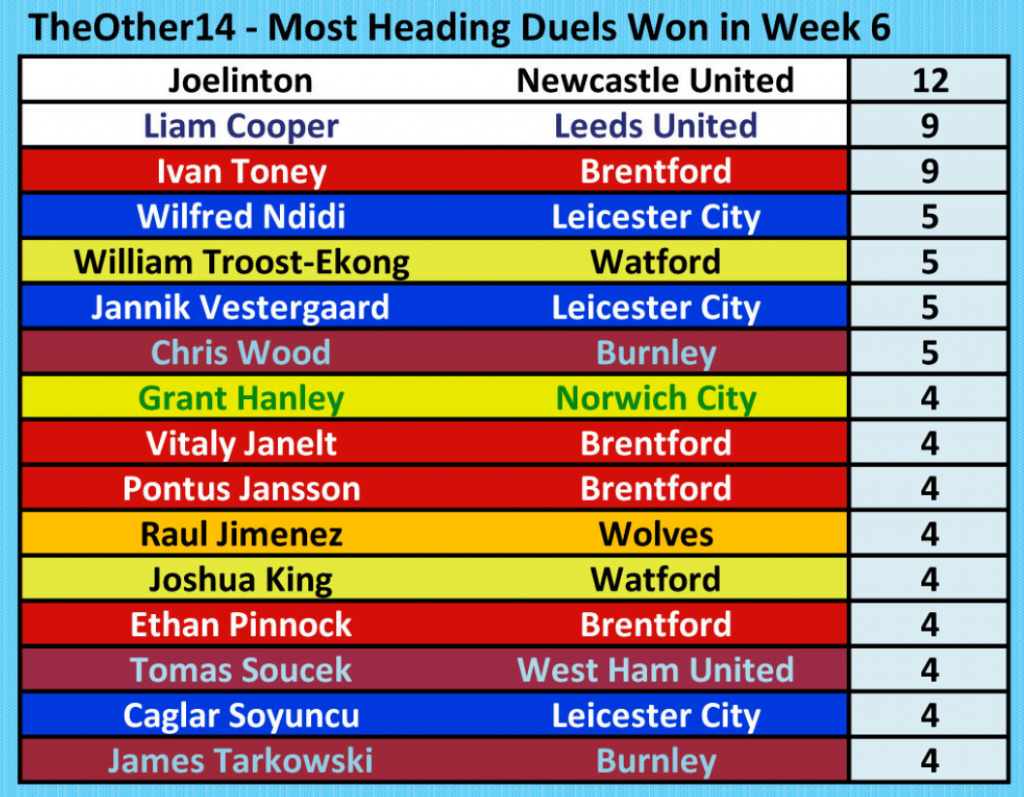 As you can see, no other player in the ‘other 14’ clubs won more than Joelinton.

With 12 he had three more than the Leeds central defender Cooper and Brentford striker Toney, then at least seven more than any other player.

I find these kind of stats bizarre because I watched the whole game and I honestly can never remember thinking, oh there’s yet another header big Joelinton has won.

It is a conundrum for sure.

Though I think I have the reason for the disparity between what our eyes see and these occasional random stats that present themselves, seemingly in his favour.

I believe it is because any of his better stats are accumulated in areas of the pitch where there is little or zero pressure.

Can you honestly say when you last saw Joelinton win a ‘heading duel’ in a dangerous area in a Premier League match, you know, near that thing which has nets hanging off it? I know I can’t.

I thought I’d analyse his PL goals, which is naturally not too difficult as they are so few…

Scored with right foot when unmarked eight yards out.

In on goal a very weak shot from 10 yards out that keeper had covered until diverted it past him.

Squared to him to score from around eight yards out.

Fabianski dropped the ball at his feet one yard out.

Difficult to imagine but actually Joelinton gave us unrealistic early expectations, in only his third PL start it was a very smart finish at Tottenham to win the game back in August 2019.

After that, the goals have been very few and indeed the five PL goals since have included a penalty, a deflection, a one yard gift and a couple of finishes from eight yards or so when unmarked.

Quite extraordinary for an attacking player who has made 75 PL appearances, never mind a £40m record signing striker who was bought by Ashley and Bruce as the answer to Newcastle’s goalscoring problems.

I obviously don’t blame Joelinton for all of Newcastle’s problems BUT He is one of the biggest problems we have. A £40m liability who we can never get rid of and who still has three years nine months left of his ridiculous six year contract and who Steve Bruce is clearly obliged to regularly play, regardless of form and total lack of goal threat.

With six goals, Joelinton averages one every 12 or 13 PL appearances, on assists it is even worse with only five of those in the 75 PL appearances, averaging one assist every 15 matches.

It is actually amazing just how few times Joelinton finds himself in a position where he scores a goal or supplies the pass for somebody else to do so.

I can only think that he is the exact opposite of Alan Shearer. The NUFC legend would run through the proverbial brick walls to try and get on the end of a pass, cross etc. Joelinton seemingly will do everything he can NOT to find himself getting on the end of anything.

However, interesting to look specifically at these heading duel stats above.

What we can take from them is that he is definitely capable of winning headers. At over 6ft 1 so he should, taller than Shearer for example and indeed most other players.

So how is it possible that he can then have not scored a single headed goal in over two years of PL football?

Even if you leave aside balls into the box in open play and what should be the possibility of scoring from them. You have corners and other set-pieces.

In his 75 PL appearances, Joelinton must have been in the box when at least say 400 corners have been put in, yet he has never headed a single one of them into the net. Same with free-kicks delivered into the penalty area, another 100 or so where Joeinton hasn’t headed them into the net.

Whenever I see Joelinton in photos from the training ground and most of the time at matches, he looks like he is enjoying himself. I think he clearly loves being at Newcastle and enjoys the PL money and lifestyle of course.

Yet on the pitch he simply doesn’t have that most important thing, desire. Desire to really attack the ball when it is delivered into the box, inside, I think he must physically almost shrink away from crosses etc.

I don’t see him as somebody who doesn’t care or try, I just don’t think he has it in him, certainly not to be a Premier League striker and in reality not even a PL level player.

Like an unhappy marriage though, at least where we as Newcastle fans are concerned, we are stuck with Joelinton for the years to come of his contract.

Only if Mike Ashley sells NUFC could he then be offloaded for a few million and find some club somewhere in a weaker league who will be able to pay him acceptable wages. In fact, quite probably, Newcastle will end up getting nothing back out of the £40m, as any package will need to be inviting for anybody else who wants him, to be able to afford Joelinton.

There are many other reasons that may contribute to a possible relegation this season but the presence of Joelinton at the club is high on the list.

An open letter to Steve Bruce from Newcastle United fans