Fabian Schar – Does this make it a no-brainer for him to come back into the team v Wolves?

The central defender who shone under Rafa Benitez, decent at the back and very good at playing / bringing the ball out of defence.

However, Fabian Schar hasn’t proved quite so popular with Steve Bruce, the NUFC Head coach only starting the Swiss international in 33 of the 82 Premier League games since he (Bruce) arrived in July 2019.

Steve Bruce clearly isn’t keen on central defenders who can play a bit as well, selling Florian Lejeune and rarely playing Fabian Schar unless his options are limited.

The NUFC Head Coach preferring the likes of the more ‘industrial’ Lascelles, Fernandez and Clark in the middle of the defence.

Bruce even ridiculously playing Isaac Hayden this season ahead of Fabian Schar as a centre-back.

However, does this new stats report make it a no-brainer for even Steve Bruce, that Fabian Schar comes back into the team v Wolves?

A table has been published by ‘The Other 14’ (who specialise on stats/tables etc on the 14 clubs who aren’t the ‘Big Six’) which shows Premier League players at  the 14 clubs who have averaged the highest number of accurate long passes per 90 minutes, in the opening six rounds of PL matches: 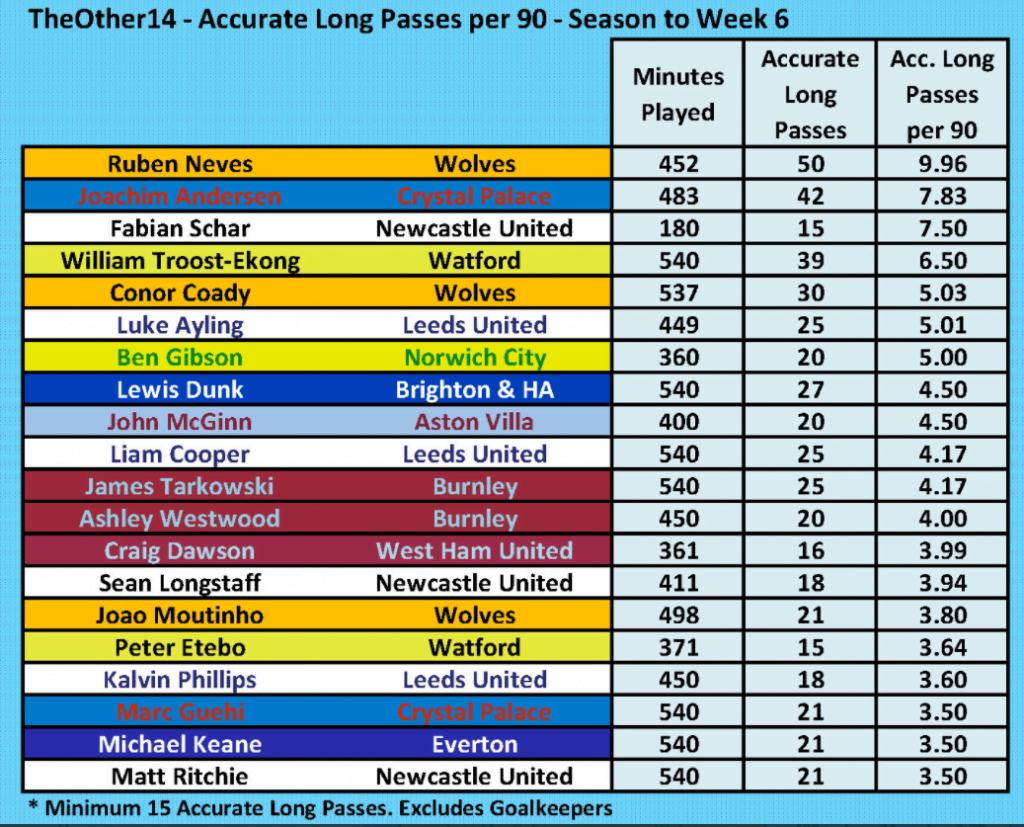 As you can see, only two players of non-big six clubs can beat Fabian Schar for long range accuracy this season.

Schar averaging 7.50 accurate long passes per game, a long way ahead of NUFC’s next best, Sean Longstaff on 3.94 per 90 minutes and Matt Ritchie 3.50 per game. Amazingly, no Jamaal Lascelles featuring…

Personally, I do think it is a no-brainer for Fabian Schar to play, considering the current competition at NUFC.

He has only played in the 2-0 defeat at Villa and 2-2 draw with Southampton in the Premier League this season and if you remember, Fabian Schar stepped up the pitch and hit that superb diagonal ball right onto the head of Jacob Murphy running into the box, with Callum Wilson then converting into a goal.

In these last two matches against Watford and Leeds, if Fabian Schar had been playing then I think he would have boosted that average 7.50 accurate long passes even further, as there was so much space in both games. Plus, with his ability on the ball, he would help NUFC keep far more possession as well.

Alternatively, if Steve Bruce still refuses to play Dwight Gayle in the absence of Callum Wilson, maybe Brucey should consider playing Schar up front instead of Joelinton.