One of the newer statistical models which has been increasingly used in football over the last few years is the Expected Goals model (XG).

‘Expected Goals (XG) measures the quality of a shot based on several variables such as assist type, shot angle and distance from goal, whether it was a headed shot and whether it was defined as a big chance.

Adding up a player or team’s expected goals can give us an indication of how many goals a player or team should have scored on average, given the shots they have taken.’ (Opta)

The concept seems to frighten a lot of fans who see it as some kind of ridiculous impossible to understand witchcraft which has no real meaning or insight into how a match has been played out.

Maybe if it was called most and best chances, instead of Expected Goals, then it wouldn’t worry these sceptics quite so much.

To put it simply, the longstanding shots stats that are widely used are pretty rubbish, as you can have a team that have 20 shots in a game but they are all from distance and never force the keeper into a proper save, whereas you might only have as few as six or seven shots but if they are all from very good positions close in, they should be all but guaranteeing you should have scored a few goals.

This is what Expected Goals is attempting to do, reflect not just how many shots you have but the quality of them. So the higher the Expected Goals number, the more goals that should have come due to the quality and number of chances.

So…in a newly published stats table, the Newcastle United performances so far compared to their rivals, is perfectly summed up…

The Expected Goals table has been published by ‘The Other 14’ (who specialise in stats/tables etc on the 14 clubs who aren’t the ‘Big Six’): 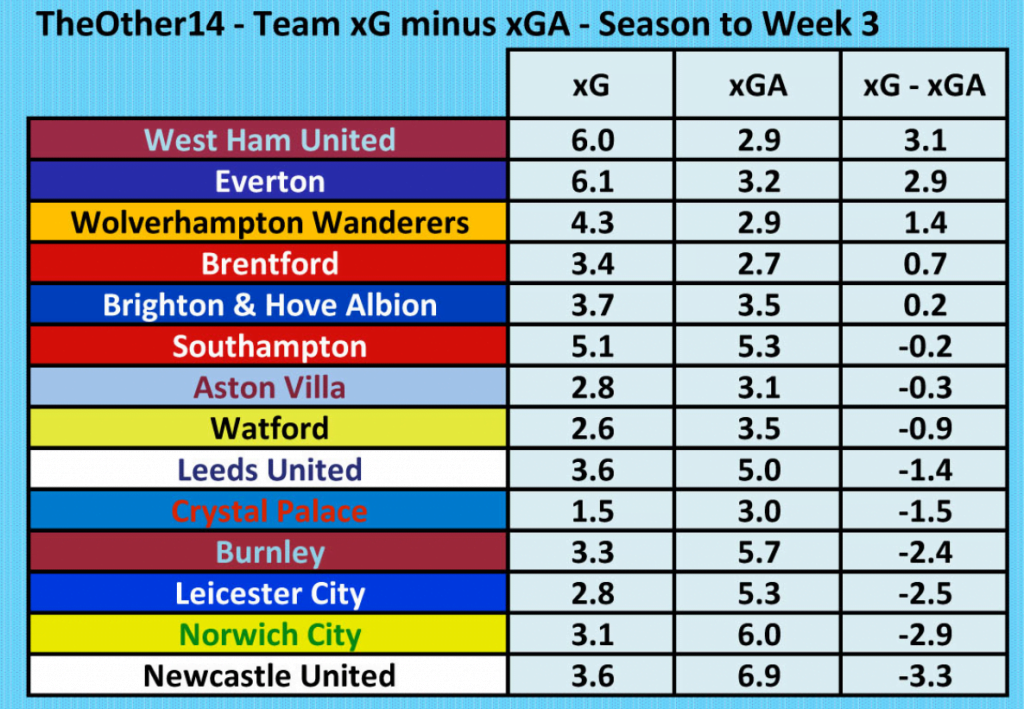 As you can see, Newcastle United at the very bottom of this table, which takes into account each team’s expected goals over the first three matches AND the expected goals for the opposition.

Of the other 13 Premier League clubs featured, only five of them have a higher expected goals stat than NUFC’s 3.6 BUT by some distance Newcastle’s expected goals to concede figure of 6.9 is higher than all of the rest. Indeed, only four others are higher than 3.5.