What do fans of Premier League clubs think about what has been going on at their club and their hopes / wishes for the 2021/22 season?

Well, The Athletic have carried out a big survey of thousands of their paying subscribers.

The Athletic asking the fanbases of all 20 Premier League clubs – ‘Are you feeling hope or fear’ ahead of the 2021/22 season.

This is how The Athletic poll turned out, gauging the sense of hope or optimism ahead of the new campaign: 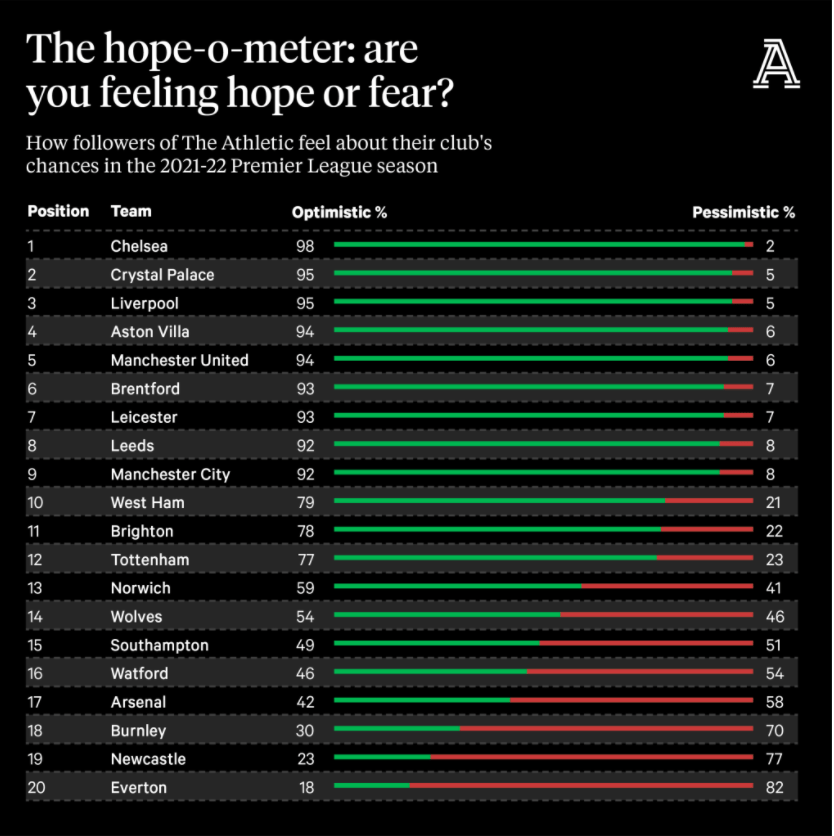 As you can see, their “hope-o-meter” showed just 18% of Everton fans feeling optimistic, he next lowest figure is 23% of  Newcastle United fans.

Amusingly, Man City fans only ninth highest (92%), obviously their club failing in only winning one Premier League title in the last three months and signing only the one £100m player…

The Athletic verdict on Newcastle United and this 2021/22 season…

‘Newcastle? Same again. A club that is barely treading water under Mike Ashley’s ownership and a team that reflects that ambition. Joe Willock’s arrival from Arsenal on a permanent deal is certainly welcome, but it is unlikely to shift the dial dramatically given that he was already a Newcastle player in the second half of last season.

Just 23 per cent of the Newcastle fans we polled are feeling optimistic. That might feel like a referendum on Ashley’s ownership or indeed Steve Bruce’s management, but it doesn’t sound unduly glum.’

Included in the analysis was a graph that looked at the 17 Premier League clubs who were in the top tier in both 2019/20 and 2020/21, it compared how inclined their teams were to press the opposition high up the pitch: 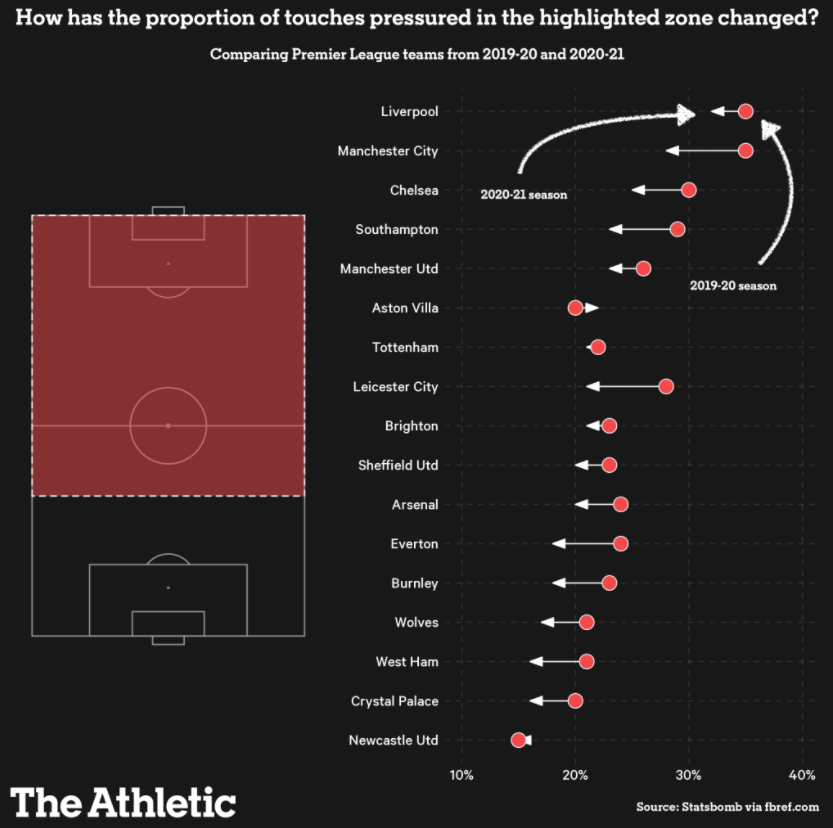 The Athletic were looking to show how in the 2020/21 season for many clubs there were ‘significant drop-offs when it comes to the percentage of opposition touches that were pressurised in the middle and final thirds of the pitch’, those clubs no longer playing quite so high up the pitch, not as high energy. The Athletic picking out Manchester City, Leicester City, Chelsea and Southampton in particular.

If you look at the graph, there is really one massive standout of all the Premier League clubs compared and contrasted.

In both the 2019/20 AND 2020/21 seasons , one club were by a massive distance the least attacking team of all. In both Steve Bruce seasons so far, Newcastle United easily the most negative and refusing to press higher up the pitch, staying camped around their own penalty area for significant periods of matches, simply hoping the opposition doesn’t score.

That kind of average conversion won’t happen again, so absolutely vital that Steve Bruce scraps his over the top defensive tactics and gives Newcastle United’s attacking players a chance to shine.