The Deloitte Football Money League 2021 was published on Tuesday 26 January 2021.

The report covered the 2019/20 season, with Deloitte as usual given access to the figures from every(***) club, despite some clubs not having published their accounts as yet for that campaign.

The big news at the top end of the Deloitte Football Money League 2021, was that Barcelona were now at the very top, taking a major leap forward to overtake Real Madrid.

Barca’s substantial jump on the previous year was put down to the club taking charge of its own merchandising and licensing activities.

With Mike Ashley continuing to show zero ambition on or off the pitch at Newcastle United, nobody expected to see NUFC heading towards the upper echelons of the Deloitte list BUT they were nowhere to be seen in the top 20, nor indeed even in the top 30.

When noting Newcastle United’s absence from the Deloitte Football Money League 2021 report, we (at The Mag) got in touch with Deloitte direct, with the people who prepared the report. Asking whether it was a mistake and Newcastle had simply been overlooked, or it was a case of NUFC had indeed seen falling revenues that took them outside the top 30.

Deloitte replied to The Mag and explained that the Newcastle United absence wasn’t due to either of these potential explanations. Instead, Newcastle United hadn’t supplied the figures when asked, ahead of the NUFC 2019/20 accounts being published.

For whatever reason, Mike Ashley / Newcastle United(***) had decided not to supply the information to Deloitte. This was a repeat of the 2020 Deloitte Football Money League report, covering season 2018/19.

If Deloitte don’t have the figures they don’t guess them, they simply leave the club out.

The 2018/19 Newcastle United turnover turned out to be £176.4m, which when converted to euros using the rate that was used in the Deloitte report at the time, would equal just over 200m euros, which would have put NUFC 22nd or 23rd in the 2020 Deloitte list.

The Newcastle United 2019/20 accounts were finally made public at the weekend by Mike Ashley.

A table has now been compiled by the excellent Swiss Ramble, who specialises in the business of football, this table showing exactly where Newcastle United would have been placed (21st) in the Deloitte Football Money League 2021 (for season 2019/20) if Mike Ashley had allowed the figures to be provided ahead of the Deloitte report that was published in January 2021: 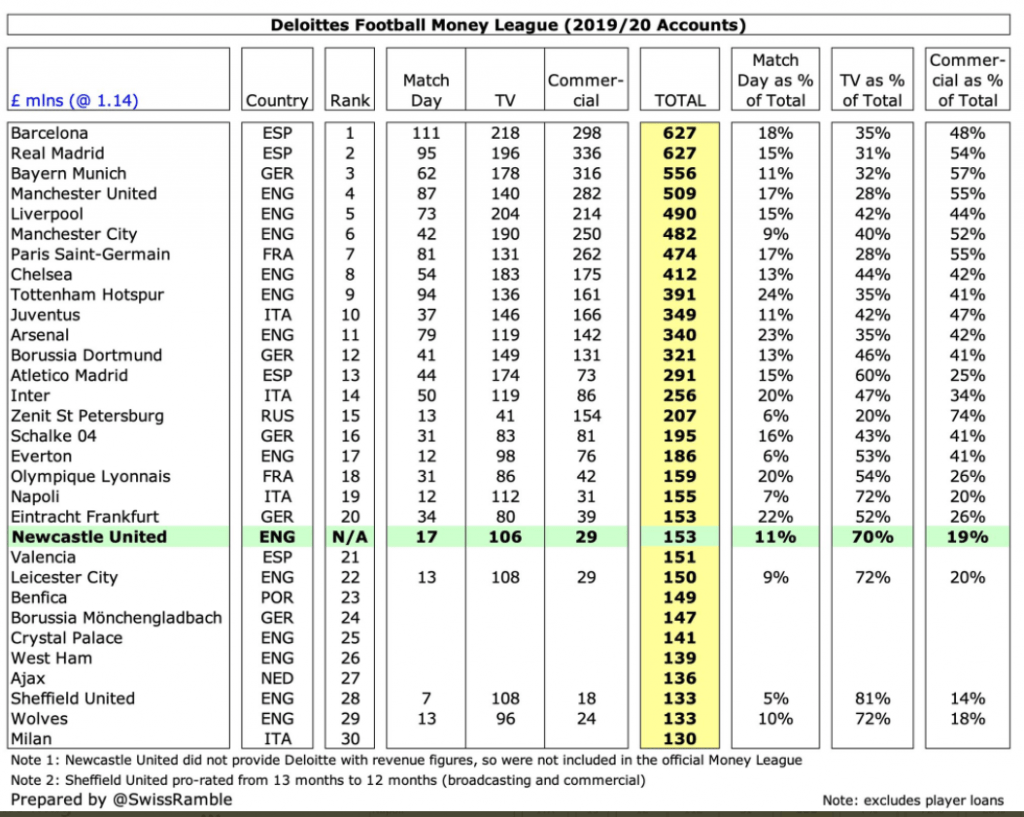 Swiss Ramble adding this text to his table regarding Newcastle United:

“Before Ashley’s takeover in 2007, Newcastle United had the 14th highest revenue in the world, just £19m lower than the 10th placed club.

“In 2020 this gap has soared to £196m, as Newcastle have stagnated and so been left behind by the growth at other clubs.

“For some reason, Newcastle United did not submit revenue details to Deloitte for their annual Money League, which ranks clubs globally.

“Ahead of Valencia, Benfica, Borussia Mönchengladbach, Ajax and Milan.”

Quite remarkable that despite Mike Ashley running Newcastle United with zero ambition and only one campaign in Europe in the now 15 seasons since he bought the club, that the turnover still remains at such a high placing compared to those other clubs in the Premier League and Europe.

This is down to overwhelmingly the Premier League TV contracts that generate more cash than any other European league, as well as the fans, who despite Mike Ashley still turned up in such large numbers and paying higher ticket prices than most PL clubs outside the ‘big six’ clubs. Newcastle fans also key as well for the high number of games featured on live TV season after season.