Interesting to see the impact on the Premier League relegation odds already.

The bookies reacting after just the opening three rounds of fixture.

Newcastle United picking up their first (very fortunate) point of the season as we head into the international break.

Some quite significant moves already after this set of results:

These are now the Premier League relegation odds for the likely candidates from BetVictor, in brackets are the odds that were generally available before a ball was kicked this opening weekend of fixtures:

Probably the most significant move is Brentford, going from 5/4 relegation favourites with the other two promoted clubs, to now sixth most likely at 3/1.

In the process they are now already seen as less likely than Newcastle United to go down. After that very fortunate draw against Southampton, Steve Bruce and his team have seen a big cut from 3/1 down to13/8, seen as fifth most likely to go down.

Newcastle United next go to Old Trafford for the daunting prospect of Ronaldo’s likely debut and Man Utd no doubt going all out for an overwhelming win to mark the occasion.

As you can see from the Premier League table below as we head into the international break, only three clubs below Newcastle United: 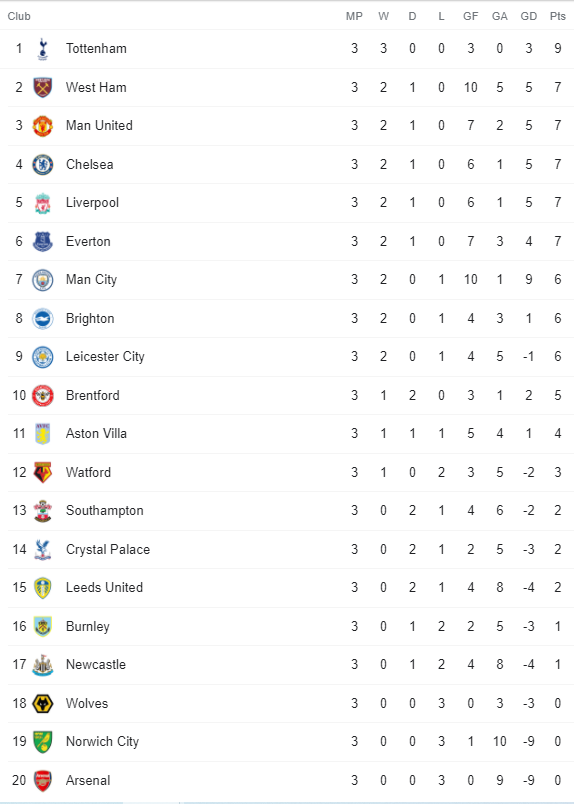 Whilst Newcastle travel to Man Utd, Arsenal are playing Norwich, whilst Wolves travel to Watford. Whilst they are looking a bit of a mess so far, the Gunners will be out of the relegation zone soon. Plus Wolves were very unlucky not just to miss out on a point against Man Utd on Sunday, they actually deserved all three after outplaying the Mancs for large parts of the game – I think they will get out of the bottom three quickly and quite possibly as early as a win at Watford in two weeks time.

Needless to say, points are needed quickly to steady nerves at Newcastle United and the news that Callum Wilson has now got a thigh injury isn’t what we wanted to hear.

That run including four away matches at fellow relegation candidates, as well as tough matches against three of the ‘big six’ who have all started the season well in their opening matches and are top four in this early PL table.