In the last season (2006/07) before Mike Ashley arrived, the Newcastle United Commercial Revenue was £27.6m.

By the time we get to the last available Premier League season accounts of 2019/20 (only finally made public by Mike Ashley last weekend), that figure has soared in the space of 13 years to £27.9m (accounts showed figure as £29.1m BUT that included £1.2m furlough cash that billionaire Ashley has shamefully taken from taxpayers to pay his own staff).

So over a decade later, with the massive growth in popularity and money that Premier League clubs attract, the figure has only improved by £300,000 from before Mike Ashley arrived.

Which obviously in real terms, taking inflation into account, means that the Newcastle United Commercial Revenue has massively decreased since 2006/07.

Then if you take football inflation into consideration…which has seriously outstripped inflation in the general economy, then the negative direction of the Newcastle United Commercial Revenue is off the scale.

It seems almost impossible, considering the fact that every other single decent sized club, has seen their Commercial Revenue increase significantly.

May I remind you of something from our glorious leader, Mike Ashley, this is an absolute classic.

When releasing the 2012/13 accounts, amazingly Mike Ashley actually had this included with the accounts:

“Matchday and commercial revenue is a key driver because that is where the club can compete with – and outperform – its competitors to enhance its spending capabilities.”

Newcastle United Commercial revenue growth over the seasons compared to the successful clubs, this table has been compiled by the excellent Swiss Ramble who specialises in the business of football. 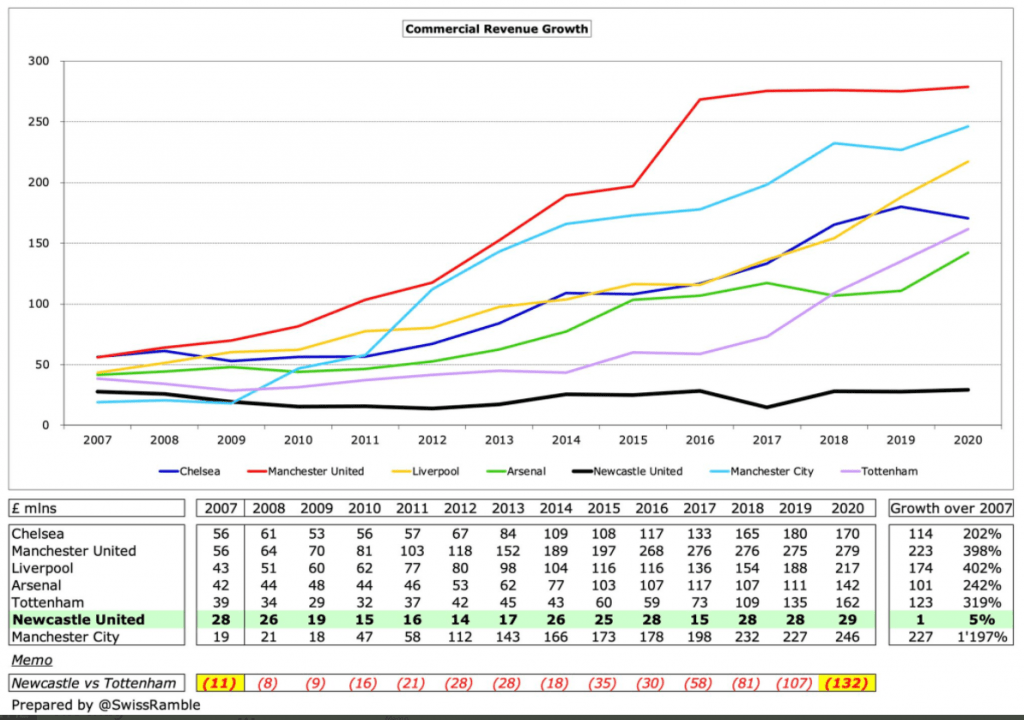 As you can see, all the others increasing by huge amounts, yet quite literally NUFC crawling along the bottom and as explained above, in real terms, massively decreasing.

It is not just against the ‘big’ six where the Newcastle United Commercial Revenue looks ridiculous in terms of comparing 2006/07 to the present day. Every other Premier League club has seen their commercial revenue significantly increase because after all…in such a boom time for football in England, it would have been impossible for these other clubs not to do far better in almost a decade and a half.

In the past, the higher Newcastle United Commercial Revenue of the final years before Mike Ashley took over, has been claimed to be down to Hall and Shepherd taking money early from commercial deals, at the expense of future years.

Then in Mike Ashley’s first season it was £25.9m – 2007/08, so that suggests that the existing commercial deals were still very good due to what had been set up under the previous administration and that they hadn’t taken loads of cash up front that hampered the future.

It was only once Mike Ashley got his feet under the table and agreed his own deals, that things really went downhill.

The Commercial Revenue didn’t just stagnate, which would have been bad enough, it actually significantly reduced.

Also interesting to look back on this from nufc-ashlies.blogspot –  17 August 2014:

‘So, Puma took the kit deal from Adidas in 2010/2011 and there was no increase in income, this is to be expected, Adidas had chosen not to extend their 14 year association with the club following relegation and commercial income was dropping in every area. However, once Newcastle were back in the Premier League, and the deal was renegotiated in 2012, you would have expected some recovery in commercial income from that new deal, at least a couple of million.

There’s no evidence of any growth whatsoever though. Newcastle had qualified for the Europa league, more games, more TV coverage, higher profile, yet commercial income actually went DOWN £2m! How could that be?

Compare this to 13/14 when the Wonga sponsorship clearly coincides with a much bigger bump in growth in commercial income at the club, it’s easy to see the additional value they bring compared to what Virgin Money offered. But Puma kit deals don’t show any corresponding increase.

This opens up a host of questions that it would simply be conjecture trying to answer, but as long as the club will not provide details, we are only left to ask. Have Puma ever increased the amount the club receive in any of their deals with the club? If not why not? Like the stadium advertising, do the deals with Puma somehow benefit Sports Direct and Mike Ashley more than Newcastle United?’