However, late June 2021 saw a new filing at Companies House, this showed that Mike Ashley was extending the Newcastle United accounts period covered, instead of the 12 months up to 30 June 2020 it would now be the thirteen months up to 31 July 2020.

The Companies House records showing that by doing this, Mike Ashley had thus been allowed to also push back the need to file those 2019/20 Newcastle United accounts until 31 July 2021 at the latest. Or else he would be breaking company law.

If indeed they had not been filed by the end of July 2021, yet another breaking of company law by the NUFC owner.

Now we have finally had an update…

No 2019/20 Newcastle United accounts available for public viewing just yet.

However, Companies House have just added an update on this Friday (6 August 2021) morning. 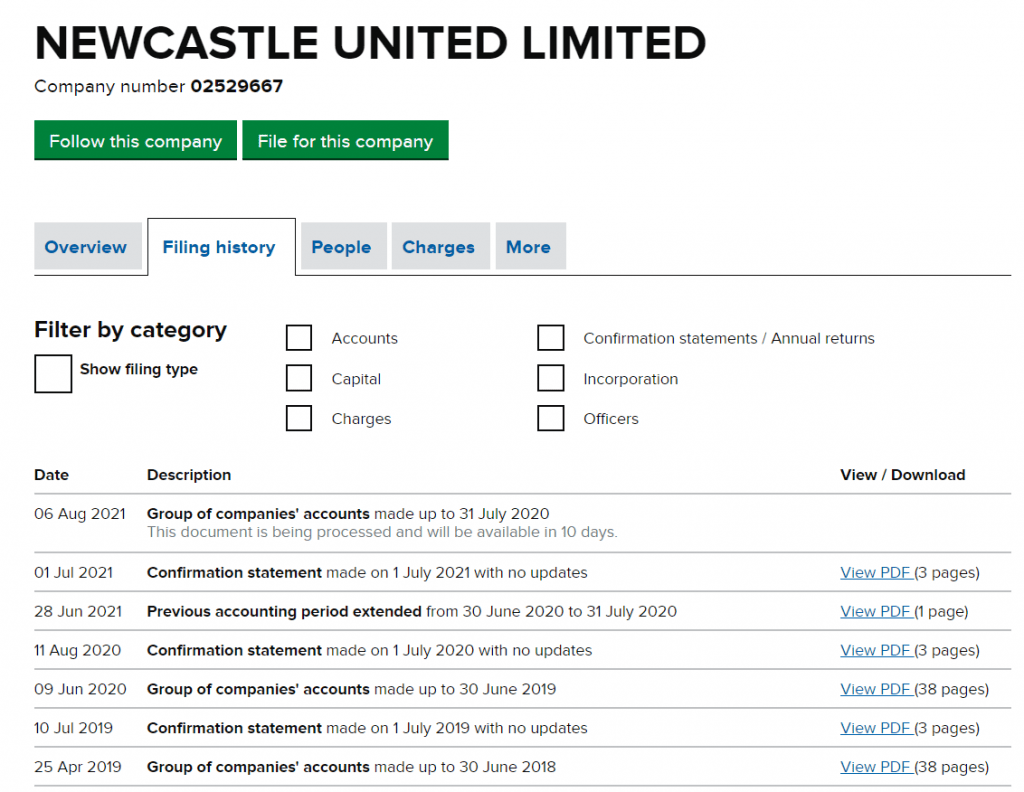 As you can see above, the 2019/20 Newcastle United accounts will be at last (long after every other Premier League club) able to be seen on Monday 16 August 2021.

Mike Ashley having achieved the near impossible, keeping from public view the club’s accounts for two seasons previous until after this new 2021/22 season has kicked off against West Ham on Sunday 15 August, some 26 months after the start of the accounting period that will now be finally revealed…

Quite outrageous really that as things stand we have seen no financial information whatsoever since Rafa Benitez left the club on 30 June 2019, of what has happened at Newcastle United since Mike Ashley forced the Spaniard out and replacing him with Steve Bruce.

Whilst of course we all want to see a Newcastle United takeover happen and an end to this owner’s appalling reign. Mike Ashley has absolute nerve for anything to cry lack of transparency from the Premier League, when at the same time he treats Newcastle fans with such contempt, doing absolutely everything he can to keep fans in the dark for as long as possible when it comes to the Newcastle United accounts…and indeed pretty much every other thing at our football club.