One of the topics of conversation that was running ahead of Saturday’s match, was just how many empty seats Mike Ashley would be looking at when Newcastle United kicked off against Southampton.

Back in the 2019/20 season, a massive number of season ticket holders said enough was enough when Mike Ashley forced out Rafa Benitez in order to bring in yet another stooge.

The net result seeing around 10,000 season tickets going unsold with Mike Ashley and Steve Bruce in position. However, the opening attendance of that 2019/20 season was an in the circumstances decent looking 47,635 to see Newcastle lose 1-0 to Arsenal.

However, by the second home match the attendance was down to 44,157 for the 1-1 draw with Watford, despite Newcastle winning 1-0 at Tottenham in the previous Premier League match.

Long story short, by the time December arrived Mike Ashley was looking at such large numbers of empty seats (officially 9,000 / 10,000 in some games but looking even more than that with some season ticket holders not bothering at times) next to his shop adverts, he gave away 10,000 free half season tickets in a desperate and embarrassing move to fill St James Park.

Fast forward to 2021/22, well over 10,000 season tickets have gone unsold but a decent 50,673 turned up for the 4-2 defeat to West Ham. The feeling though was wondering just how big a part was played by this being the first home match NUFC fans could freely buy tickets for after a year and a half gap?

However, what wasn’t clear to see or find out yesterday was just what that crowd figure was. it was only long after the final whistle that I managed to find out that 44,017 attendance stat.

It was almost as though Mike Ashley had suppressed the announcement of the crowd figure, to try and stop over 8,000 empty seats becoming a big part of the post-match story for both media and supporters. Of course, the Newcastle fans inside St James Park could see the massive number of empty seats but as for the wider fanbase, not a given that they would find out, nor of course neutrals and various media.

I checked back on the club’s official Twitter feed from Saturday, not a single mention of the crowd figure. Hmmm, strange.

Hmmm, no crowd figure put in the header (nor in the entire match report), I wondered how this compared to normal practice… 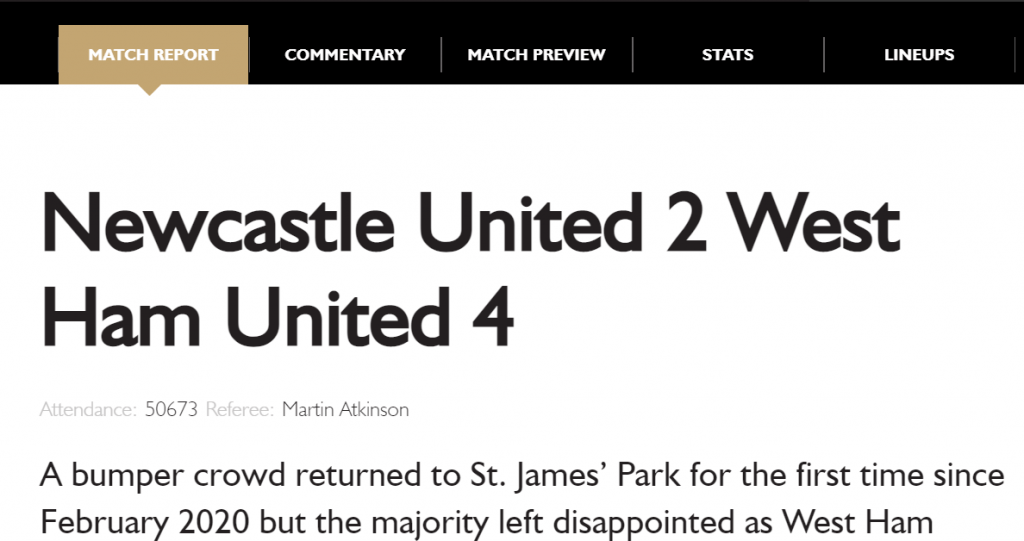 So, is this pure coincidence….

Yet for both the West Ham and Burnley games, they not only put in the attendance figure at the top of the report but also specifically referred to the crowd figures in the respective reports: against West Ham ‘a bumper crowd’ and ‘Playing in front of over 30,000 spectators’ for the League Cup game with Burnley.

Those other two crowd figures more than respectable with over 50,000 for the Hammers and the 30,000 against Burnley (£10 adults, £5 kids) the second highest attendance of the round, only Leeds bettering it.

Would Mike Ashley and his minions really sink so low as to try and suppress the announcement of Saturday’s crowd as long as possible so it doesn’t become a / the story? Well, based on previous behaviour I’m afraid the answer is yes!

If only Mike Ashley put as much effort into running the club properly as he does the PR spin and misinformation / misdirection, we’d be Champions League contenders!

The direction of travel though cannot be ignored, unless something significant changes, we are going to see a replay of the 2019/20 crowds, most likely even worse in terms of the number of empty seats.

What will Mike Ashley do?

Something sensible like replacing Steve Bruce or allowing some proper realistic transfer action by Tuesday night when the window closes?

Or will he be already pondering whether it will be 10,000 or 12,000 free part season tickets he hands out before Christmas?

I know what my guess would be.