1993 edition – Alive and Kicking In Gallowgate

Stuck in a traffic jam in Californian heat, the grinding noise of roadworks, surrounded by misbehaving kids, Garfield stick-ons and flies.

While an accurate metaphor for the club these days (going nowhere, scams, tackiness and irritants), this is the introduction to an iconic movie from this particular summer, Falling Down.

Michael Douglas’ Bill Foster character endeavoured to make his way home to the memory of better times now gone, away from all the hideousness.

As shall we here, to a Newcastle United pre-season teeming with the usual mixture of hopes, unknowns and eagerness to see football again, with the volatile added mixture of entering a higher league and the trepidation that goes with that and the new improved formula of being an ambitious, capable club.

Promotion was new to some, ambition and capability just new. The pre-season of 1993.

Clamour and fervour…and that was just for the new Asics shirts. Getting one was like a childhood Christmas morning. I can feel the grin stretching my face and hear the rustle of that packaging now. Days counted down, queues, supply problem rumours, vans being raided – panic – blood drained from the faces of grown men at the thought of having to wait a while longer to troop the colours. A record £8million in sales of the new shirt were recorded by Christmas, 8 months after launch.

The exponential growth of merchandise, official and otherwise attempted to keep pace with the fervour.

“Its tremendous around the town, its been like this virtually now for 12 months”, said Keegan, its not for everyone (Blackburn may have been more their thing) but both he and the club welcomed, revelled in and utilised this bi-product of being a big club with passionate fans.

Palpable nationally, Bob Wilson summarised the vibe on Football Focus on day one: ”If it was just the passion of the fans and the love of Newcastle football club then they’d win everything,” Keegan referred to the nearing completion of the new Leazes End as being our “cauldron”, which could sum up the general vibe.

It looked so right seeing our name, crest and kit bordering newspaper fixtures lists with all the others that should be there. So new it hadn’t begun and yet classical. Though there was an expectancy we’d meet tougher challenges, not have our own way and a bracing for more defeats, which had become all the more bitter for their rarity. The bullishness of the club to do more than just survive was intoxicating. Even the concept of consolidating seemed bitter to Keegan and Hall, a begrudged stopping off point on a journey. Looking at that fixture list for the thousandth time, the fans may have taken that. Lets not be too ambitious.

There were bitter pills to swallow in selling both Kelly and Peacock. Bittersweet because, on the face of it selling your two top goalscorers as a newly promoted club apparently going places, ordinarily would suggest the opposite, but nobody doubted the course charted. It felt abrupt, ‘just business, nothing personal’. Something we’d become used to and perhaps a necessary downside of growing. Loved them both. Peacock was class with a penchant for beautifully taken goals and Kelly remains surpassed for sure, only by Keegan himself, for me. Many felt something similar about Alan Thompson, clearly a player, being sold to Bolton. The sort of player we’d have grown to rue the sale of at just about any other time.

Although the signing of Peter Beardsley would comfort the loss and be an upgrade on almost anyone. The thought of mixing Beardsley in with the established free-flowing creative football was to effervesce and his proven top-flight experience assuaged me no end.

Hall was famously reluctant to sign Beardsley due to his age, possibly with an eye on the bottom line. But Waddle and McGrath in 92/93 and now Jurassic Park, meant dinosaurs were back in. You couldn’t miss the trailers, the reviews, the interviews, or ‘the making of’ on TV. Likewise the Super Mario Brothers movie. Which looked like the manifestation of a fever.

The song though reminds of that night in Glasgow for Ally McCoist’s testimonial. It was Almost Unreal realising heading home hearing the same local DJ “The Spoon” as I had on the way back from an night friendly at Dunfermline just three years earlier and that en route to Morton a year later before our worst ever season I had a photo taken outside the gates at Ibrox (because we were never going to be playing at grounds like that). The guard perhaps jokingly, perhaps bearing in mind our then status– not, wondered aloud if I was wearing a St Mirren shirt.

Wonder if he recalled that or how far we’d come since, when we won 2-1 against a team that had been a game away from the Champions League final months earlier. Some mackems in the upper tier to our left had come along to antagonise (much like in the comments). It was classic mackem stuff. Presumably unaware of the stabbing incidents at Roker Park recently when they hosted Rangers but you never know. Given short shrift by both sets of fans, a Newcastle win ensued and both sets of fans got along famously. Rangers fans distanced themselves chanting “we hate Sunderland”, applauded by the away fans who reciprocated regarding Celtic, even if we didn’t mean it (not getting political here). Such was the atmosphere on the night, this became “We love you Newcastle” from Rangers and “we love you Rangers” from ourselves. On our way out up the steps, on their way out down the steps in the tier above, I saw women blowing kisses at the fans below and scarves being tossed down as we applauded each other out of the ground. It wasn’t like that at Dunfermline or Morton.

We passed under an advert overhanging a road in Glasgow then and now that read “McEwans’ alive and kicking in Gallowgate’.

Beardsley’s unofficial re-debut came in our first friendly at Hartlepool. Where we got our first sighting of Nicodemus “Nico/Nick the Greek” Papavasiliou, who may have felt quite at home in the coastal Hartlepool sun as we looked over the former main stand to the glistening North Sea, little imagining in similar conditions in Sheffield less than a year later we’d be looking out to Europe again. 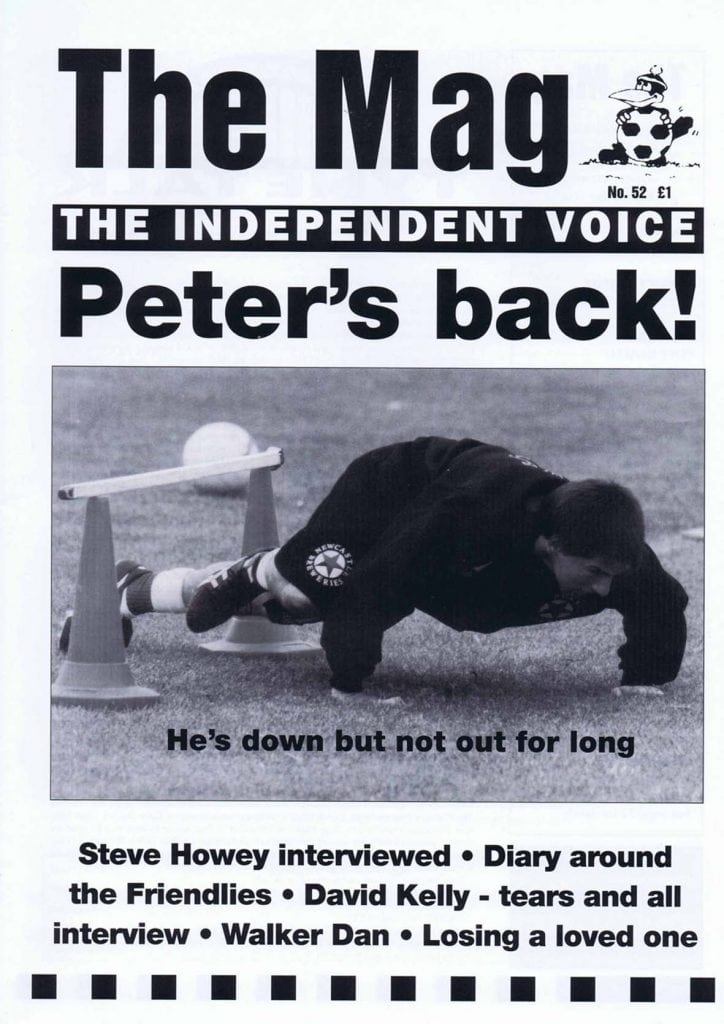 Our preparations began and ended with serious injuries. Mark Robinson lost long-term to a robust early challenge at Hartlepool and Beardsley early at Liverpool for Ronnie Whelan’s testimonial. A transfer target of ours from earlier in the summer, Neil Ruddock showed his new fans what he was all about with a thuggish elbow that put our main man out of the game and the start of the season. Beardsley seemed to make things tick at Rangers and raise the performance and confidence of those around him, especially the youngsters. Doubts over inexperience without him resurfaced and the fact our first impressions on the Premier wouldn’t be fair ones grated.

On the eve of the season Keegan signed Malcolm Allen, widely seen as a fill in for Beardsley, but Keegan reiterated this was no ‘panic buy’, but then being great with the players, he would. Allen had always seemed tidy enough and became another good Keegan signing. 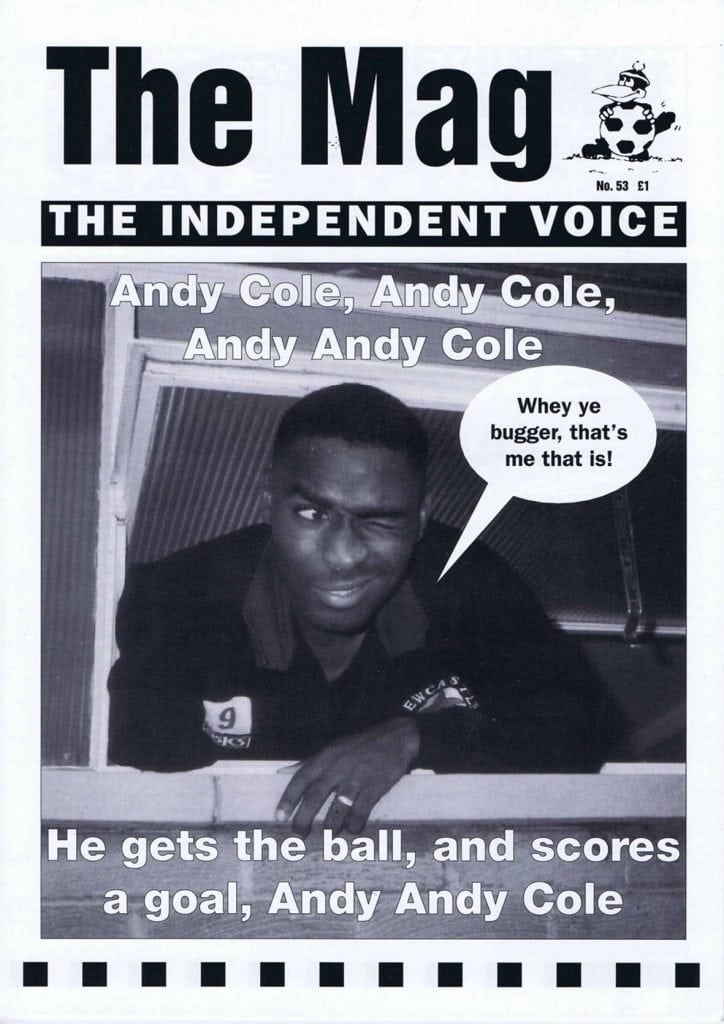 Squad numbers came in. Andy Cole, established from our strengthening in anticipation of promotion, was confirmed as the new number 9. Fans could display their favourites, creativity and their jumping the gun on the back of their shirts. Like my going for Papavasilou, or ‘Nico 18’ (because, howay) on pre-season encouragement. Whilst waiting until after the fact (Sheff Wed) to get the away shirt anointed with ‘Mathie 14’. I’d stick with the number 14 on the next away shirt a few summers later. Beautiful and stylish it would be. The shirt was canny too.

The England manager evolved / degenerated from swede to turnip over the summer of nondescript weather. The Premier League seamlessly became the Premiership. Sir John mispronounced it either way. You can’t abbreviate it though, how could we ever get by without US sport style of abbreviating everything “EPL” “SPL”, “WSL” – “FFS” more like.

There was a substantial and substantiated link to Sergie Yuran with Jan Fjortoft and Geoff Thomas mentioned in dispatches. Thomas went to Wolves, who’d never threatened promotion, but who outspent us as did now first division Forest. Souness, as was custom, spent big and bad to add Nigel Clough and Ruddock to his demolition job. Blackburn surprisingly spent less. Temporarily. They’d spend £8million on Flowers, Batty and Warhurst within months however.

Howard Wilkinson signed Brian Deane for 2.7million. Trying to top selling Cantona to Man United for 1.2million the year before. Man United broke the English transfer record for Roy Keane, who we’d also been linked with. Locally we spent 800k more than our neighbours in the division below, before their third successive year in the lower reaches of the second tier with gates half the size on a good day. John Wayne Bobbit was a summer transfer snip. The transfer being to hospital. 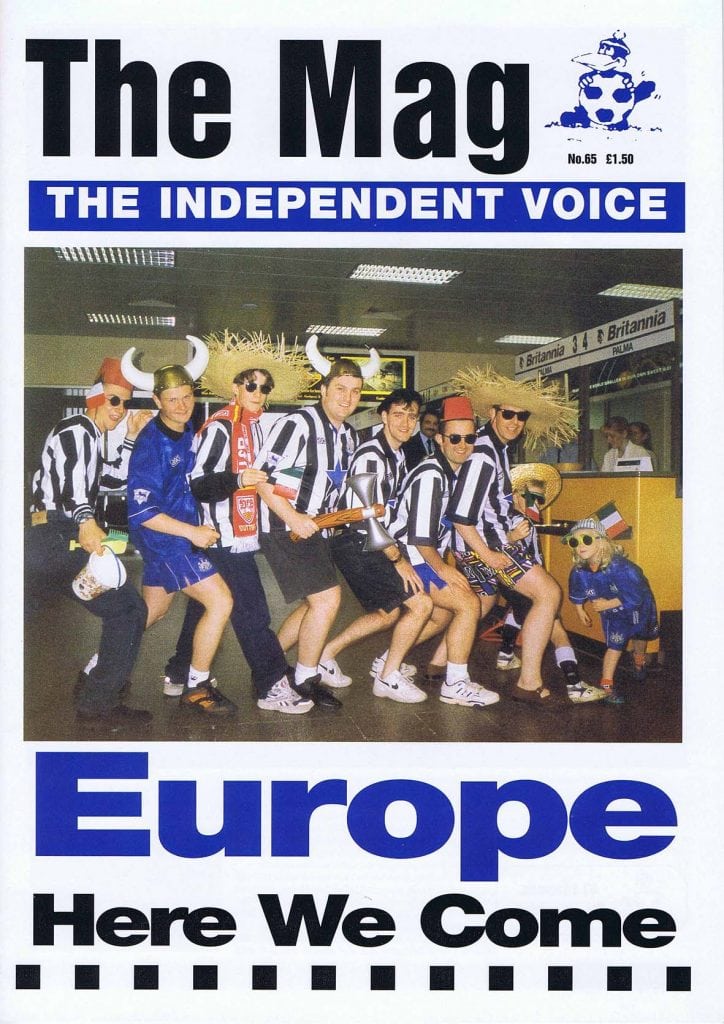 From this spend (250k net, joint 9th highest) in line with our status (every game sold-out, a 5k waiting list, £8million in shirt sales) – the ‘Entertainers’ were born.

If it was as easy as spending money, only Blackburn and Man United cracked it. Keegan: “We’ve put this side together bit by bit. We didn’t go out and do what maybe Wolverhampton Wanderers have done or Blackburn have done, we didn’t go out and just buy everybody”. Unlike Bill Foster we were economically viable and back where we belonged.