Newcastle United fans are still waiting to hear what the injury situation is regarding Miguel Almiron.

Last Monday (28 June) when making his sixth start in three and a half weeks for Paraguay, Miguel Almiron collapsed to the turf clutching the back of his left thigh.

Miguel Almiron helped from the pitch in tears with what looked a bad injury, the only update we have had since then was that it was a ‘muscle edema’ injury and there was definitely no chance of him playing in Friday’s (2 July) Copa America quarter-final against Peru.

That game ended 3-3 with Peru going through on penalties, meaning Paraguay were heading home and Almiron’s participation in the competition was also ended regardless of his physical condition.

However, still no update since then on the injury position, which with less than six weeks to go until the Premier League kicks off, has to be a concern. Monday (5 July) saw the Newcastle United squad return and start pre-season preparations.

Extended holiday allowance due to international commitments this summer, mean that Miguel Almiron was never going to be back with the rest of the NUFC squad for the very start of pre-season. However, we now wait to see whether this injury will delay still further the Paraguayan international’s return.

Interesting though to look at just how good and influential Miguel Almiron can be, WHEN he is played in a way that uses him to the best effect.

South American football fans were asked to name their best 11 players of the Copa America group stages and this was the result: 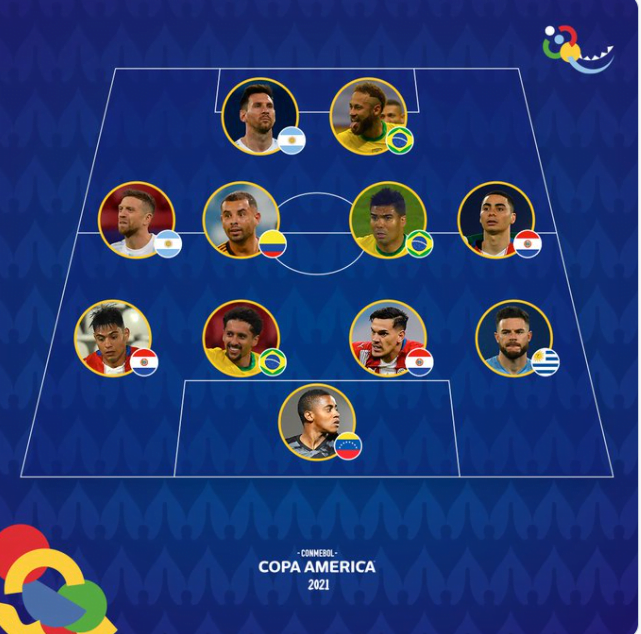 Miguel Almiron a very popular choice as he was selected by fans alongside the likes of Messi and Neymar.

Just to showcase how influential Miguel Almiron had been in this tournament and how badly missed he was in that defeat to Peru in the quarter-finals, Marca Zonal have produced the following stats.

They have highlighted the top five players when it came to progression of the ball up the pitch, the figures showing average metres per game in the 2021 Copa America:

As you can see, Neymar and Miguel Almiron way ahead of the rest, including Lionel Messi.

Brazil have now reached the Copa America final having beat Peru on Monday in their semi-final, with Lionel Messi expected to face Neymar in the final, as later today Argentina play Colombia for a place in Saturday’s final.

As for Miguel Almiron, here’s hoping he will be fit and ready for the start of the season AND Steve Bruce understands how valuable the Paraguayan international can be, if used in the most productive position and system to help get the team up the pitch.