Only two weeks to go until the new season, so how optimistic are the fans of the 20 Premier League clubs?

Well, an independent survey set out to find out who was most AND least hopeful ahead of the new season.

Premier League fans each asked a set of questions about their own club, rating on a scale of 1-10 how optimistic they were.

Manchester City fans were top with an average 9.09 out of 10 level of hope / optimism.

Do you really need to ask who was rock bottom, cut well adrift of the rest, with an average ‘hope’ rating of just 3.94…?

New survey (by Sky Bet) of fans of the 20 Premier League clubs – Finds out how much hope each set of supporters has for the new 2021/22 season:

‘On a scale of 1-10 (1 being not optimistic at all, 10 being very optimistic) Newcastle fans scored 3.94 – the lowest in the Premier League

On a scale of 1-10 (1 being not optimistic at all, 10 being very optimistic) fans of the Toon army rated their hopes as a meagre 3.94, planting them at the bottom of the league table.

Despite comfortably securing survival with April’s Manager of the Month Steve Bruce at the helm, Newcastle fans are not optimistic about the club’s prospects for the 2021/22 season, as 74% of fans believe Bruce isn’t the right man for the job.

Expectedly, only 16% of Newcastle fans believe their club has what is takes to push for a top-half the table finish, with just a small wildly optimistic fraction (2%) of the fan-base believing that Newcastle could challenge for some silverware this year.

The fans discontentment over the running of the club under current owner Mike Ashley is still undoubtedly playing a huge part in the fans lack of confidence, with only 3% of fans admitting they’d be ok with Ashley remaining in charge.

When it comes to priorities for the transfer window, if Ashley is willing to put his hand in his pocket and fund any future signings, 74% of fans have revealed that they’d love to see the acquisition of a new striker ahead of the new season.

The full Premier League Fan Hope rankings can be found below: 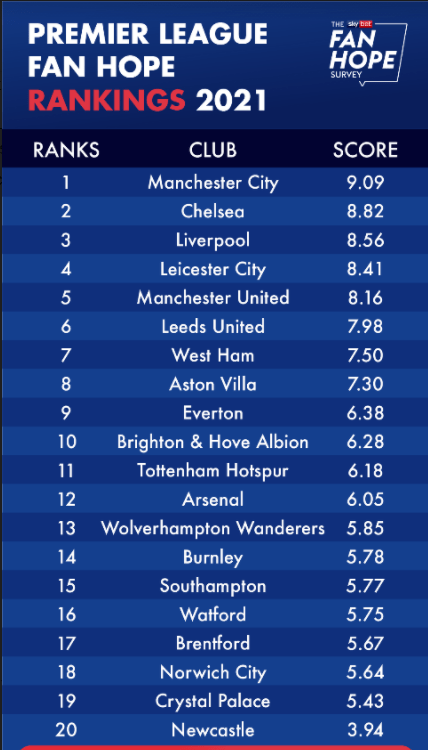 The research was completed by Sky Bet and YouGov as part of their Fan Hopes campaign. The research asked fans of each Premier League team a series of questions about their expectations of the new season.’