Well this worked out just smashing.

My friends live in York and their son Adam happens to be a massive Newcastle fan (due in no small part to being my godson). Here was the option to get to a relatively benign friendly on the hottest day of the year in a city of many pubs, while visiting a brand new stadium for the old record books.

Alright, I had to sign us up as York City members to get around the restrictions but it was no bother and before you know it, me and my son Blake were on the convenient bus from the city centre to the brand spanking York Community Stadium with Adam and his dad Andy, fresh from a few beer gardens. What could possibly go wrong?

The new stadium is a shining example of modern society in one fell swoop. The bus ride is very convenient but I wonder if a capacity crowd might test the travel capabilities to the Monks Cross area in the north of the city. This was no problem for the limited 2,000 crowd though and we were soon looking at the very 21st century development around the ground. A cinema and bowling alley complete with the obligatory Starbucks, Subway etc backed onto the entrance to the stadium, where the helpful stewards allayed any slight concern about us having two little lads in Newcastle kits with us.

Having only ever seen football at St James, the boys were overwhelmed with being so close to the players.

For anyone who missed it, Karl Darlow coming down with COVID had meant a reshuffle whereby a previously split squad would remain in their bubbles, so the under 23 side went to Harrogate while we had the full (available) first team squad trotting out in front of the starry eyed kids. Darlow’s contact with the other keepers meant that the extremely tall Dan Langley was in goal, with Kell Watts also starting after a successful season on loan at Plymouth. Everyone else was what you’d recognise as a first team regular of recent years. The chat amongst our group pre-game was how many Newcastle would win this total mismatch by, against a side five divisions lower than us. Predictions were exclusively 5+…

The first half was a scrappy mess, although I was sort of OK with that to an extent. Training had only resumed two weeks earlier and this was the first proper run out, so a bit of sluggishness was understandable. York seemed well up for the game with a few big tackles going in. This resulted in a lengthy treatment period for Hayden, whilst Joelinton departed after 17 minutes with some kind of knock. Gayle on to replace him alongside Wilson probably meant more firepower up front, so the 5+ predictions stayed firm. Ryan Fraser scuttled away towards the empty north stand but his attempt to lob the keeper landed just the wrong side of the post.

York seemed to be delivering exactly what you’d expect from a non-league side, with former Mag Steve Watson sending out a well organised unit that threatened from set pieces and threw themselves in front of any threat at goal. Langley did well to deal with the occasional effort on target but overall United had the better of the possession, to little effect unfortunately.

The signs were imminent that the second half would promise more, with the young fellas over the moon at the sight of Allan Saint-Maximin trotting out for the second half, albeit at the expense of the relatively quiet Wilson. ASM was the driving force behind a decent period of pressure as the York keeper did well to beat away a vicious Ritchie effort. Gayle went close twice and should have done better with his pair of headers and Watts was unlucky to send his effort just wide from a corner. Saint-Max himself had arguably the best effort as he danced into the box but delayed his shot, giving a City defender a chance to get back and do yet another heroic block. As each wasted opportunity passed by the clock dwindled towards what would be a demoralising no score draw…

We were spared a 0-0 with three minutes of normal time remaining as York enjoyed a bit of pressure down their left before Barrow’s cross was met with a looping header by Michael “Vera” Duckworth, which had such incredible air time on it that it sailed over the huge frame of Langley to give the non-leaguers the win.

As the final whistle went, Blake and Adam made their way to the gate at the front of the stand in the hope of a photo opportunity or even to bag some swag from one of the United players. There were clear pockets of our fans, with a decent amount of noise coming from the South east corner to our right, but the players trudged straight off. Whether this was adherence to COVID rules or plain old embarrassment is inconclusive, but it was another disappointment for the young uns (get used to it lads). 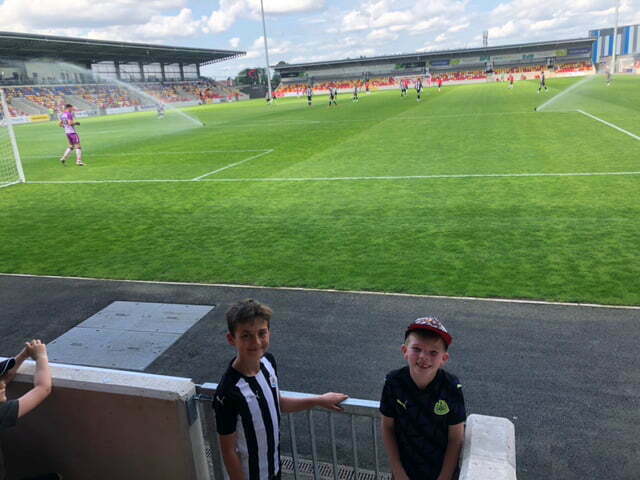 The route back from the ground was impressively efficient, with the number 9 bus parked outside the turnstiles. A ten minute express ride to the centre of York followed and it was straight into the beer garden of the Black Swan. It has happened to me many times in my life where an otherwise excellent day where all goes well and spirits are high is derailed by a Newcastle side phoning it in. This was still fairly new though to Adam, who spent the bus ride in sullen silence, and Blake, who is still small enough to be baffled by the way it all turned out.

There are two ways to think about this sort of poor result pre-season. One is that the primary objective of these games is to get the legs moving and the result is immaterial. If the real season starts with a string of wins, no one will care less about defeat at York and it’s likely (hopeful) that the team will undergo some changes and fine tuning in the 28 days before West Ham come to town.

The second is far more damning, in that it is impossible to ignore that circumstances forced a Newcastle first team into action against a sixth tier side and they lost. On a scale of pre-season embarrassments this is very high, as most poor results will have been patchy sides getting edged out by opposition that at least have league status. Looking further than the defeat, the pattern of play was alarmingly familiar. Three / five at the back to cope with the lower grade opposition instead of a set-up with intention to get forward. Over reliance on ASM as an attacking outlet. Limited striking options off the bench.

While the likes of me had to endure the locals cries of “Premier League? – you’re having a laugh!” (Shame there’s not a tunnel we can scuttle off into lads) Steve Bruce gave a garbled response in his post match presser. The signing of Joe Willock seemed to be looking positive, but Bruce’s sweaty stammerings suggest it could be looking dubious to get the man back who saved our faltering season last year. Bruce also confirmed Florian Lejeune was on his way back to Spain, seemingly more to harvest a fee before his contract runs out as opposed to whether that’s the right move for the squad strength, and that Andy Carroll would not be returning for another contract extension following expiry of his deal.

The Carroll news was expected of course but it actually alarmed me. Carroll’s second spell at Newcastle has been a flop, no doubt, with one PL goal (in defeat) in two seasons. However, he did at least provide an option, with occasions such as Matty Longstaff’s memorial winner against Man U possible due in part to the carnage created up front by the former £35 million striker. This is nowhere near enough to justify a contract, but I found myself thinking, between Andy Carroll and no one, I’d rather have Andy Carroll.

With Wilson prone to injury (I assume/hope there was nothing shady about his half time substitution) there is currently a great deal of pressure on Dwight Gayle, after years of being left out and loaned out, to step into the striker’s boots should something happen to our number 9. In 180 minutes today the only goal two Newcastle sides could muster against lower league opposition was scored by 16 year old Kyle Crossley at Harrogate, it may be that Bruce needs to look to youth for his squad depth, without wrecking anyone’s prospects by rushing it. Elliot Anderson was injured today but his first team integration could become crucial in the campaign ahead.

We all know the crack, we are in suspended animation until the arbitration process (imminent I presume?) is over. If you believe it will deliver new owners, then things will surely start looking brighter. If not, it at least needs out of the way to force the current regime to face the reality of another desperate season ahead, with luck surely running out, not mention patience for the likes of ASM.

Unfortunately, the full time announcements confirmed that York play the mackems next, and I would advise everyone to douse their social media accounts in carp and crow repellent, in anticipation of the league one lot succeeding where we failed today. This will undoubtedly be followed by squawks to the effect that they will be seeing us in the Championship next season. Once again, this can be laughed off with bravado, but once again it looms as a hideously feasible outcome if we sleepwalk through another year of showings like today.

Please give these lads something to cheer in the next few decades, I’m not looking forward to the baffled and sullen bus rides when there’s real things riding on the results.

‘Nobody up here likes a bit of Brucey’

Newcastle United takeover arbitration – Not evidence delaying it yet further, it is the disclosure

At half time, the Sky Sports Producers were having a laugh at Newcastle fans once more