The 2021/22 Newcastle United Premier League fixtures are out.

The new Premier League campaign kicking off on the weekend of Saturday 14 August.

Only two and a half weeks before the NUFC squad return for pre-season preparations and just eight weeks now until the Premier League is back in action and we do it all again.

No details of any changes for live TV matches in this announcement of course.

The Premier League Fixtures as they currently stand, showing home to West Ham on the first game (14 August 2021) and away at Burnley for the final one (22 May 2022). 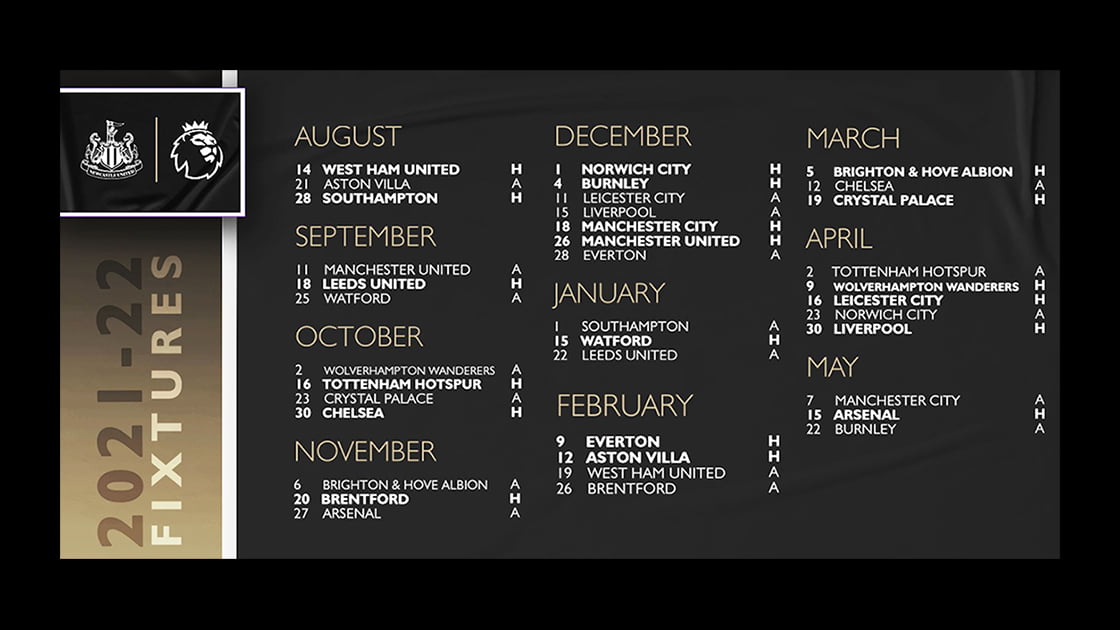 ‘Last season’s win at West Ham was Newcastle United’s first opening day win since 2012/13 – and they will have the opportunity to repeat the feat against the same opponents this term, albeit at St. James’ Park.

That trip to the London Stadium, which saw Steve Bruce’s side triumph with goals from debutants Callum Wilson and Jeff Hendrick, was the first time they’d kicked off with an away game since 2013/14, and they’re back on Tyneside for their first match this time around.

In the previous 117 seasons, United have played their opening game at home on 63 occasions, with 54 away.

United have also played Tottenham and Bolton six times on the opening day.

The first away game comes at Aston Villa, where Newcastle will be looking to fare better than the previous two seasons where their opening road trip has been at Villa Park. They lost 2-0 there in August 2006 and drew 0-0 in their first away fixture of 2014/15.

And their Boxing Day record against Manchester United leaves even more to be desired, with defeats in 1995/96, 2012/13, 2014/15 and 2019/20. However, all of those games came at Old Trafford so Newcastle will hope to reverse the trend in their first ever Boxing Day home meeting with the Reds.

Newcastle are certainly due some home comforts on Boxing Day – this will be just their fifth home Boxing Day fixture since beating Middlesbrough 3-0 at St. James’ Park to go top of the table in 2001.

The Magpies, who finished 12th in the top flight last term, end the new campaign away at Burnley and their win at Fulham last month meant they won their opening and closing games of a season for the first time since 1994/95, when they started win an away win at Leicester and finished with a home win against Crystal Palace.’