What a nightmare for Miguel Almiron.

The Newcastle United star has experienced a June 2021 that he is unlikely to forget in a hurry.

As well as celebrating the birth of his first child this month, the Paraguay international has had World Cup qualifiers to play as well as Copa America matches.

After starting World Cup qualifiers against Uruguay and Brazil at the beginning of the month, Miguel Almiron then having four Copa America group matches.

The Newcastle star starting the defeat to Argentina and both wins over Bolivia and Chile, last night in Rio De Janeiro Almiron started again, this time in the fourth group match against Uruguay.

However, an absolute nightmare as on 30 minutes the Newcastle star passed the ball and as he set off to get a return pass, he went down with nobody around him clutching the back of his left thigh.

Miguel Almiron leaving the pitch in tears with what looks a bad hamstring injury. 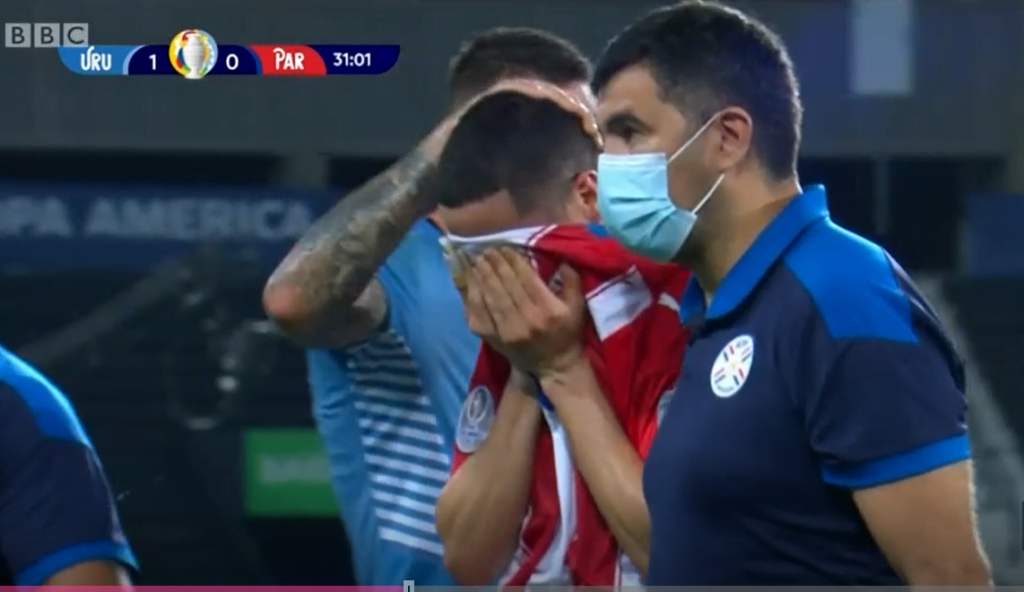 Very unlikely to see him again at Copa America which has less than two weeks left to run, Paraguay facing Peru on Friday (2 July) and the final in only 11 days time on Saturday 10 July.

Massive concerns also for Newcastle, his participation in pre-season was always going to be limited and now indeed the worry will be whether he will now be ready for the new season in just over six weeks time.

Questions should surely be now asked by Newcastle United and indeed concerns should have been raised previously.

Miguel Almiron was making his sixth start for Paraguay this month, despite qualification for the Copa America quarter-finals already assured before this defeat to Uruguay.

Did Miguel Almiron really have to start yet another match, especially as his all action style means he puts so much into each game. People have also voiced concerns about the state of the pitches in Brazil and the one last night / this morning was poor and badly cutting up.

With nothing positive at all happening at Newcastle United and Mike Ashley keeping fans in the dark about pretty much anything, injuries to key players are the last thing we need.

A decent display from Scotland but undone by one very good goal and another exceptional one, Ryan Fraser coming on with 23 minutes to go.

Martin Dubravka celebrating his first ever game in a major finals and it was a winning one.

Emil Krafth played the final 15 minutes as an all hands to the pump rearguard action saw Sweden pick up an unlikely point.

Miguel Almiron and his teammates absolutely dominated with 34 shots to 4 from Bolivia and 79% possession, recovering from going behind to a 10th minute VAR penalty, three second-half goals gave them a deserved victory.

Premier League fixtures released at 9am. Newcastle facing West Ham at home in their first match of the new PL season.

An uncomfortable night for Fabian Schar, Italy looking good and going 2-0 up thanks to a goal from Locatelli in both halves before the Newcastle defender was subbed. Italy adding a third goal late on.

Martin Dubravka pulling off one of the saves of the tournament but then gave away the decisive spot-kick, Sweden’s Forsberg scoring despite the Newcastle keeper going the right way.

Ryan Fraser an unused substitute as Scotland produce the best chances in a poor dull match.

Fabian Schar dropped to the bench after Switzerland lost 3-0 to Italy on Wednesday and was an unused sub today.

A win for the Swiss and defeat for Wales (1-0 against Italy) but it needed a five goal turn around as well. the Swiss left needing two more goals to have finished second in the group and automatic qualification. So instead Wales join Italy in the last 16 and Fabian Schar and Switzerland must now wait and see if they are one of the four of six clubs to finish third in their group but still go into the knockout stages.

Fabian Schar celebrates as defeats for Finland and Ukraine mean that they finish third in groups B and C respectively, both on three points. Which means the Newcastle defender and Switzerland now guaranteed to be one of the four best third placed teams having ended their group A matches with four points.

Emil Krafth another Newcastle United player through to the last 16, as Sweden are top of their group with four points and one game to play against Poland on Wednesday.

Miguel Almiron and Paraguay were the more dominant team but couldn’t find a goal, losing only a second game in their last eleven. This Copa America group clash saw Lionel Messi create a bit of history, becoming the joint most capped Argentina player, now on 147 caps which is the same as Javier Mascherano.

Ryan Fraser introduced in the 70th minute from the bench, with Scotland 2-1 down and needing to win to qualify.

Instead Perisic finished them off when making it 3-1 on 77 minutes, the Newcastle winger unable to change the flow of the game as the Scots bowed out of the competition, the first NUFC player to do so.

A slightly better England performance than the first two, Grealish and Saka easily England’s best two players and they were part of the move that won the game. A superb Grealish cross which made it impossible to miss for Sterling’s header. England having three efforts on target, which equals the combined first two games (two v Croatia, one v Scotland).

A case of the good, the bad and the ugly for Martin Dubravka. A brilliant save from a 12th minute penalty, a horror own goal to put Spain in the lead, then little he could do after that as an all dominant opposition attacked at will, scoring four more goals. Slovakia without a corner or shot on target all game. This means Slovakia exit Euro 2020, as their three points and -5 GD wasn’t enough to be one of the four best third placed teams in the six groups.

Emil Krafth played the final 22 minutes for Sweden. Coming on at 2-2, the Newcastle defender helping his country to a 3-2 win, Claesson scoring in added time. Sweden had already qualified but this result means they have topped the group.

A perfect night for Miguel Almiron, as Paraguay qualify for the quarter-finals of the 2021 Copa America.

The Newcastle star was man of the match as Samudio scored from his perfectly delivered corner and then Miggy himself scored from the penalty spot to ensure the win.

Miguel Almiron making his sixth start for Paraguay this month, with qualification for the Copa America quarter-finals already assured before this defeat.

However, an absolute nightmare as on 30 minutes the Newcastle star passed the ball and as he set off to get a return pass he went down with nobody around him clutching the back of his left thigh.

Miguel Almiron leaving the pitch in tears with what looks a bad hamstring injury. Very unlikely to see him again at Copa America which has less than two weeks left to run and massive concerns for Newcastle, his participation in pre-season and indeed whether he will now be ready for the new season in just over six weeks time.

Fabian Schar introduced in extra time, the 97th minute of an extraordinary match, with the score at 3-3.

The Newcastle defender playing his part in ensuring tournament favourites France didn’t win it in the extra half hour and then all about keeping your cool. Nobody does that much better than Fabian Schar, he coolly scored Switzerland’s second penalty of the shootout, the Swiss triumphant as Mpabbe missed and an incredible night of football ends with the NUFC defender and teammates in the last eight.

Newcastle United splitting their squad and playing two friendlies on this day.

Away at York City with a 2pm kick-off and away at Harrogate Town.

Harrogate have now stated on their website that their NUFC friendly is also a 2pm kick-off (these games linked to training camp at nearby Queen Ethelburga’s Collegiate campus just outside York, where NUFC also went last summer).

Newcastle United first team friendly away at League One Rotherham, kick-off at 7pm.

NUFC friendly away at League One Burton Albion, with a 7.45pm kick off.

Newcastle kick off at 2pm at home to West Ham, live on Sky Sports.

Confirmed as not moved for live TV, 3pm kick-off away against Aston Villa.

Confirmed as not moved for live TV, 3pm kick-off home against Southampton.