BBC Sport is the most reliable source for football news.

It is where many (most?) of us go to, as our main provider of updates and insight into what is happening.

As it’s content is advert free (at least in UK anyway) and therefore no particular compelling reason to run clickbait stories / headlines, it makes it particular attractive to use.

Plus we have all already paid for it (via our TV licenses), so why not?!!

On Thursday morning I went on the BBC Sport site to see what was happening in the football world, especially keen to see their coverage of the punishment handed down to the disgraced ‘big six’ Premier League clubs, who had shamefully attempted to steal the future of football via a European Super League.

This is how the BBC Sport (football) site looked yesterday (Thursday 10 June 2021): 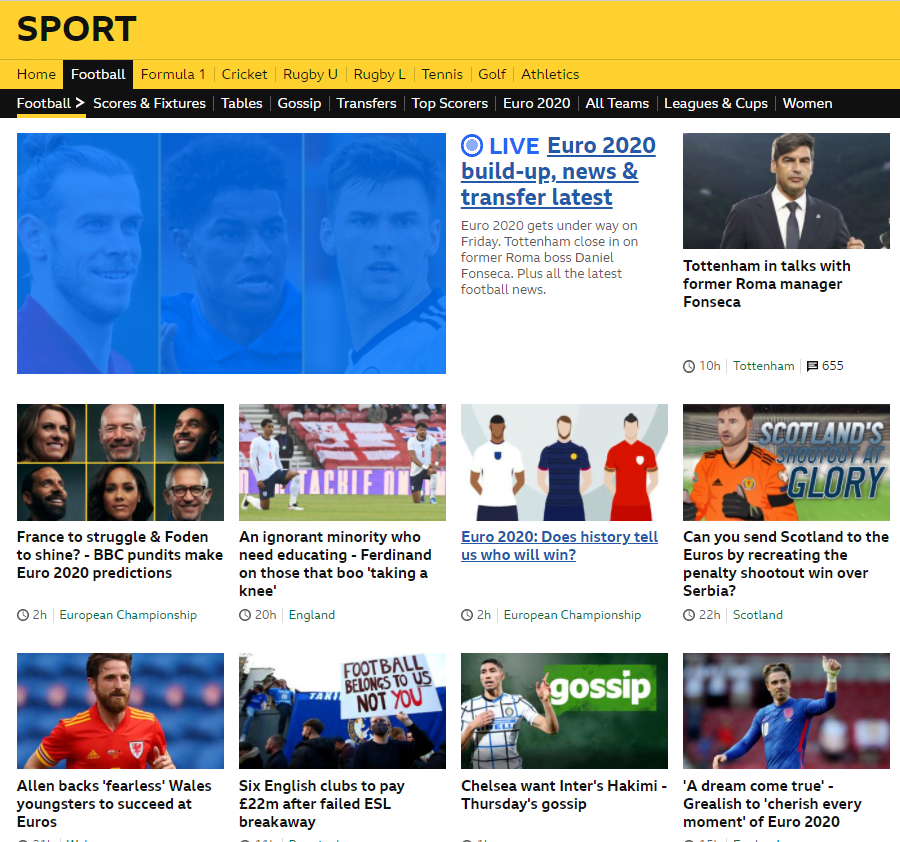 Bear in mind this was only half a day after the Premier League had announced the punishments for Man Utd, Chelsea, Spurs, Liverpool, Man City and Arsenal.

I couldn’t believe it, counting from the top, the shamed half dozen and their punishment was only the eighth most newsworthy story according to BBC Sport!

It ranked behind recreating a Scotland penalty shootout, what Allen thinks about Wales, the latest in a long line of possible Spurs managers, plus a number of assorted Euro 2020 related stuff, mainly the same old recycled / turgid chatter before a tournament.

I went on the BBC Sport (Football) site this (Friday 11 June 2021) morning and there is now absolutely nothing I could see, talking about what the disgraced six Premier League clubs did and / or their punishment.

Counting from the top, this morning there are 58 stories on the BBC Sport homepage and not one thing about the European Super League and subsequent punishment for the clubs.

I find it astonishing.

The fact that UEFA gave such a feeble response in handing down such pathetic punishment with minimal fines for the nine clubs (the six Premier League clubs and three from Spain / Italy) was bad enough.

Then the shockingly poor minimal Premier League punishment of £3.5m (less than any of the six clubs’ weekly wage bill) each club has to pay.

However, the reaction of BBC Sport just sums up absolutely how the ‘big six’ have completely got away with this whole thing.

Six Premier League clubs were part of a secret plot to steal the future of football, put all the power and ever growing revenue in their own hands / pockets, create a ‘competition’ where none of the plotters had to qualify, basically wrecking the rest of football for everybody else, outside of those involved in the disgraceful scheme.

Yet it isn’t even seen as newsworthy when Liverpool, Man Utd, Man Utd, Chelsea, Arsenal and Spurs get their punishment!!!!

So no proper punishment and no coverage of how disgraceful this all is.

I honestly expected it to be top story automatically for BBC Sport (and everywhere else), with a main central piece, then loads of opinion stuff absolutely hammering the disgraced six and especially the shameful agreement they have forced with the rest of the Premier League, not to properly punish them.

Which ideally would have seen them all docked a massive number of points either this season or next season (or both), banned from qualifying for European competitions via their Premier League placings for a number of years, transfer embargo for a couple of seasons, or at the very least a proper fine that would hurt in some way – £50m+ for each of the six clubs.

Instead, we now can see that they have all got away with it.

No proper punishment and BBC Sport and the rest of the media, allowing the whole thing just to be quietly forgotten about.

Totally shameful when you think of how clubs outside the elite have been punished time after time, clubs even forced out of their league, or even in some cases effectively forced out of existence, all for misdemeanours far less serious than what Liverpool, Man Utd, Man City, Chelsea, Arsenal and Spurs attempted to do.

It is a bit like somebody up in court for attempted murder and just because in the end nobody ended up murdered, those found guilty are allowed to walk away with the equivalent of having to pay a parking ticket.