Andy Carroll has been offered a deal to stay at Newcastle United until the end of the 2021/22 season.

Quite astonishing really, even by usual Newcastle United standards under Mike Ashley and Steve Bruce.

When the new season kicks off on the weekend of Saturday 14 August 2021, Andy Carroll will have scored one Premier League goal in 40 months.

Maybe the idea is to keep Carroll so that Joelinton feels a lot better about his six goals in two years and 69 Premier League appearances…?

The Chronicle state as fact that contrary to Mike Ashley and Steve Bruce supposedly wanting Andy Carroll to leave, their information is the direct opposite.

The newspaper stating that Carroll was offered yet another one year extension at the end of the season and asked to consider it whilst on holiday.

Club and player set for talks when Andy Carroll returns from holiday, presumably before that 23 June final deadline for released lists.

Some things just leave you speechless.

Mike Ashley was happy to see top scorer Ayoze Perez (12 PL goals in 2018/19) and player of the year Salomon Rondon (11 PL goals and 7 assists in 2018/19) leave in summer 2019, doing nothing at all to try and keep them. Just so he could push through with his extraordinarily mental plan for Newcastle to pay £43m (according to Ashley) for Joelinton and the PR gimmick signing of Andy Carroll on a free transfer, as replacements.

That brilliant plan saw the Perez / Rondon 23 goals in 2018/19, replaced by the Joelinton / Carroll two PL goals on 2019/20. Which has then become seven PL goals in two seasons in a combined 106 Carroll / Joelinton PL appearances under Steve Bruce.

Following Carroll’s really poor first season (of his second spell) at Newcastle United after Ashley signed him for media attention to distract from a disastrous 2019/20 transfer window, which included swapping Bruce for Benitez, it was beyond belief when Mike Ashley and Steve Bruce then gave the striker another contract.

As the season neared its final stages, Steve Bruce had bizarrely kept hinting that Carroll could be offered a third contract (of this spell at NUFC), but I just filed that amongst the many other nonsense statements that Bruce comes out with, which prove to have little / no connection with reality.

After starting Carroll in the 3-0 defeat at Arsenal in January, the final 20 Premier League games of the season saw no further Carroll starts AND only 19 minutes off the bench!

Indeed, late on in the season when Callum Wilson was injured, Steve Bruce at times chose to play with no out and out striker at all and left both Gayle and Carroll on the bench.

It is both astonishing and depressing that Mike Ashley and Steve Bruce want to give a striker space in the squad to a player who has only scored one PL goal since April 2018 and who will turn 33 in January, a forward who Bruce had no interest in playing this season despite how desperate the team were for goals for so much of the time, as well as that absolutely desperate run of two wins in 21 games.

Newcastle United were so massively reliant on Wilson and Willock scoring 20 PL goals from only 66 shots, the rest of the NUFC squad only scoring 24 PL goals between them (two own goals amongst the 46), with Andy Carroll contributing just the one in the defeat at home to Leicester.

As things stand, Newcastle United are completely relying on Callum Wilson as their only Premier League level goalscorer for next season, with seemingly zero chance of Mike Ashley allowing even a credible bid for Joe Willock, never mind actually convincing him that NUFC would be an ambitious choice. 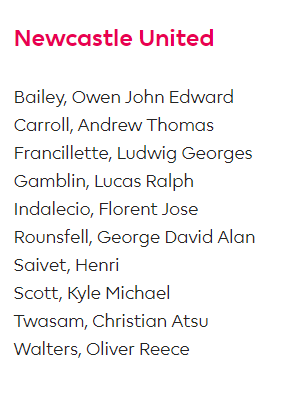 For what it is worth, the Premier League transfer window has opened today…