Long glorious summer days punctuated by football fever which had gripped the nation as Euro 96 rolled into town.

An England side, managed by Terry Venables, thrilled the nation on the way to the semi-finals, before losing to Germany in predictable fashion via a penalty shootout.

There were some wonderful moments that summer, with Paul Gasgoigne’s stunning piece of individual brilliance to loft the ball over the head of Colin Hendry before rifling a volley past Andy Goram in a 2-0 victory over Scotland, possibly the highlight.

After beginning the tournament with a question mark over his place in the team following a lengthy goal drought at international level that spanned nearly two years, Shearer got off the mark in the tournament’s opening fixture against Switzerland and never looked back.

Already considered one of the best strikers in world football thanks to his exploits at Ewood Park which had seen him win a Premier League title and score 130 goals in 171 appearances, his performances at Euro 96 made him one of the most sought after players in the world game. 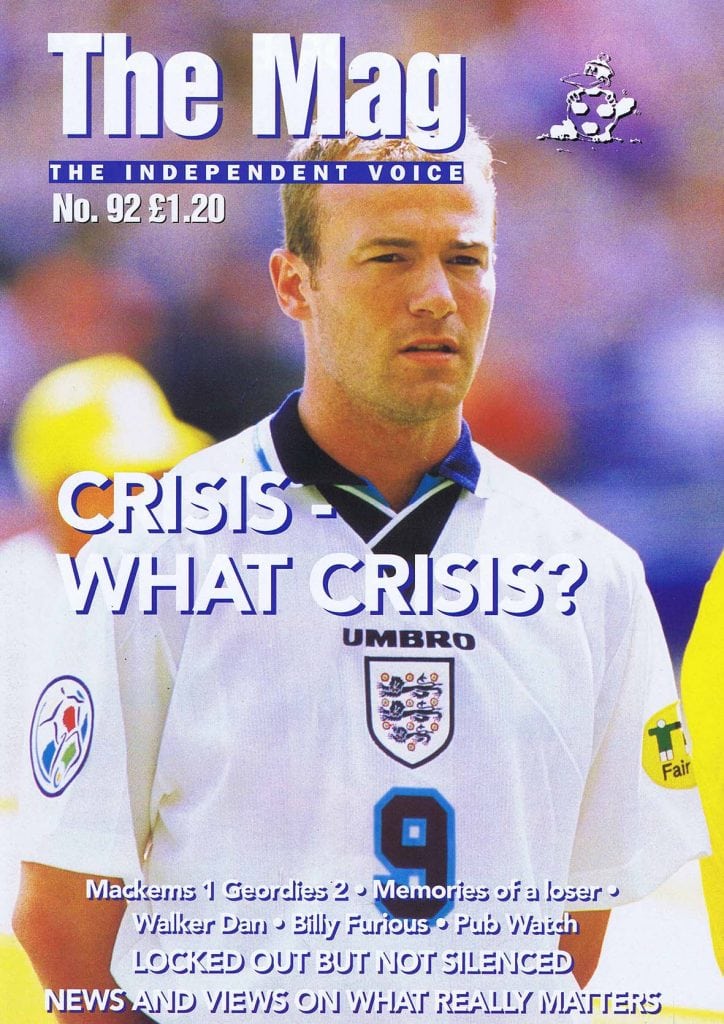 Alan Shearer was simply outstanding for England that summer. Pacey and powerful, with serious injury yet to force him to change his game, he struck up a wonderful partnership with the intuitive Teddy Sheringham, who acted as a vital link between Shearer and England’s midfield.

Although that was a wonderful summer for football fans in this country, supporters of Newcastle United were still struggling to get over the disappointment of the previous season, when a wonderful opportunity to win the club’s first league title since 1927 had been missed.

A thrilling start to the season had seen Kevin Keegan’s swaggering side, led by the attacking talents of Les Ferdinand, David Ginola and Peter Beardsley, open up a 12 point lead over Sir Alex Ferguson’s Manchester United. It was fantastic to watch with Keegan’s side becoming known as ‘The Entertainers’ and widely regarded as many football fan’s second favourite team.

But with the title tantalisingly within our grasp we had let it slip through our fingers. Ginola’s form, so consistent in the first half of the season, began to fluctuate with his moods. Ferdinand stopped scoring with such regularity. Wins became draws and draws became defeats with alarming frequency.

Meanwhile the Manchester United juggernaut was relentless and after an inspired Peter Schmeichel kept out everything Les Ferdinand could throw at him, Eric Cantona snatched a winner at the other end at St James Park in a crucial fixture in early March.

From that point on it was grimly inevitable that the Premier League trophy would end up back at Old Trafford once more.

Following the agonising disappointment of missing out on the title fingers were pointed at a number of different areas.

Did the signing of Tino Asprilla upset the applecart? Was David Batty too negative for the team’s style of play? Should Keegan have strengthened his defence?

Despite the criticism the team sometimes received for their gung-ho style of play the defence was actually pretty solid. We only conceded 37 goals in the league that season which was only two more than Manchester United.

However, we did score seven less than Ferguson’s team.

So in a style typical of Keegan he set out to sign a striker that he believed would be the ideal partner to play alongside Les Ferdinand.

There was only one man that fit the bill in the manager’s mind.

While it was common knowledge that Shearer was a supporter of Newcastle United, he had been widely expected to sign for Manchester United that summer.

However, Newcastle had one other thing going for them that Manchester United did not.

Shearer had idolised Keegan from the terraces as a young boy with a young Shearer one of thousands of fans who had flocked on to the pitch during Keegan’s final match as a player with the club in 1984. 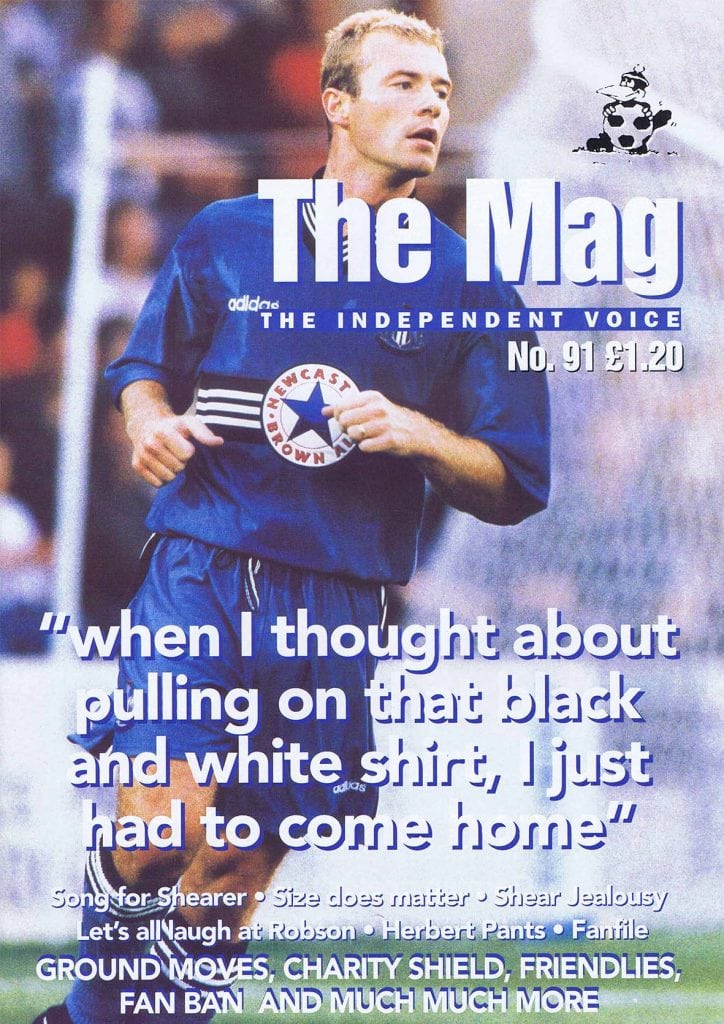 He had also been a ball boy during Keegan’s testimonial.

One of the best players in the world in 1996, he had a big decision to make that summer.

Whichever club he moved to would be getting the best years of his career. Joining Manchester United was almost a guarantee that he would add more winners medals to his trophy cabinet. But the lure of returning home to the club he supported as a boy, to play for a man he idolised, was also extremely tempting.

To the surprise of many, it was St James Park that Shearer chose, with Newcastle and Blackburn Rovers agreeing a world record transfer fee of £15 million.

In an interview with the BBC in 2020, Shearer explained just how close he came to signing for Manchester United and how Keegan played a vital role in influencing what was a huge decision for him.

“I sat down with Kevin Keegan and Sir Alex on the same day. I saw Keegan in the morning and talks had gone really, really well.

“Then the Man Utd contingent came in. His first question to me was: ‘Am I seeing you first or am I seeing you second?’ I told him I had seen Kevin in the morning and I won’t tell you his words. He said basically I’ve got no chance, then. He wanted to see me first.

“But I thought the talks went extremely well. I was very impressed with what he had to say.

“I had to go and make a decision. At one point, I was going to Manchester United. But then, I sat down and I got a call from Kevin who asked to see me a day or two later. And I thought: ‘You know what, I’m going to go back to Newcastle. It was the club I always supported and wanted to play for.

For fans of Newcastle United the transfer went a long way to sweeping away the hangover of the previous season.

Yes, we had missed out on the Premier League title in agonising fashion, and it was still going to take a significant period of time for those wounds to heal.

But we had just strengthened our squad with one of the best strikers in world football. Surely Alan Shearer was going to be the final piece of the puzzle.

The signing represented a real statement of intent from the club that they weren’t going to let the disappointment of the previous season stop them in their quest to end the club’s long hunt for major silverware. 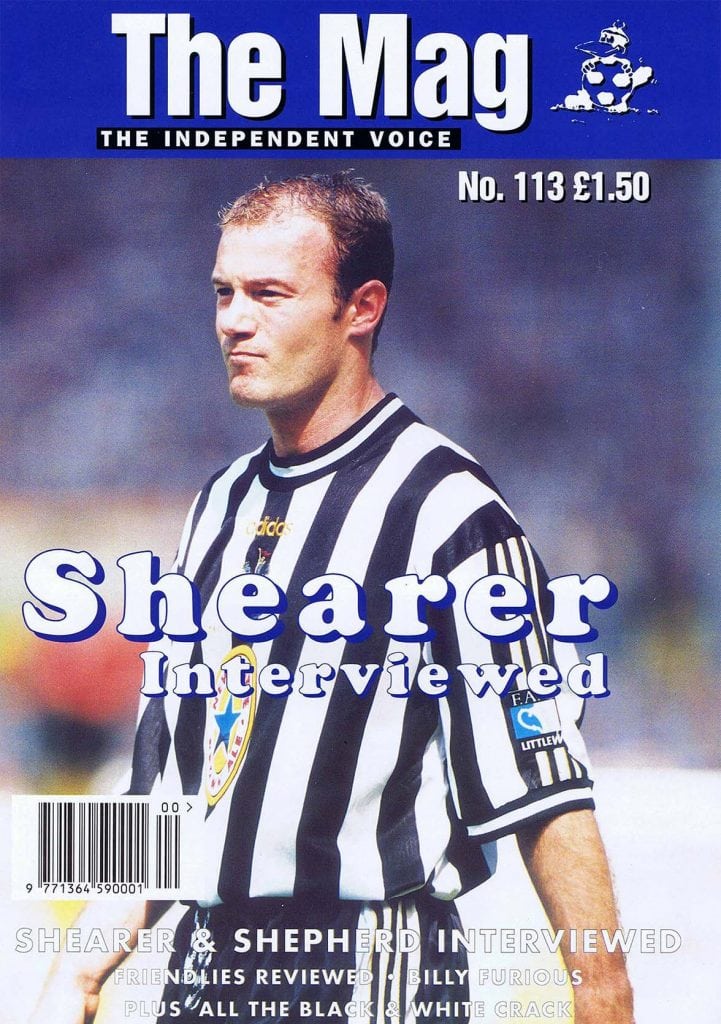 As an eight year old boy, who wouldn’t fully comprehend the opportunity we had missed in 1995-96 until a few years later, signing Shearer meant everything to me. Like Shearer had with Keegan, I would look down from the terraces dreaming of one day following in his footsteps.

His arrival at the club was celebrated in great fashion with some 20,000 fans turning up at St James Park to welcome the sheet metal worker’s son from Newcastle back home.

It represented the start of a decade at the club full of highs and lows, but one that would end with Shearer as the greatest goalscorer in the club’s history, his status as a club legend fully assured.