Today marks the ten year anniversary of possibly the craziest game in Premier League History. A game we will never forget.

Join me in a short trip down memory lane to remember a day that epitomised everything that is great about football.

Newcastle United went head to head with the North London Gunners, in the week following the sale of a certain Andrew Carroll for £35m, with no replacement in the squad.

A performance without the Gateshead Bull was crucial for all concerned. Believe you me; many on the terraces were deeply concerned. Especially by twenty six minutes past three! I don’t know what exactly happened – not very good for a match report I know, but it seemed that the Newcastle United players had mistakenly presumed that the match kicked off at half three and somehow had failed to emerge from the tunnel to kick off. Either that or they had all been playing musical statues, as when the pre-match music stopped they all froze!

Standing like black and white rabbits in the headlights of an oncoming juggernaut the lads stood and watched the Wenger Boys score goals at will.  As four nil down after 26 minutes would suggest! Bloody hell!

The players looked shell shocked as they staggered blindfolded in front of the Gunners crack firing squad. The way it was going I think a few of the fans would have happily taken a bullet to end the misery! Boy did we suffer. From minute one the writing was on the cards for one of those days that you dread. In fact, that is not true – sixty seconds had not even lapsed when 52,000 hearts collectively sank.

Walcott on 44 seconds scores Arsenal’s first – ah b.llocks man. Djourou on 3 minutes with an unmarked header – ah double b.llocks man. Robin Van Persie on 10 minutes – Sweet Jesus, Mary and Joseph NO! And just in case we had any designs on enjoying the match, RVP struck another after 26 minutes – the rumblings of discontent began to spill. It was all too much for some.

We were all over the place, the danger signs were there for a record breaking defeat. I began calculating in my head that if we kept going at that rate it would finish around thirteen nil! Fortunately Stevie Harper prevented another certain goal and an RVP hat-trick before half time. I can’t imagine what would go through the players’ heads if that had gone in at the break five down?

By hook or by crook we managed to get to half time without conceding further ground. The Arsenal players were full of smiles and self-congratulatory back slapping. Job done, you would have presumed. Nobody comes back from that, especially when it has been such a one sided battle. Had it been a boxing match the towel would have been thrown onto the pitch long before the half time whistle had blown.

Luckily, like a storyline straight from Hollywood Blockbuster ‘Rocky’, the underdog always has his day. NUFC as a fighter had been floored by four unanswered haymakers in the early rounds, but emerging from the tunnel for the second half, bloodied, battered and bruised the lads staggered, nay swaggered out with a steely look in the eye that showed not a feeling of pain in the limbs – but of their professional pride being dented. 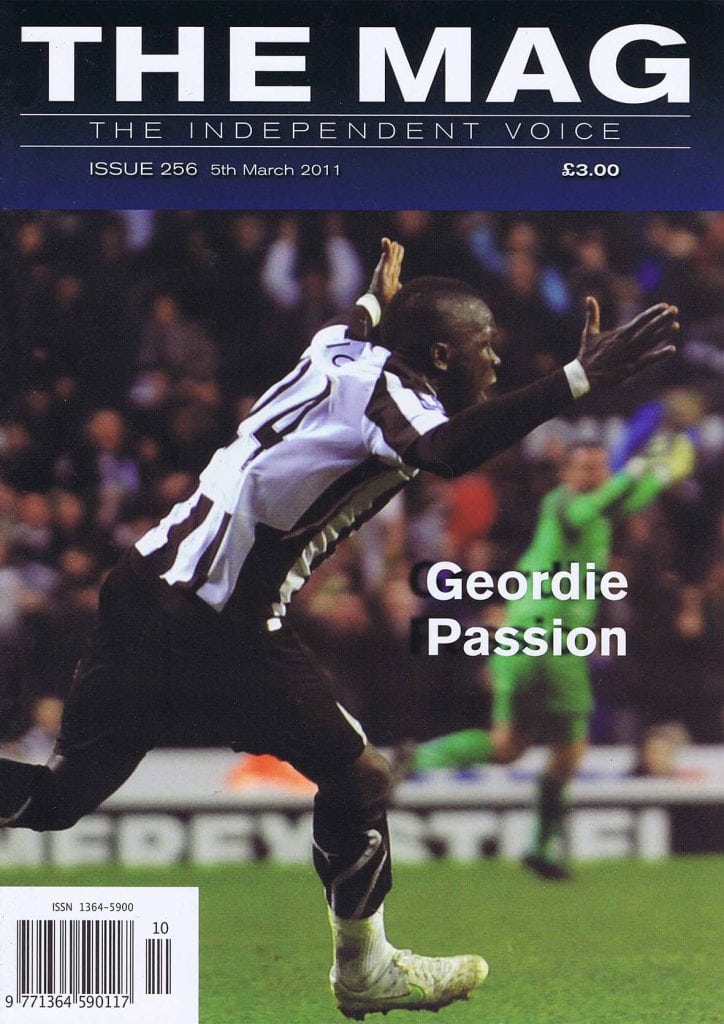 I think the attitude that could only be applied was that of winning the second half for the fans and for themselves. Regain some semblance of credit and worth in the eyes of their adoring public.  Vanquished were the frozen rabbits, enter the fearless tigers who, all of a sudden started to make Arsenal think that they would not have everything their own way.

The experienced players grew and started to bully the once confident but all too flimsy Arsenal. Tackles flew in and the crowd started to slowly ramp it up like only SJP can do. This pressure resulted in a red card for Arsenal following a very hard (but fair) tackle by Joseph Barton on Abou Diaby (50). The Frenchman arose from the tackle and stupidly grabbed Barton around the neck. Referee saw it and flashed the Red. Bye bye Diaby. What had been a stroll for the Gooners was now going pear shaped. Good old Arsene had started fiddling with his jacket zip and bemoaning every decision.

The North London mob under the cosh, began to retreat, the Lads to their credit were really turning the screw. Spirit grew and we went on to floor our cocky opponent four times in reply in a frantic and incredible second half. Newcastle United were about to make history…

GOAL – Barton penalty (68). Get in man! Four – one. Skipper Kevin Nolan getting the Arsenal No.1 in a headlock to retrieve the ball. The Gooners’ players baying unsuccessfully for a reciprocal red card. Surely not?

What follows is the reason why football remains a thing of beauty and the ultimate live theatre. Nothing can replicate the raw emotion of what was about to happen. Tiote was about to do something he had never done before at a moment in time that is now etched into the memories of every Newcastle fan alive. We now all walk this earth with the burned image of our Ivorian Cheick volleying left footed into the bottom corner past a disbelieving Scezny.

SJP Explodes! As does Tiote who runs the full length of the pitch, his team mates in hot pursuit, before being felled and piled upon by team mates. We had fought back to knock down Arsenal with our very own unanswered blows. The last punch had left Arsenal stunned on the canvas, heads spinning in disbelief. But hang on, we have got about 5 minutes left. COME ON UNITED!!!!

Unbelievably United, having been out for the count, were now hunting for the knockout. Then for one unbearable moment the crowd drew a collective breath as the ball drops to Nolan who whistles a shot just past the right hand post. Christ on a bike we nearly won it. Wenger was on his knees by now vomiting in a bucket on the sidelines.

Phil Dowd and his team give Newcastle a final reprieve as RVP is rightly flagged offside for what would have been his hat-trick and a soul destroying winner for the Gunners having been so comprehensively outplayed in the second period. Though no more so than Arsenal had dictated in the first.

Wow. Delirium, pandemonium and utter disbelief. What a game. Unbelievable, unmissable and unforgettable.

Remember, remember the 5th of February. Newcastle 4 Arsenal 4. How can we forget? HTL