The legendary number nine using money generated by his testimonial to fund the Alan Shearer Activity Centre; a highly specialised residential and social provision for people with complex and acute sensory impairments.

The centre needs to raise money year on year to fund the great work it does.

The past year has been especially difficult for charities when it comes to fundraising, so Alan Shearer has came up with a new initiative to raise money for the centre.

The former NUFC number nine donating the shirt and boots he wore when scoring his 250th Premier League goal.

To be in with a chance of owning these unique Alan Shearer items, simply buy a ticket HERE for £10 a go. 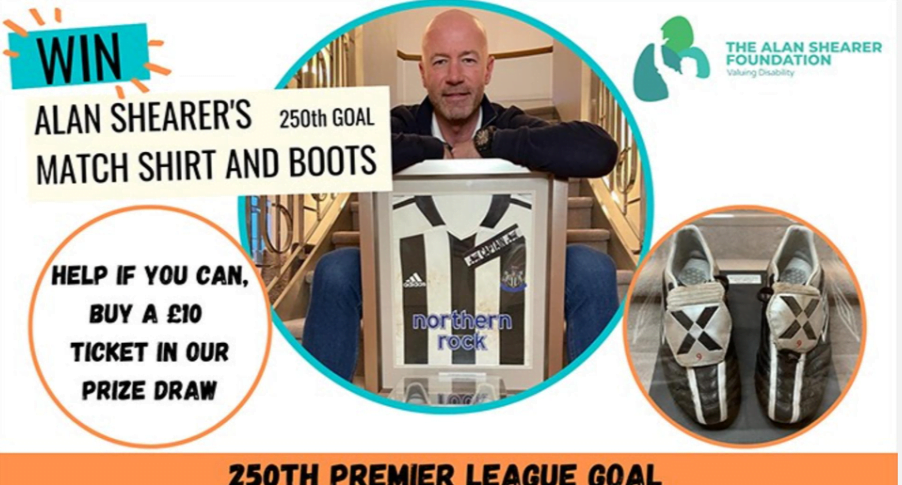 The money is going to a brilliant cause AND you might be the lucky winner.

Here is some more info on the Alan Shearer prize draw from the competition site:

‘Alan has personally donated to the Foundation the match shirt and boots he wore during the NUFC v Man City game played on 2nd Feb 2005 when he scored his 250th Premier League goal, a feat which has still not been surpassed by any other Premier League player. This generous donation will help to raise much needed funds for the upkeep and running costs of the Alan Shearer Activity Centre; a highly specialised residential and social provision for people with complex and acute sensory impairments.

The winner of our prize draw will be given the opportunity of either coming to the Alan Shearer Activity Centre in Newcastle to have the prize handed over by Alan himself or having the prize shipped to their address and taking part in a live video call with Alan.

In 2006 Alan Shearer donated his testimonial money to charity. The largest share gifted to St Cuthbert’s Care (registered charity number 512912), which allowed them to fulfil their ambition of opening highly specialised facilities in Newcastle for profoundly disabled people, known as the Alan Shearer Centre.

Over the years, Alan became more involved with the Centre and wanted to do more, so, in May 2012 in an attempt to raise the profile, it was decided that Alan would launch his own Foundation to exclusively support the Centre. The Foundation is a branch of St Cuthbert’s Care who also own and run the Centre.

In the eight years since its launch, the Foundation and its supporters have raised over £4.1m, which has financed major upgrades to the Centre’s sensory rooms and equipment; added a specialist outdoor play area and funded a £500,000 expansion of the hydrotherapy pool with state of the art equipment. Funding from the Foundation ensures disabled people and their families are able to benefit from the facilities at the Alan Shearer Activity Centre totally free of charge, making it the only Centre of its kind in the region available at no cost.

For every £1 received by Givergy Ltd on behalf of the Alan Shearer Foundation, Givergy Ltd shall receive a fee of up to 2.5% (inc vat) to cover costs of enabling the technology and including payment card fees; you can reduce this by choosing to cover the processing fee at checkout.’

Mini disaster for Newcastle United after incredible result at Brighton