The Deloitte Football Money League 2021 has been published on Tuesday 26 January 2021.

The report covers the 2019/20 season, with Deloitte as usual given access to the figures by clubs, despite some of them not having published their accounts as yet for that campaign.

The big news at the top end of the Deloitte Football Money League 2021, is that La Liga’s big two are at the very top.

Barcelona retaining their number one position ahead of  Real Madrid.

A new club in third position though with Bayern Munich swapping places with Manchester United.

However, English clubs once again dominate overall, with six Premier League outfits in the top 11.

Although Everton (17th) are the only other PL club to make the top twenty. 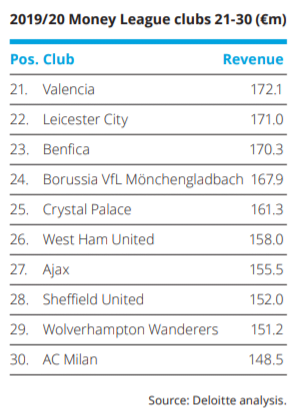 As you can see, another five Premier League clubs make it into positions 21-30, making it 12 English clubs in the top 30.

The club have steadily fallen down the highest turnovers due to the ambition free way Mike Ashley runs the club, only TV revenues rising during Ashley’s reign with commercial and matchday revenues very much the same as they were back in 2007 when he bought Newcastle United. In real terms of course they have down and indeed when you look at pretty much every other Premier League club having significantly increased their revenues in the decade and more since Mike Ashley bought NUFC, it is a grim picture for Newcastle fans as their club is simply existing.

In the Deloitte 2019 report, covering the 2017/18 season, Newcastle United had just held on to their place in the top twenty, featuring in 19th spot, NUFC listed as generating 201.5m euros of revenue.

When the Deloitte Football Money League 2020 report (2018/19 season) was published in January 2020, Newcastle United were missing from the top twenty AND indeed the top thirty.

That seemed a little unlikely despite Ashley’s running of the club and we contacted Deloitte, who explained that Newcastle United hadn’t supplied the figures when asked, meaning they couldn’t be included in the Deloitte 2020 report on highest turnovers of clubs.

Four months after that Deloitte 2020 report was published, on Friday 29 May 2020 the Newcastle United 2018/19 accounts were at last made public (the last Premier League club to do so).

This also meant that we could now see where NUFC would have been placed in the Deloitte Football Money League 2020, if Mike Ashley hadn’t refused to give the figures to Deloitte.

Meaning that if Mike Ashley had provided the figures to Deloitte, January’s 2020 football rich list would have seen Newcastle in 24th spot on 197.8m euros, just ahead of Benfica on 197.6m euros. Falling five places (19th to 24th) compared to the 2019 Deloitte report for the 2017/18 season.

In terms of their turnover compared to the rest of the Premier League, that 2020 Deloitte reports showed that as well as the ‘big six’, West Ham (18th), Everton (19th) and Leicester (22nd) were also now above NUFC, with Newcastle United only the tenth highest Premier League club.

This Deloitte Football Money League 2021 rich list for the 2019/20 season does of course see some impact from the virus, although you would anticipate that this current 2020/21 season will see an even bigger impact on finances at all clubs.

We have once again put a request into Deloitte, asking whether Newcastle United simply didn’t make the top 30 highest football club turnovers, or whether Mike Ashley has once again refused to supply the figures. We will of course let you know what Deloitte come back with.

It would be the first time ever I imagine (as a Premier League club) if Newcastle United haven’t made the top thirty and a sobering thought if indeed the likes of Crystal Palace, Sheffield United and Wolves have all registered bigger turnovers last season.