Coming into this game, I was confident that Newcastle United could beat an Everton team deprived of four of their best outfield players due to injury and suspension…and one of their best four goalkeepers by choice.

The team line-ups suggested that NUFC had the advantage but at kick off, Newcastle’s 3-5-2 looked anything but, when they took the knee.

Daunted by the fact that we had lost shape before the game had even started, my confidence ebbed away.

The game started slowly, very slowly. Everton, missing their best player, one of their best attackers and two supporting full backs integral to their attacking plan, were cagey. With the central midfielders dropping deep and the full backs pushing up without pace or threat, they looked hesitant, comfortable in possession but looking like they were waiting for NUFC to push forward before deciding how to pick us apart.

Little did Carlo Ancelotti know that Steve Bruce had outmanoeuvred him, United had no intention of pushing forward.

A sixth minute long ball over the top to Callum Wilson was the only chance of the first half an hour. The former Bournemouth striker running the right channel and firing hurriedly into the stands from wide.

The game came to life on the half hour, Everton won their first corner, had their first shot, got their first booking and nearly conceded their first goal all within the space of sixty seconds. From the corner United broke quickly, Almiron and Wilson combining to put ASM through on goal. His shot was hurried but on target and the on-rushing Olsen, making his debut in goal, made a good save, spreading himself well to stop Maxi’s attempt. Maxi should really have scored but he doesn’t score enough, an accusation we can level at all of Newcastle’s forwards. Except one.

Though the last fifteen minutes of the first half was better than the previous thirty, it wasn’t until the second half that United looked to have seized the initiative. After 54 minutes that initiative became the lead.

A United corner was played to the near post and Callum Wilson cut across the sleeping Andre Gomes who was trying to volley clear. Contact was made and a penalty was awarded. Contact which would soon see Gomes substituted after failing to recover from embarrassed knee. Callum Wilson put United up with the sort of penalty that looked calm and well-taken but if the keeper had guessed the right way would have been lazy and poor. Never mind, penalties are either scored or missed, nothing else matters. 1-0 United. 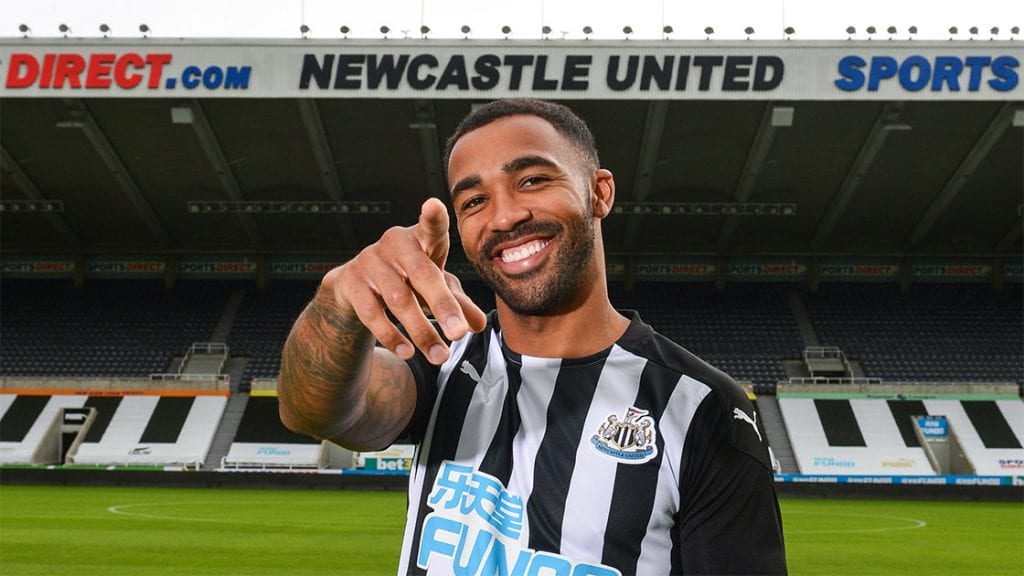 ‘Callum Wilson: The only one who knows where the goal is’

Stepping out of the game for the moment, there is no one on the planet that can convince me that the challenge by Gomes should have been given as a penalty. Not that I am complaining that it was given, NUFC can get all the dodgy penalties going as far as I am concerned until it gets to the point where we are Manchester United and it becomes corrupt.

Had I bothered to listen to the monotonous Sky commentary or equally juvenile MOTD analysis I would no doubt have heard phrases used like “contact was made”, “the defender didn’t get the ball” and “the player had every right to go down”. I’m sure you all have your own opinions, equally as valid as mine, but personally speaking I think football is better as a contact sport, contact occurs all over the pitch and not every time a player is touched is a foul. Most times it isn’t and in this case the contact was so small that it didn’t significantly affect Wilson’s ability to play the ball, a key indicator of a penalty to me. In addition, the referee thought it was a penalty, so did VAR and so did Dermot Gallagher so that generally means that it definitely shouldn’t have been.

United were well in the ascendancy now. Big arms Olsen made an exceptional save from the rejuvenated Sean Longstaff, the best midfielder on show by a mile. The save justified Carlo Ancelotti’s rotation of his goalkeepers and the omission of Jordan Pickford. Longstaff’s shot was about three feet away from Olsen’s body but his reflexes tipped it over the bar. At three feet away from Pickford’s body it would have meant the shot was two feet and eleven inches out of his reach. 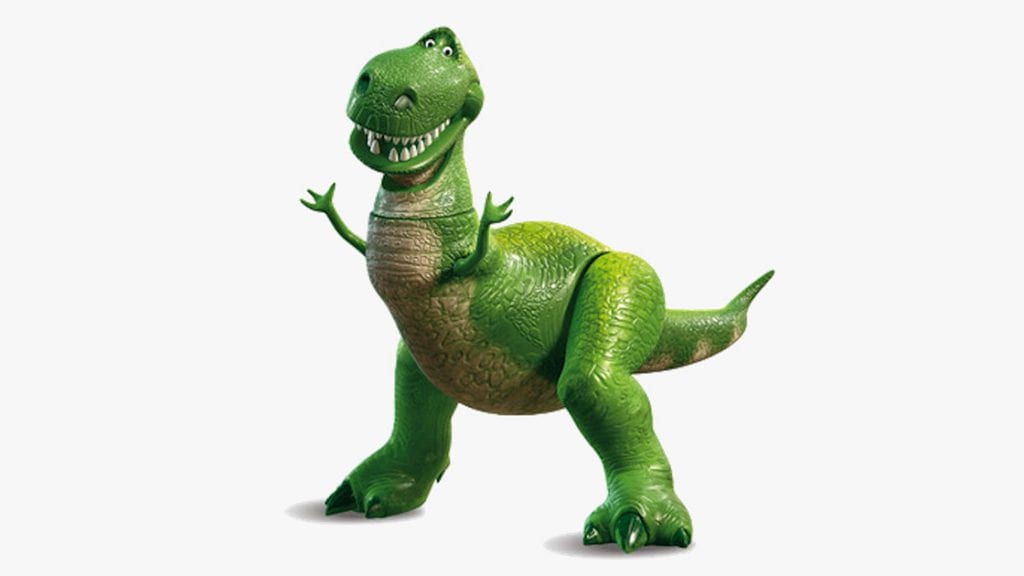 ‘Jordan Pickford: No opposition players were hurt during the making of this match report’

Another lull in the game saw changes come and go and Angry Mina finally getting one of the five cautions he deserved. For United, Fraser came on for ASM, Hayden for Almiron and Everton threw on all of their remaining attacking players with little real effect, these were attacking players not seen for a long time. After 84 minutes Fraser broke past Mina and while he was a bit lucky that his cross was deflected over keeper Olsen, Wilson was on the end to tap in from two yards to put United 2-0 up.

Wilson already looks like he is the player that got into the England squad a few years ago rather than the disappointing figure he cut last season. He has that look of satisfaction in his eyes when he scores, that only natural goalscorers have.

Last season, if a cross had been deflected across goal Joelinton would have been standing on the edge of the penalty area wondering what he was going to watch on Netflix that night and the chance would have gone. Having a proper goalscorer up front is crucial for any team.

The impressive Calvert-Lewin brought it back to 2-1 with a tap in during six minutes of stoppage time where absolute carnage ensued in United’s box. Just how NUFC went from being comfortably 2-0 ahead and keeping Everton at bay to panic defending for the last five minutes is unknown.

Part of it must have been the 86th minute introduction of Andy Carroll. The giant came on and went straight into the fourth centre half position, at least that’s the way it should have been. Bringing him on up front for Wilson was completely pointless, he can’t chase, he can’t run the channels, all he does is look at a ball humped upfield and say “I’m not chasing that, there’s seven minutes left, if I run after that ’ll never last.” At the very least, Bruce could have put Fraser up front and given United someone to chase balls into the channels. Without any outlet, it became a siege. 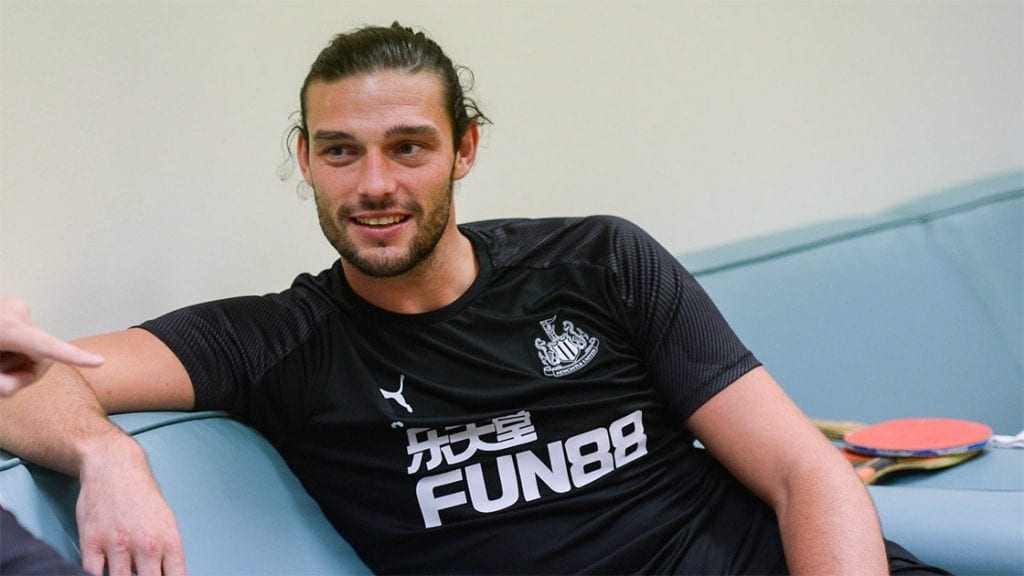 ‘Andy Carroll: comes as part of a package’

Not that it ever looked like real carnage, it was all Blazing Saddles football. Andy Carroll nearly headed into his own goal, a Fernandez clearance ricocheted a metre wide and a late cross looked to be floating in until Karl Darlow tipped it out for a corner. It was all fluky, none of it merited and the ghost of Florian Lejeune never came to haunt us. Game over and United won 2-1, having been the better team for virtually all of what previously passed.

A professional performance then, if not a particularly entertaining one. The defenders and wing-backs all defended well. In midfield, the excellent Sean Longstaff was assisted by Jeff Hendrick to the best of his ability. He is no Robert Lee but he was signed as adaptable cover and that is what he is providing, even if it should only be viewed as temporary. United’s attacking players all attacked well and maintained a threat whenever they could and in Fraser they also have someone desperate to play and keeping them on their toes, the Scot has a bit of pace about him, if he was full size he would be Usain Bolt.

Not that it was all plain sailing, United were so deep for a lot of the game that our attacking players have so much to do when they get the ball that they are knackered once they get into a position to hurt the opposition. United must get further up the pitch earlier if they are to take advantage of the attacking players abilities. The deep counter-attack worked for the Toon’s second goal but that would have been impossible without the first goal and United need other options if they don’t get that.

Additionally, if either Almiron or Maxi have a free role, they just end up making the same runs as each other because they are similar-minded players. If they are both to play and I hope they do, they need to occupy different wings or they just end up occupying the same space too often to be properly effective.

At the back, playing three centre halves under the Spaniard led to some valuable get out of jail goals scored by defenders which seem to have dried up under the Steves. As Bobby Robson found to his benefit, scoring early headed goals from corners is an added bonus to having a bigger team. Something for Bruce to work on, if there is a training ground.

Still, it was a decent performance and a delightfully merited three points against a team who still had to be beaten despite missing their best players. Everton looked completely out of ideas early on but that is perhaps understandable given the players they couldn’t pick. Certainly any PL team would be better for including the brilliant James, the energetic Richarlison, the dangerous Digne and the consistent Coleman. If those players remain fit along with Calvert-Lewin and the defensively strong Doucoure and Allan, then I see no reason why they can’t challenge for Europe.

“They are important players missing. When you don’t have these players you have to play differently, maybe with less quality but with more focus. The goals we conceded, we lacked focus. We have to try to recover players for the next games.”

For the Stevolution, a week off complaining about his treatment and a week basking in the glory of fleetingly being in the top half of the table:

“It’s very rare that you see a team come back to win, so the first goal was critical. I think only he gets the second one. He has got that instinct that you don’t coach. He has proved to be a great signing for us.”

Something we can all agree on along with Bill Shankly:

“If Everton were playing down the bottom of my garden, I’d draw the curtains.”

Not really relevant here but still funny all the same. Maybe the Steves can work on their comedy routine to liven press conferences up a bit and stay out of the politics which Bruce constantly alludes to as being an unnecessary part of the job but seems unable to stay off the subject himself. After his defensive quotes on Friday about supporters who attend the matches backing him, it was good to see him talking him about actual football.

Personally speaking, if the ground was open I would attend SJP and would I tell him he was a load of toss to his face if I met him? Of course not, I’m far too nice for that. He can call that backing him if he likes.

Would I rather have Carlo Ancelotti managing NUFC? Of course I would. I probably would tell him that.

My opinion is not really important though and for the time being in behind closed doors football it is equally irrelevant whether those who would attend the match at SJP support Bruce or not. What is important is that the players do, and in the pampered and isolated world of professional football, that counts for a lot.