An interesting day for Newcastle fans and anybody else keeping a keen eye on the Newcastle United takeover.

On 30 July 2020 we saw the Saudi PIF led consortium announce they were pulling the deal to buy Newcastle United.

Now 15 days later, we have seen both the Premier League and Mike Ashley make their moves.

A relentless campaign by Newcastle fans, backed by over 80 MPs, the Prime Minister and the Independent Football Ombudsman, finally shamed the Premier League into coming out of their bunker.

Chi Onwurah making public a letter she had received from Richard Masters in reply to one she had sent, the Masters responses to the Newcastle Central MP being used also for wider circulation to others by the Premier League.

This is the letter from Premier League CEO, Richard Masters, that Chi Onwurah has received: 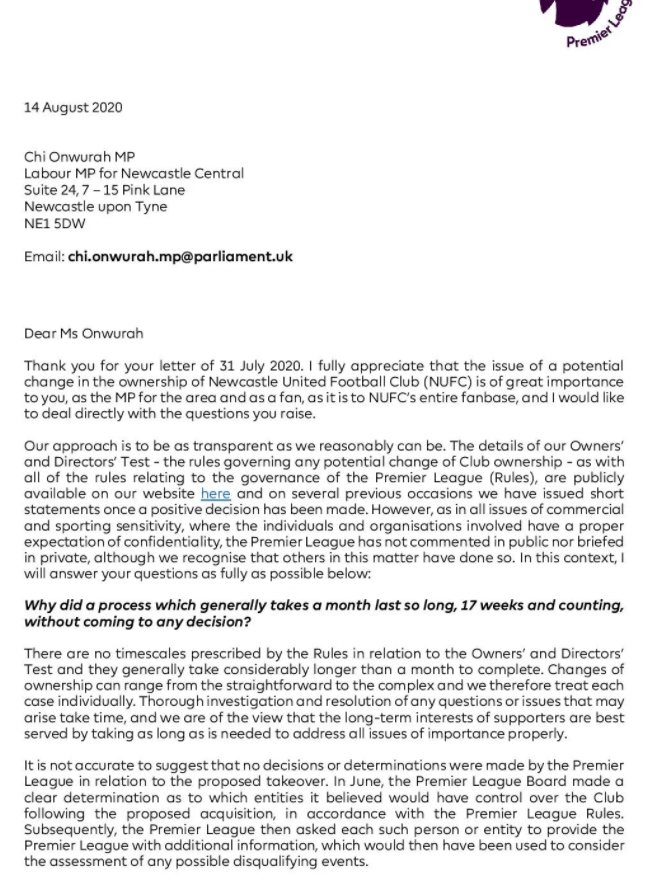 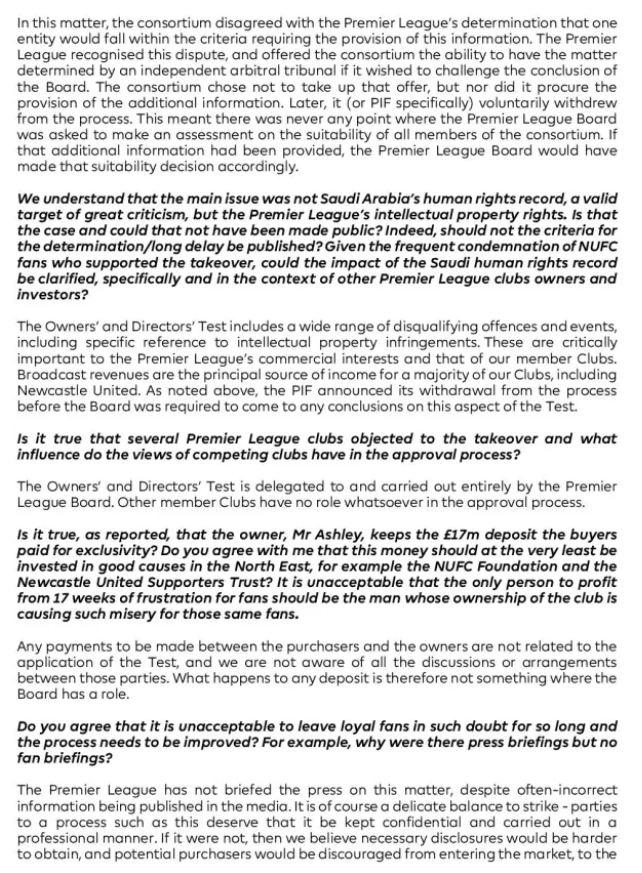 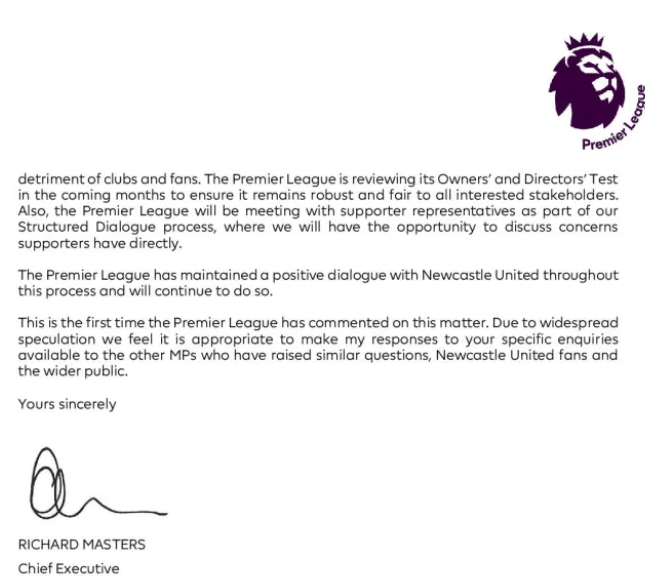 After the letter went public on Friday afternoon, Newcastle fans were quizzing Keith Downie (who covers NUFC for Sky Sports) as to why no coverage of the Premier League move on Sky Sports.

Keith responded by saying he was on his way to St James Park and would give an update very soon, which he then did…

“A source close to Mike Ashley notes the published letter by Richard Masters to MP Chi Onwurah and asks:

Doing things in a ‘proper’ way is often quite alien to Mike Ashley but we can safely assume that even though Mike Ashley didn’t directly put his name to the above, if Sky Sports talk about what a ‘source close to Mike Ashley’ says or thinks, then this is definitely a message direct from Ashley.

Presumably this was a question from Mike Ashley directed to the Premier League but little (no) chance of them answering it.

It would surely need the Saudi PIF led consortium to make a move before anything could happen, whether that would be re-engaging with the Premier League to try and reach agreement, or potentially going down a legal route.

All ifs and buts and difficult to be optimistic that something positive might happen, all eyes now on the consortium side to see if / when they will respond to the Premier League’s belated statement. The fans have done their bit so now down to the consortium to make a move.

At least we can be clear about a few things.

Mike Ashley definitely wants to sell Newcastle United at last, after over a decade of pretending he wanted to.

If Mike Ashley does have anything to tell us then he will almost certainly do it through Sky Sports, today was the third time (see the previous two below) in the past two weeks that he has used the broadcaster to put out the message that he still wants to get the deal with the Saudi PIF over the line.

Whilst finally, I think it is abundantly clear that there are no other current live alternative bidders for NUFC. With surely journalists having now to finally stop pushing the embarrassing claims that Henry Mauriss is trying to buy Newcastle United.

“We acknowledge yesterday’s statement [from the Saudi PIF backed bidders].

“Never say never, but to be clear Mike Ashley is 100% committed to this deal (sale).”

“While this doesn’t say much, it’s the very first time Newcastle United have spoken on the record since the deal was agreed with the Saudi consortium back in April.”

Sky Sports News has been told Mike Ashley remains in dialogue with the Saudi Arabia Public Investment Fund (PIF) and its partners over the potential takeover of Newcastle United.

Newcastle owner Ashley is understood to be personally trying to resolve the situation and is 100 per cent committed to finding a way to get the takeover back on.