A few years ago, I enrolled my son Blake in a Saturday morning class called Football Squirts, just after his second birthday.

The idea was well intentioned: hopefully he’d have fun, get exercise, develop his fine motor skills and potentially even gain some fledgling football skills that may prove useful should he develop the obsession with the beautiful game that so often comes with the territory in our part of the world.

As anyone who has experienced an infants football session as a parent or a coach will know (I have worn both hats) the reality is quite different.

There was a degree of wild unpredictability as to how Blake would fare in the sessions. Some weeks, he would run around enthusiastically, squealing with delight as the coach pretended to be a giant waking from his slumber to retrieve his stolen pies (footballs) and emphatically dispatching his end-of-class penalty with the confidence of David O’Leary sending Romania home from Italia ’90.

Other weeks would be very different, as all of the tools in the toddler tantrum arsenal were fully deployed as the half hour I had paid for my son to enjoy would consist of me peeling a prostrate Blake off the community centre floor, attempting to brush off the cries of “I want Mammy”, “Don’t wanna play” or my personal favourite, the timeless and ever-dignified “NEED A POO!!”

A couple of sessions even ended with a steadfast refusal to take his penalty, resulting in my having to pick him up and swing his feet against the ball in a kind of individual human football shot.

I soon realised that the decisive factor in these moods was the amount of sleep the little fella had the night before. On the day that the below story takes place, I can only assume Blake stayed up watching Match of the Day, because his mood could only be described as filthy. Having spent an undignified Football Squirts session crawling about on the floor attempting to stir some enthusiasm in an unimpressed toddler, my day was made that little bit worse when the call came through from my wife asking me to pick some things up from the supermarket on my way home.

This created a problem for two reasons. Firstly, I’m rubbish at finding my way around supermarkets as it is, and secondly, Mrs Smith tends to pull together lists of the most obscure, unrelated items that Ray Mears would struggle to track down. So hot, sweaty, agitated me sets off with a grumpy infant to get the usual essentials: plutonium, rhinoceros steaks, philosopher’s stone and the most impossible item to locate of all, tomato purée.

Anyway, I get to the supermarket and of course Blake goes ballistic from the off. I pathetically attempted some placatory methods – stern voice, bribery, even the last resort of letting him have the dummy he’d been weaned off, but nowt was getting through. As I last resort I pelted off towards some free samples, hoping that whatever it was would buy me twelve seconds of quiet, when suddenly a voice said: “Is he a Newcastle fan? Newcastle fans shouldn’t be crying now!”

Blake was still clad in his full United kit from football you see, and although I recognised the voice it didn’t click until I turned around to see the one and only Jack Charlton, pinching Blake’s cheek and enquiring as to exactly what was occurring here to cause such consternation.

Now, I don’t know if it was coincidence, confusion or just Jack’s magic touch, but Blake calmed right down there and then. Perhaps Jackie’s kindly demeanour was a better option than my own man on the edge approach, but whatever happened I was bloody grateful. I quickly pulled out the iPhone and asked if I could capture the moment, which was of course obliged, and we went our separate ways with me gushing profuse thanks. 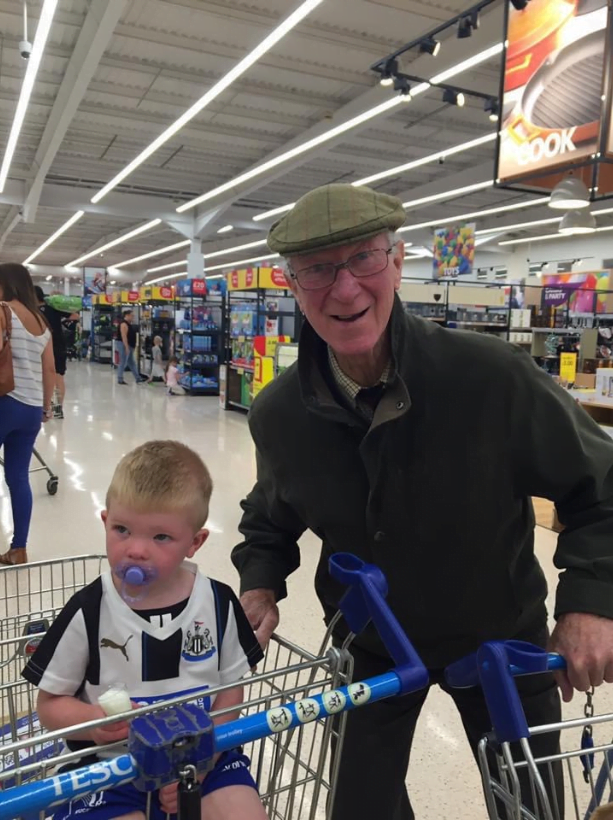 As I went about gathering the last item on the list (a balancing seal called Keith or something) I spotted Jack again, having a laugh and a joke with the store staff as a patient Mrs Charlton waited with the trolley.

I should add that the spell Jack had as Newcastle manager was a bit before my time but was an era where his popularity may not have been at its highest on Tyneside. While many of today’s fans would see a 14th place finish the season after promotion to the top flight as being just what Newcastle do, I think it’s fair to say hopes were higher then, as the team led by Chris Waddle and Peter Beardsley was remodelled to the more “functional” model of football the Charlton era Republic of Ireland would go on to demonstrate.

I would consider this a blip though, as Jack parted after one season and surely retained the goodwill reserved for our local representation in England’s proudest footballing moment in 1966. Indeed, whereas Bobby Charlton left to make Manchester United a permanent home, Jack returned to the north east and the family ties that bound him there. I think this trait will be more recognisable than any to most of you reading this, that however far Geordies may roam and however high they soar, home remains firmly where the heart is. It is this connection that makes us so fervently proud of who we are and, by extension, the club that represents us.

Following the sad news of Jack’s passing, many stories and pictures have emerged of his watching games in pubs, sharing pints with punters in the Irish Centre and generally enjoying the company of his fellow Geordies. I felt the need to share my own little tale to add to the multitude of feel-good stories.

Humility is a highly admirable trait in my opinion. Jack Charlton achieved something incredible in life and, as the countless stories emerging in recent days have evidenced, remained firmly grounded. When people use the air of celebrity not only to share their time with those that ask for it, but actively enjoy their company too, it can make the recipient feel ten foot tall.

It’s a strange thing when a celebrity dies and it gets to you on some level. Maybe in this case there are a few emotive factors. There are now less members of the ’66 team left than those that have passed on, possibly representative of the erosion of a time when football heroes were just normal, decent blokes who accompanied their wives on the weekly big shop. For me there is that brief personal connection, that my son is too young still to appreciate. One day I look forward to telling him about the time when one of our first World Cup winners took the time to sort out his toddler tantrum.

Thanks Jack, for representing the north east in one of our country’s finest sporting hours, for being a fine ambassador for our region and for quieting down the little fella that time. I’ll have a Guinness for you. RIP.

The main man at The Times sticks up for Newcastle fans – Just look at reaction from fans of other clubs!

Cash in on these Newcastle United players? Reality is it will cost NUFC to get rid of them