Paul Merson has been well and truly reeled in.

It is great how this Newcastle United takeover thing works.

The narrative is that Newcastle fans think success will be instant, that we all believe the next time we are allowed into St James Park, everybody will have a solid gold throne to sit on and be watching the most expensively stellar team in history.

Just as well we have Paul Merson to put us right…’I happen to think Ashley has done a great job at Newcastle…Ashley has been slaughtered from pillar to post, but they are still in the Premier League. They’re not a top four club and I can’t honestly see that changing.’

Newcastle United have always been top eight (or higher) when it comes to revenues in a Premier League season, so how does it equate to doing a ‘great job’ when NUFC have had one top nine PL finish during Ashley’s 13 years and have had two relegations, currently in the PL equals success???

Paul Merson declares to Newcastle fans: ‘…if they think new mega-rich owners are going to chuck countless millions at this project and suddenly make Newcastle a top four side, let me tell you, it ain’t going to happen.’

If indeed a Saudi PIF takeover is successful, then Newcastle would be backed by the wealthiest owners ever seen.

Manchester City were taken over in 2008, their Premier League finishes that followed were then 10th, 5th, 3rd and 1st.

He talks of competition for players and breaking into the top four being so tough, as though we have brilliant elite teams at the top of the Premier League. Ironic that even with our current not elite side, NUFC have already beaten Man Utd, Chelsea and Spurs this season, plus drew with Man City.

It is much more than that though, how in recent years did Man City and Spurs become seen as part on an expected top pack?  They did it in very different ways and same with Leicester, won the title in 2016 and four years later are set to finish third.

At the moment the table with less than a quarter of the season to go, shows Liverpool lead Chelsea by 34 points, 37 to Man Utd, 41 ahead of Spurs and 42 in front of Arsenal. On the other hand, Leicester are third, Wolves sixth and if Sheffield United win their game in hand, they will be fifth, only two points off a Champions League place.

Bottom line is that the likes of Sheffield United, Wolves and Leicester have all shown to varying degrees and with varying levels of relatively reasonable spending, what can be achieved. If Newcastle United end up with bigger pockets and the financial ability to keep going at it whilst adding a more and more solid financial base by increasing revenues (as Man City did), then it is very difficult to see how NUFC wouldn’t quickly be challenging.

Paul Merson says: ‘…why expect new owners, who are clearly astute businessmen, to throw money at it left, right and centre’, well to answer that you only need to look at what Man City did and why (also worth reading excellent Jamie Smith ‘Sportswashing’ article that was on The Mag on Friday), also because money will sooner or later almost certainly ensure a level of success.

Paul Merson says that players won’t come because of where Newcastle is geographically, if that is the case why does anybody go to Liverpool or Manchester? Bottom line is most players will go to a club if it is offering the right wages and matches their ambition. No reason why season after season Newcastle couldn’t become ever more attractive and in this day and age when player wages mean they can hire (or even own) private planes, if you lived to the north of Newcastle you could be up in the air in your private plane within 15 minute or so of leaving home I bet, taking you on a break to wherever or to visit family.

Paul Merson says: ‘The fans can slaughter him (Mike Ashley) as much as they like, but there are a lot of wealthy people in and around Newcastle but I haven’t see too many rushing forward to put the money up.’ 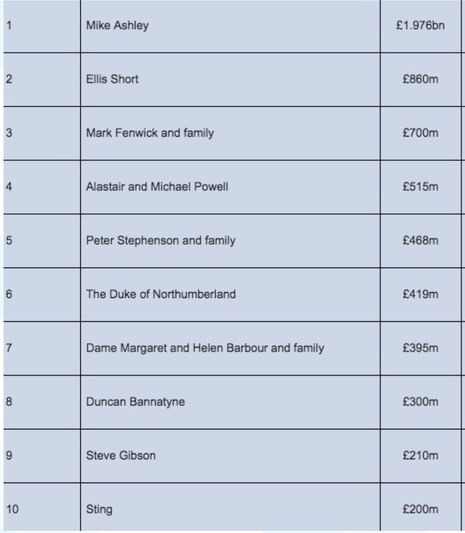 As you can see, if you accept that new owners would need to invest the same again as the £300m+ asking price, the only people ‘in the north east’ who could have privately afforded to do that, are Mike Ashley and Ellis Short! You could say the Fenwick family at a push but they would have to sell everything they own basically to fund it.

Bottom line is that for this kind of takeover, where you are looking to repair the damage of the wasted Ashley years, invest throughout the club and push on, you are in billionaire territory and none of them live in the north east.

If this Saudi PIF (or Reuben brothers alone (worth close to £20bn and second richest in UK)) takeover does happen and proper investment is made in the club, Newcastle United will compete.

‘Ashley’s 13-year reign on Tyneside really does look like coming to a close this time with talks seemingly well advanced on the £300m sale of the club…but, before too much Newcy Brown is downed to cloud anyone’s senses, delighted Geordies might seriously want to take a reality check.

Because if they think new mega-rich owners are going to chuck countless millions at this project and suddenly make Newcastle a top four side, let me tell you, it ain’t going to happen.

It’s all right everybody up there saying Mike Ashley is this or he’s that. But the fact is we can all spend somebody else’s money. The simple truth is that in the great scheme of things, Ashley just isn’t wealthy enough to dine at the top table of football.

He’s rich, but not in the same bracket as the people who run the likes of Chelsea and Man City. I happen to think Ashley has done a great job at Newcastle. The fans can slaughter him as much as they like, but there are a lot of wealthy people in and around Newcastle but I haven’t see too many rushing forward to put the money up.

Ashley has been slaughtered from pillar to post, but they are still in the Premier League. They’re not a top four club and I can’t honestly see that changing.

If the new owners chuck £600m at it – which they won’t – a place in the top four still ain’t gonna happen.

For a start, they are not going to be able to attract the very top drawer players for a variety of reasons. If there’s a really top grade player who is going to make the kind of difference needed, there will be other more ‘attractive’ clubs in for them.

It would take tons and tons of money to put Newcastle up with the elite. Liverpool are set, Man City have got fortunes and the likes of Manchester United will always be a powerhouse. To get up in that sort of company isn’t a realistic dream.

So, why expect new owners, who are clearly astute businessmen, to throw money at it left, right and centre to see an improvement of a few league places?

And listen, Newcastle are always at a big disadvantage attracting star players from abroad because of where it is geographically.

I would never do anything to spoil those magnificent fans’ celebration but they really do need to be careful what they wish for.’