Who are your favourite Newcastle United players?

There’s obviously no football on currently to discuss, nor will there be in the immediate foreseeable future.

That fact, coupled with a news story about Nolberto Solano, inspired me to write this.

My 11 favourite Newcastle United players (ED: Countdown started on Saturday, it was a monster length debut article from David so we have cut it in two, from 11 down/up to 6 yesterday which you can read HERE, then 5 down/up to number 1 below):

My mum (a Leeds fan) fancied him when he starred in Yorkshire and I didn’t realise at the time how lucky we were to be picking him up.

A great leader and spokesperson in the dressing room and on the field, a model professional, a fearless header of the ball in both boxes and a solid reliable player. Gary would deliver 7/10 every week as a minimum, 5th on the list of all time Premier League appearances with 535 despite there being nothing truly outstanding about his game; which tells you how much intangible quality he brought to a team.

He was the unassuming hero you’d follow into battle. His death and suicide was very tragic, especially as he had so much going for him in his life. I managed to attend the home game with Swansea which was our first home game after his death and opportunity to pay tribute to him. It was a wretched 0-0 of a game but it was a privilege to be there.

I’ve never played football to a high standard but I spent so much time in goal and Shay was my inspiration growing up.

Shay was an outstanding goalkeeper, one who as a fan watching any of our games you had supreme confidence in. I can’t remember him having a discernible weakness, perhaps he could have been a few inches taller if you were nit picking.

He spent 10 years at the club and his loyalty and reliability is what I admired the most. Shay had the misfortune of his time at the club overlapping with the circus that is Ashley’s ownership.

I registered the moment when his loyalty had been stretched too far and broke. It was in a 1-5 drubbing at home to Liverpool. Shay had played a blinder in that game, if not for him Liverpool would have cruised to double figures. As he walked off the pitch and surveyed the malaise around him you could see in his eyes he knew the writing was on the wall. He had a few good years left in him and was forced out by Ashley and co.

I don’t begrudge him leaving and picking up a couple of medals at Man City that his career deserved. Heartbreaking none the less to see him go and very fondly remembered.

Should have spent longer on Tyneside. He was one of the first foreign imports to the Premier League to make a sudden and lasting impact.

Probably adored by Spurs fans slightly more than us but we have loads of fond memories, none more so than the goal against Ferencváros. A corner is cleared and he controls the ball on the edge of the box on his knee, lets the ball drop to his right foot before lifting it over an onrushing defender and then volleys into the net on his left from outside the box. It’s a goal as audacious as it is technically brilliant.

Obviously he was a pacy and tricky winger that fans loved to watch but the power and grace he combined it with, made him a true joy to behold. 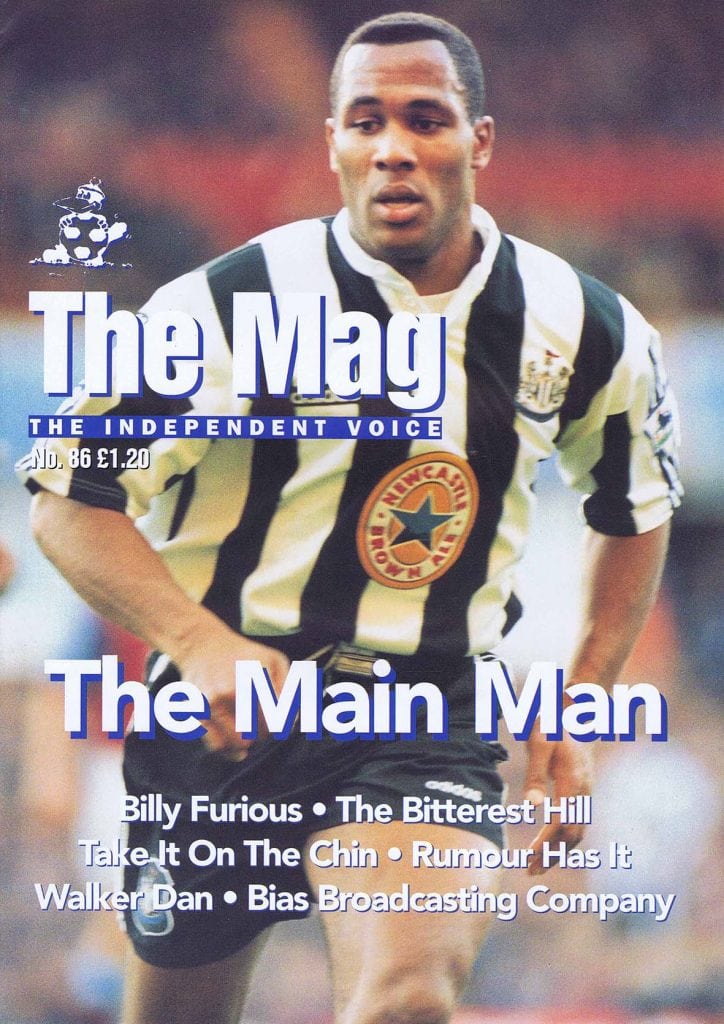 Sir Les as he became affectionately known, had a tragically short spell at Newcastle, just two seasons under Keegan. Partnered with Shearer they were an absolute battering ram of a strike force. I can’t think of anyone better in the air than Ferdinand and it’s fitting that his contribution in the 5-0 mauling of Man United was a pinpoint header that satisfyingly cannoned in off the underside of the bar.

I have a framed and signed picture of Les and Alan celebrating Alan’s goal in that game and it invokes happiness whenever I gaze upon it.
If anyone hasn’t already, it’s worth looking up his goals for QPR on YouTube. In his younger days with explosive pace to match everything else he had, he was largely unstoppable, as 80 goals in 163 games will testify. A thoroughly all-round good bloke too.

The man, the myth, the legend.

He’s the man responsible for me becoming such a massive Newcastle fan. I was crazy about Shearer and to this day Euro 96 is the international tournament I have the happiest memories of. I was slightly too young to enjoy his feats with Blackburn but when it came to choosing a team to support, his move to Newcastle sealed it.

The legend part is obviously not in question, at one point in time he could rightly have been recognised as the best striker in the world. His game had everything from an attribute point of view, combined with an insatiable lust for goals. That said, I wouldn’t say Alan was a greedy player at all, he put the team first and his loyalty to the club for a decade demonstrates this.

Alan’s 10 years at the club featured some great teams and some not so great teams but he is the embodiment of the truism that if you have a world class striker up front you’re always in with a chance. Even in the weaker teams you felt we could get a goal with Alan on the pitch.

The myth part comes in the sad reflection that he retired 14 years ago, (which makes me realise my age) it’s hard to see us ever signing a player as good again, much less keeping them for 10 years. There are young Newcastle fans who have never seen him pull on a black and white shirt, which rivals Bambi as a tear jerker.

3 Positives and 3 Negatives from Tottenham 1 Newcastle 1